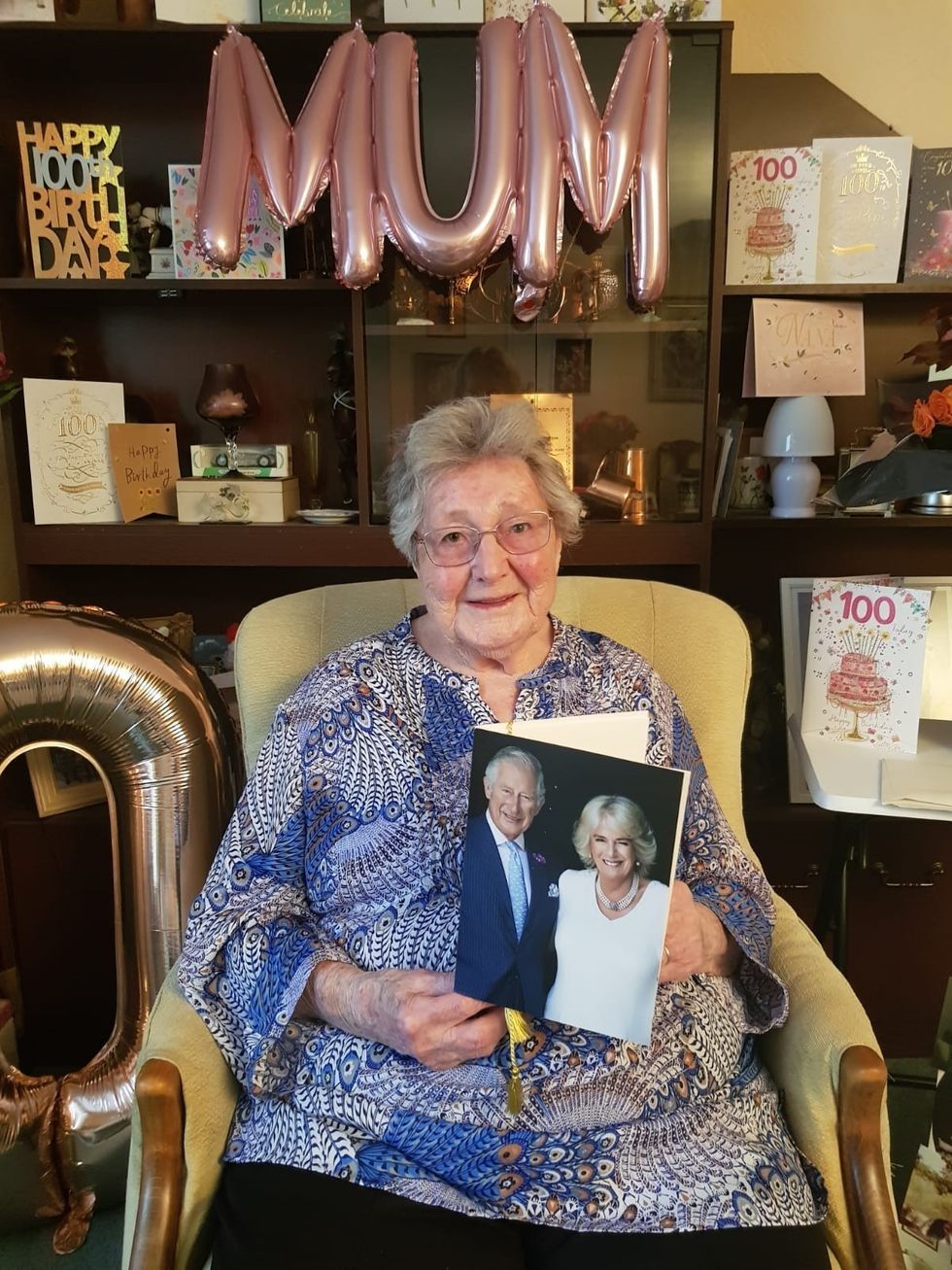 Glasgow-born Ruth Park-Pearson holding one of the first 100-year-old birthday cards, which have been signed by King Charles III and the Queen Consort (Buckingham Palace/PA)
PA Media - Buckingham Palace

A former Wren who was among the first people to receive birthday cards from the King and Queen Consort said she will proudly display their greetings.

Ruth Park-Pearson, from Tadcaster, North Yorkshire, turned 100 on Friday and was delighted when the card signed by both Charles and Camilla arrived the following day.

The greeting said: “My wife and I are so pleased to know that you celebrated your one hundredth birthday on 21st of October 2022.

“This brings our warmest congratulations and heartfelt good wishes on such a special occasion.”

The card features a photograph of the smiling royal couple, which was taken in the summer of 2018.

The message inside one of the first birthday cards celebrating 100 years of age, which have been signed by King Charles III and the Queen Consort (Aaron Chown/PA)PA Wire/PA Images - Aaron Chown

Charles became King on the death of his mother, the Queen, on September 8 and Mrs Park-Pearson is one of those who received birthday greetings from the new monarch this weekend.

“It’s lovely because it’s got a lovely gold cord through it with a tassel on the end.

“It really is a lovely card; I shall keep it very prominent so everyone can see it.”

Glasgow-born Mrs Park-Pearson, who plans to display the card on her cabinet, served in the Women’s Royal Naval Service (Wrens) during the Second World War.

Mrs Park-Pearson, who was born in Glasgow, served in the Women’s Royal Naval Service (Wrens) during the Second World War when Charles’ grandfather, King George VI was on the throne.

Queen Elizabeth II reigned from 1952 until her death in September, after marking her Platinum Jubilee.

The front of one of the first birthday cards celebrating 100 years of age, which have been signed by King Charles III and the Queen Consort (Aaron Chown/PA)PA Wire/PA Images - Aaron Chown

During her 70-year reign, approximately 1.3 million cards were sent to mark birthdays and anniversaries across the UK, the Realms and the Overseas Territories.

Mrs Park-Pearson said: “I was serving under her father if you think about it.”

She added: “You don’t think about it at the time, it’s not until later you realise just sort of how old you are suddenly. You think my goodness me; I remember the old King.

“The Queen Mother was a very elegant lady.”

Ruth Park-Pearson holding one of the first 100-year-old birthday cards, which have been signed by King Charles III and the Queen Consort (Buckingham Palace/PA)PA Media - Buckingham Palace

Mrs Park-Pearson, who has six children, 13 grandchildren and 25 great-grandchildren, celebrated her milestone birthday surrounded by family and said the special event brought them all together.

“Everybody seems to have just gelled all together, you know, the cousins haven’t seen each other for years but they all just gelled nicely together.

“Even the young great-grandchildren were happy to be with one another.

“So it was a really happy day.

“I really had a wonderful birthday I have to say.

“So many wonderful presents and flowers, I could start a flower shop almost.”

A baby Charles after his christening in a ceremony at Buckingham Palace, (left to right) with King George VI, Princess Elizabeth (later Queen Elizabeth II), The Queen Mother and (standing) the Duke of Edinburgh (PA)PA Wire/PA Images - PA

The tradition of sending royal messages to mark significant birthdays and anniversaries dates back to 1917 during the reign of George V, when those celebrating their 100th birthday or 60th wedding anniversary were sent a telegram of good wishes from the king.

They are also sent to those celebrating their 60th, 65th, 70th wedding anniversaries and every year thereafter.