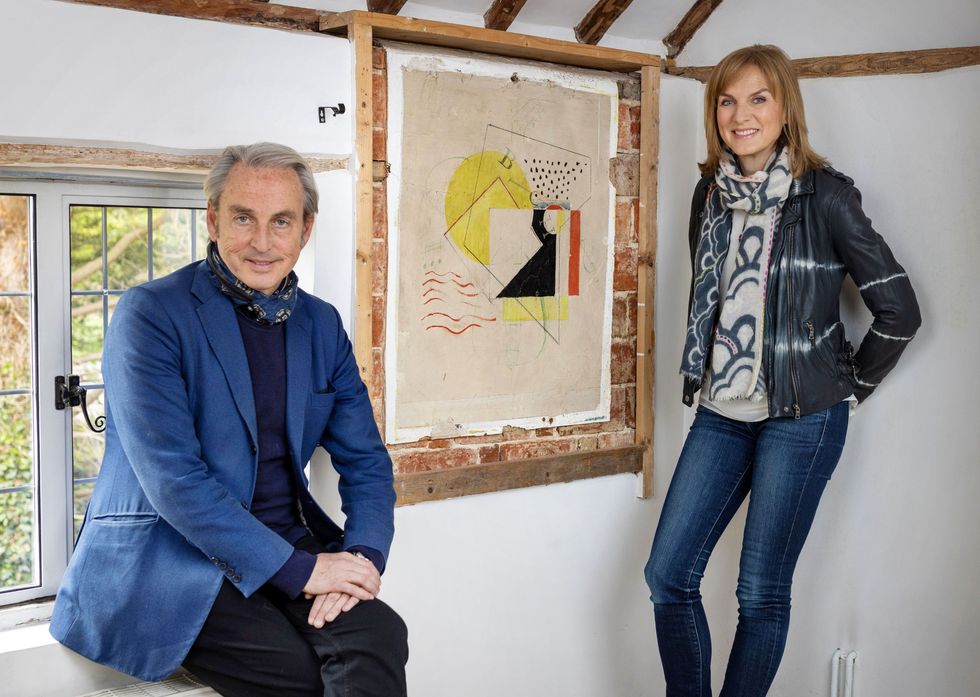 An artwork which was painted directly on a wall inside a British home has been uncovered as a rare collaborative piece by artists Ben Nicholson and Fred Murray on the new series of Fake Or Fortune?

The abstract piece, estimated to be worth £50,000-£100,000, had been displayed in the spare bedroom of a cottage in Surrey, owned by couple Ian and Julie, for the last 20 years.

They had previously been told it was an original Nicholson by an elderly neighbour who knew the previous owners but finding out the truth had become a matter of urgency as their home was undergoing construction work which could damage the piece permanently.

#Fakeorfortune starts this coming Tuesday at 8.00pm with a double conundrum. Is this mural - painted straight onto… https://t.co/oUvlLYK4QP
— Philip Mould (@Philip Mould) 1660909291

In order to get to the bottom of the mystery, they turned to the BBC show for the investigative skills of art dealer Philip Mould and presenter Fiona Bruce.

In the first episode of the show’s 10th series, Mould and Bruce consult specialists of the artist, museum curators and the family of the home’s previous owner to find out answers.

If the painting was to be a genuine Nicholson piece, Mould had estimated it could be worth £200,000 as the artist was regarded as “a key figure in European avant-garde” and his artworks have sold for more than £1 million.

This particular artwork depicted a lot of geometric shapes and bright colours which were evident in Nicholson’s other works.

Through the team’s investigation, they discovered that Nicholson had been close friends with the former owners of the Surrey cottage – Madge and Fred Murray – after they found letters sent between them.

Fred Murray had also been a painter and sculptor and a sponsor of Nicholson in his early years.

After the art experts considered the letters proving Nicholson stayed at the cottage and the painting itself, they drew their conclusion that he was likely to have partially created the piece.

Their evaluation said: “We are of the opinion that this work does contain elements consistent with the work of the artist Ben Nicholson.

“However, we also strongly believe that parts of the composition are by a different hand, most likely that of Fred Murray.

“It’s our conclusion that this artwork is probably an informal collaborative piece, and potentially the results of a playful artistic dialogue between Ben Nicholson and his close friend and supporter, Fred Murray.”

Despite it potentially not being an original, Mould assured the current owners of the work of art that this was still good news.

He explained: “We’re dealing with something most unusual – a collaboration with Ben Nicholson and another artist, something he wasn’t known to have done.

“He was an amateur but he was somebody who could paint and also a pivotal part of his life so it’s entwining two crucial figures together who were connected to each other. It’s a very personal thing.

“I can imagine lots of people being both intrigued and drawn to it, and potential collectors as well.”

After Mould estimated the value between £50,000 and £100,000, the couple confirmed they would have the segment of the wall with the artwork painted on carefully extracted so it could be sold.

Nicholson, the son of artists Sir William Nicholson and Mabel Pryde, died at the age of 87 in 1982 and according to the Tate is “recognised as a leading exponent of the modern movement in Britain”.

After discovering cubism, the art form would go on to influence his work throughout his life, with the work of Dutch painter Piet Mondrian often cited as another of his inspirations.

– Fake Or Fortune? airs on BBC One at 8pm on Tuesdays.

Please log in or register to upvote this article
ArtFiona Bruce