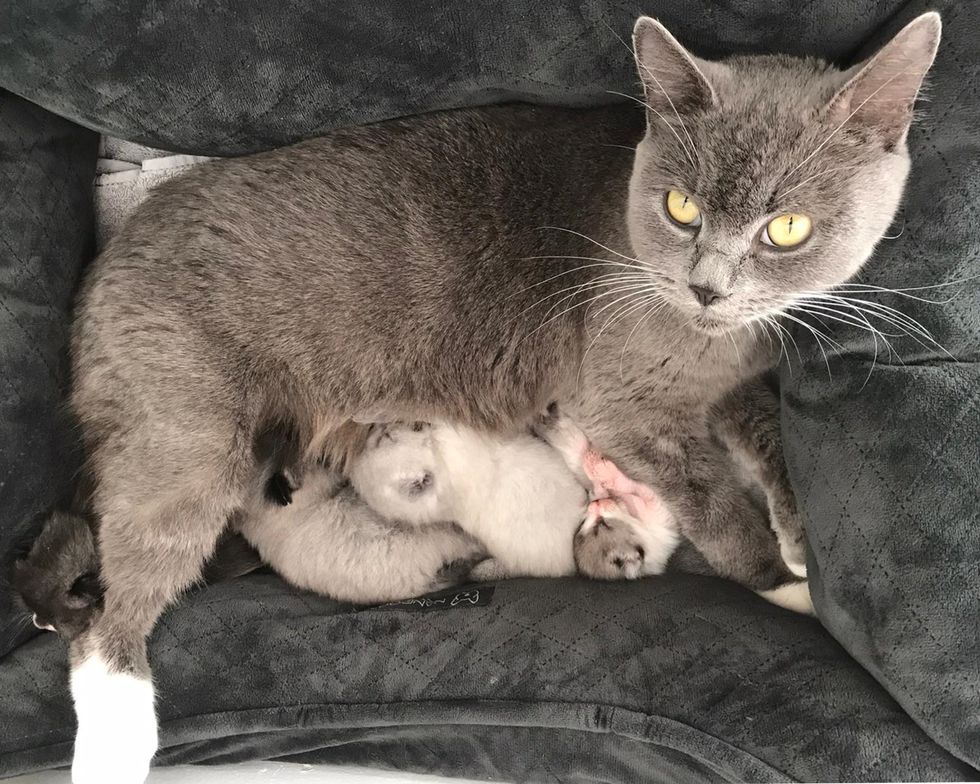 A cat who had been missing for nearly five months and her four kittens are home safe after they were found in an electrical substation sheltering under leaves, cobwebs and a crisp packet.

Bella, a three-year-old grey-blue British shorthair, had tucked her kittens away from the elements and under a cabinet that stores electrical equipment when Garry Black and Terry Amor, low voltage fitters for Scottish and Southern Electricity Networks, came upon them while working near Albion Towers in Southampton.

Initially thought to be a stray, Bella had a microchip that was found on the second scan and was soon returned to her “delighted” owners, who believed she was “gone forever”.

Terry Amor and Garry Black with Bella, who they found in an electrical substation in Southampton (SSEN/PA)

The four kittens, including grey-furred Milos and his black-and-white brother Luka, were all found healthy and rehomed.

“Sometimes we’ll see birds and smaller animals around the substations as they can provide some warmth during winter months, but we didn’t expect to find five healthy felines when we removed the cabinet cover,” Mr Black said.

“We think the mother cat must have squeezed into the cabinet through the small ventilation gap at the bottom of the cabinet door before she had the kittens, as it would have been difficult for her to come in and out of the small space carrying each one after they were born.”

The animals were taken to Cats Protection’s Southampton Branch.

The cats were all deemed healthy after a check (SSEN/PA)

The branch’s welfare team leader, Steve Ridd, explained: “Once we had the details, we were able to contact the owners and discovered their cat Bella had disappeared in May.

“They were delighted to have their cat back but had recently got another kitten because they believed Bella had gone forever and so asked us to rehome her kittens.

“Now 10 weeks old, they have had their first vaccinations and have all been found new homes.”

The kittens are particularly enjoying playing with toy mice and feathers.

The four kittens have been rehomed (Cat’s Protection)

Mr Amor added: “It’s great to see that Bella has now been returned home and that her kittens have found their fur-ever families.

“Garry and I knew as soon as we saw her that we had to do the best for her and her kittens, and it’s through Cat Protection’s perseverance in tracking the owner that we now have a happy ending for all.”

Please log in or register to upvote this article
AnimalscatsCats ProtectionHampshireSouthamptonUplifting