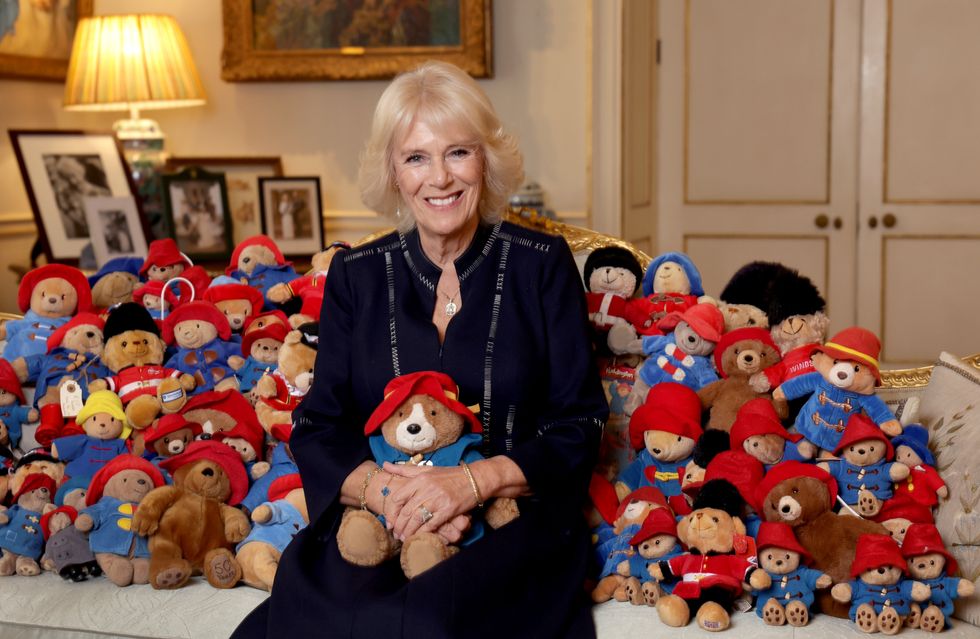 The Queen Consort is pictured surrounded by teddies in a new image released to mark the donation of more than 1,000 toy bears to the Barnardo’s children’s charity.

The bears – made up of Paddingtons and other teddies – had been left by members of the public outside Buckingham Palace and Windsor Castle in the wake of the Queen’s death last month.

The toys have been collected, professionally cleaned and will be delivered to Barnardo’s children’s services in the coming weeks, Buckingham Palace said.

In a photograph to mark the occasion, Camilla is seen smiling broadly while sitting on a low sofa in the Morning Room at Clarence House wearing a navy blue dress with white stitching, clutching a Paddington bear on her lap and surrounded by other teddies.

The picture was taken on Thursday, which was the 64th anniversary of the publication of the first Paddington bear book.

The Queen’s Platinum Jubilee sketch in the summer saw the Peruvian bear visit Buckingham Palace for afternoon tea, during which the Queen produced a marmalade sandwich from her handbag.

It prompted mourners to leave teddy bears and even some of the tasty treats among the floral tributes which amassed outside royal residences following her death in September.

In 2016, the Queen passed the patronage of Barnardo’s to Camilla, who was then the Duchess of Cornwall.

A tweet from the Royal Family’s official account, accompanied by the newly-released picture, stated: “Please look after this bear.”

It added: “The bears have been scrubbed up to look their best ahead of arrival at their new home.”

Barnardo’s chief executive Lynn Perry said: “Her Majesty Queen Elizabeth II was Barnardo’s patron for over 30 years, and we are honoured to be able to gives homes to the teddies that people left in her memory.

“We promise to look after these bears who will be well-loved and bring joy to the children we support.

“We are incredibly grateful to Her Majesty The Queen Consort for her support in helping us to raise awareness of the needs of vulnerable children and young people in the UK so that we can continue to support them through our vital services.”

Tom Jarvis, director of parks at the Royal Parks charity, said: “Over the last few weeks, we have been looking for a fitting and appropriate use for the hundreds of teddy bears that were left in Green Park and Hyde Park to honour the Queen.

“We are delighted that the teddy bears will now bring joy and comfort to hundreds of children supported by Barnardo’s.”

Buckingham Palace said the teddies were being “well looked after” at the palace, Clarence House and in the Royal Parks nursery in Hyde Park.

The toy bears collected then will join those left as tributes on the Long Walk outside Windsor Castle in being cleaned and donated to Barnardo’s.

5 times Nicholas Witchell came under fire for his royal analysis

Protester throws eggs at King Charles during trip to York