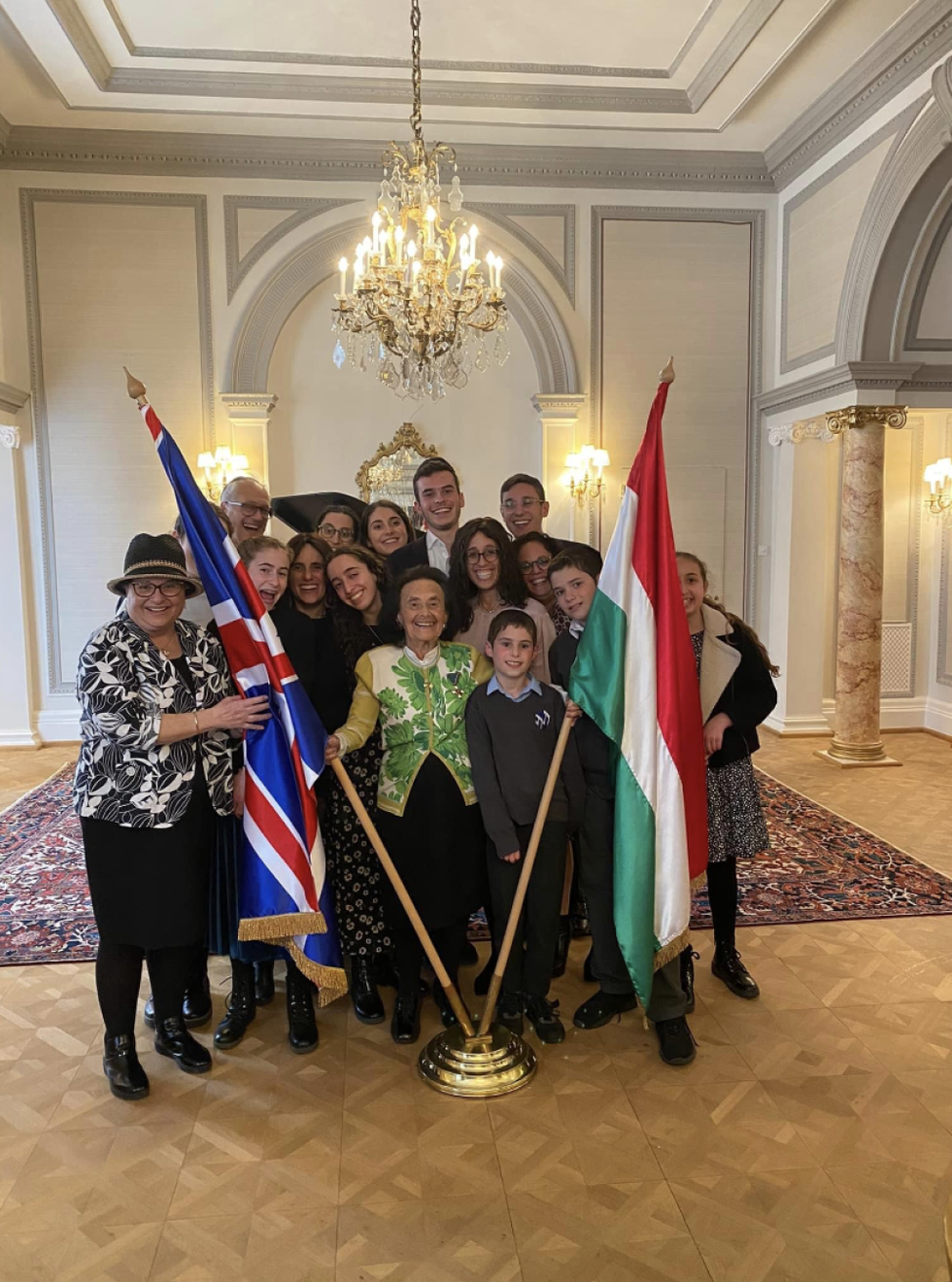 Lily Ebert, 98, was surrounded by her family as she was awarded the Knight’s Cross of the Hungarian Order of Merit on Tuesday for her work on educating people about the Holocaust (@DovForman/PA)

One of the UK’s last living Auschwitz survivors has been presented with a national honour from Hungary at the country’s embassy in London.

Lily Ebert, 98, was surrounded by her family as she was awarded the Knight’s Cross of the Hungarian Order of Merit on Tuesday for her work on educating people about the Holocaust – including being a founding member of the UK’s Holocaust Survivor Centre.

The medal celebrated the life of Ms Ebert, who grew up in Hungary and spent four months at Auschwitz before her liberation by American soldiers in April 1945.

“I am so honoured and touched to receive this award,” Ms Ebert said in her speech at the award ceremony.

“When I was in the hell of Auschwitz I promised myself, if I survived against all the odds, I would do all I can to share my story, for myself and for those that did not survive. And I do.

“I am so pleased to be standing here today and to know that my story is being recognised and heard.”

Ms Ebert was freed from Auschwitz at the age of 20, 77 years ago, and spent a year in Switzerland before moving to Palestine-occupied Israel in 1946.

She migrated to the UK in 1967 with her husband, Samuel, and began a life of educating the world about the horrors of the Holocaust.

She is now based in north London, and is a mother of three, a grandmother of 10, and became a great-grandmother for the 35th time in January this year.

“It was absolutely incredible to see how accommodating the Hungarian embassy were and how nice they were, and how really proud Lily was,” one of Lily’s great-grandchildren, Dov Forman, told the PA news agency.

“She had a smile on her face the whole day.

“When the Nazis invaded, Hungarian soldiers were there – they helped to move them to ghettos, helped to load them up on the train to Auschwitz.

“So she never thought in those moments that, almost exactly 78 years later, she would be standing in the embassy receiving one of the highest state awards.”

“He promises and he pledges to continue to spread these messages as much as he can as a spokesperson for the government,” Mr Forman said.

“But also because he wants to acknowledge how the Hungarians want to, in any way possible, recompensate.”

Mr Forman, 18, said the day was “very special” for Ms Ebert – who was given a message from President of Hungary Janos Ader, and treated to a dinner after the ceremony.

It was very, very special for all of us

“I was very honoured that I could go up there together with my great-grandmother and see her being awarded this honour,” Mr Forman said.

“I was able to give a speech and speak about how appreciative we are of their support.

“The (Hungarian) ambassador (to the UK) has been a great friend to me and my great-grandmother over the past year – since he saw us on TikTok, actually, which is quite funny.”

The A-level student’s TikTok account for Ms Ebert and her stories has a following of more than 1.9 million.

He has even co-authored a book with Ms Ebert titled Lily’s Promise, which tells of the life she has built for herself and is a Sunday Times bestseller.

“I think the main thing was that we were able to have all the family there,” Mr Forman added.

“My great-grandmother was was taken to Auschwitz-Birkenau and her mother, younger sister and brother were murdered and she never saw them again.

“So to see her there with so many members of her family… It was very, very special for all of us.”

Holocaust survivor explains why she won't remove her Auschwitz tattoo

Please log in or register to upvote this article
AuschwitzHolocaustHungary