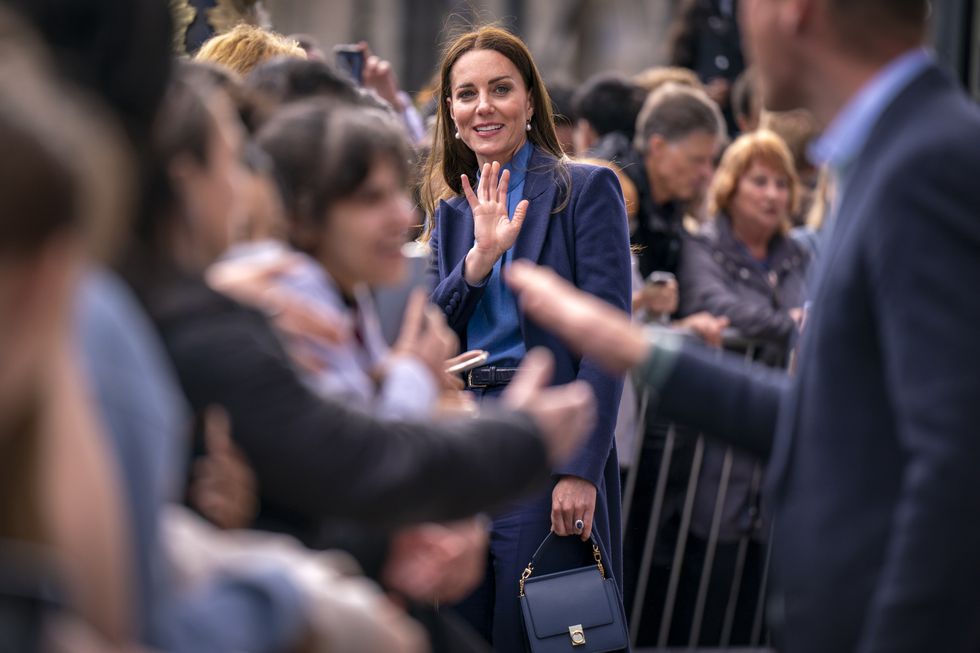 The Duchess of Cambridge during a visit to the University of Glasgow in Glasgow, to talk with students about mental health and wellbeing – particularly pertinent during what is exam season at the University (Jane Barlow//PA)
PA Wire/PA Images - Jane Barlow

The Duchess of Cambridge was left beaming when she came to the aid of a student stumped by a crossword puzzle question about the royal family.

Kate put her knowledge to the test during a visit to the University of Glasgow where she heard how students have been supporting each other during the pandemic and the city’s community struggling to get online.

William joined his wife for the trip to Scotland and earlier joked about Kate becoming broody when they visited a school where she cuddled a baby, sang along with children and spoke to young pupils.

As the couple began their visit to the school, close to the banks of the River Clyde in Inverclyde, the duke joked: “Can you get my wife out of here before she gets broody?”

Jack Baird, 21, a statistics student, tested the future Queen’s knowledge of royal finances when the Cambridges went on a walkabout outside the James McCune Smith learning hub, the main campus building for undergraduates.

He said: “I was stuck with my crossword from The Times, I do it every week.

“It was seven down and the clue was sovereign’s annual allowance.

“I knew it was civil ‘something’ and I asked Kate and she said ‘civil list’.

“She looked very excited when she got it.”

The 21-year-old, from Lisburn, Northern Ireland who said the crossword was from last week, added: “She looked thrilled I think she thought ‘I wouldn’t live this down, if I get this wrong’.”

The student confessed to being a concise crossword fanatic, and after pulling a large selection of puzzles from a pocket was ribbed by friends who said he had been known to ask people for answers when queuing outside Glasgow clubs.

William had also joined his wife during the walkabout in Glasgow and earlier they had met students who described a project that provided the community with laptops, free internet and IT mentoring to get them online, when many activities moved onto the internet during the pandemic.

Earlier in the day William and Kate toured St John’s Primary School in Port Glasgow to learn about an innovative project where children interact with a mother and baby to learn about its development and aid their emotional empathy with others.

They watched as Laura Molloy brought her 10-month-old baby Saul for a regular session where the children quizzed her about the infant.

Action for Children, which runs the programme in 18 local authority areas in Scotland, says the sessions, where the pupils are also guided in discussions about their own emotions, improves the behaviour of youngsters, who are kinder with less instances of bullying.

The Cambridges sat cross-legged on the floor with around 35 other children as Saul crawled on a mat, sang nursery rhymes with the children, and they even did the hand actions to Incy Wincy Spider.

Kate asked the group of around 35 seven-year-olds: “Do you think lots of schools should have a project like this?”, and when some replied “Yes”, she added “We do too”.

The duchess later chatted to the mother and her baby, and she briefly held Saul, who will celebrate his first birthday in June, but he quickly stretched out his hands for his mother.

During their day in Glasgow the Cambridges also met people helped by the housing, care and property management group the Wheatley Group at one of the organisation’s sites in the Kennishead area of Glasgow.

They learned how the group is helping to transform the lives of disadvantaged or vulnerable people, including those at risk of homelessness.

The Cambridges stepped into home of mother-of-four Joanne Wales, 31, and sat on sofas in her sitting room as they asked about her experiences as a tenant.

Her four-year-old son Jason showed the royal couple his Spider-Man and Hulk toys, and Kate told him: “Louis, our little boy, loves Spider-Man too.”

Joanne Wales, who has been a single parent since her partner died nearly two years ago, said she enjoyed talking to the couple.

The mother, whose children are aged between four and 12, said: “They were absolutely lovely and straight away they were talking to Jason about superheroes.”