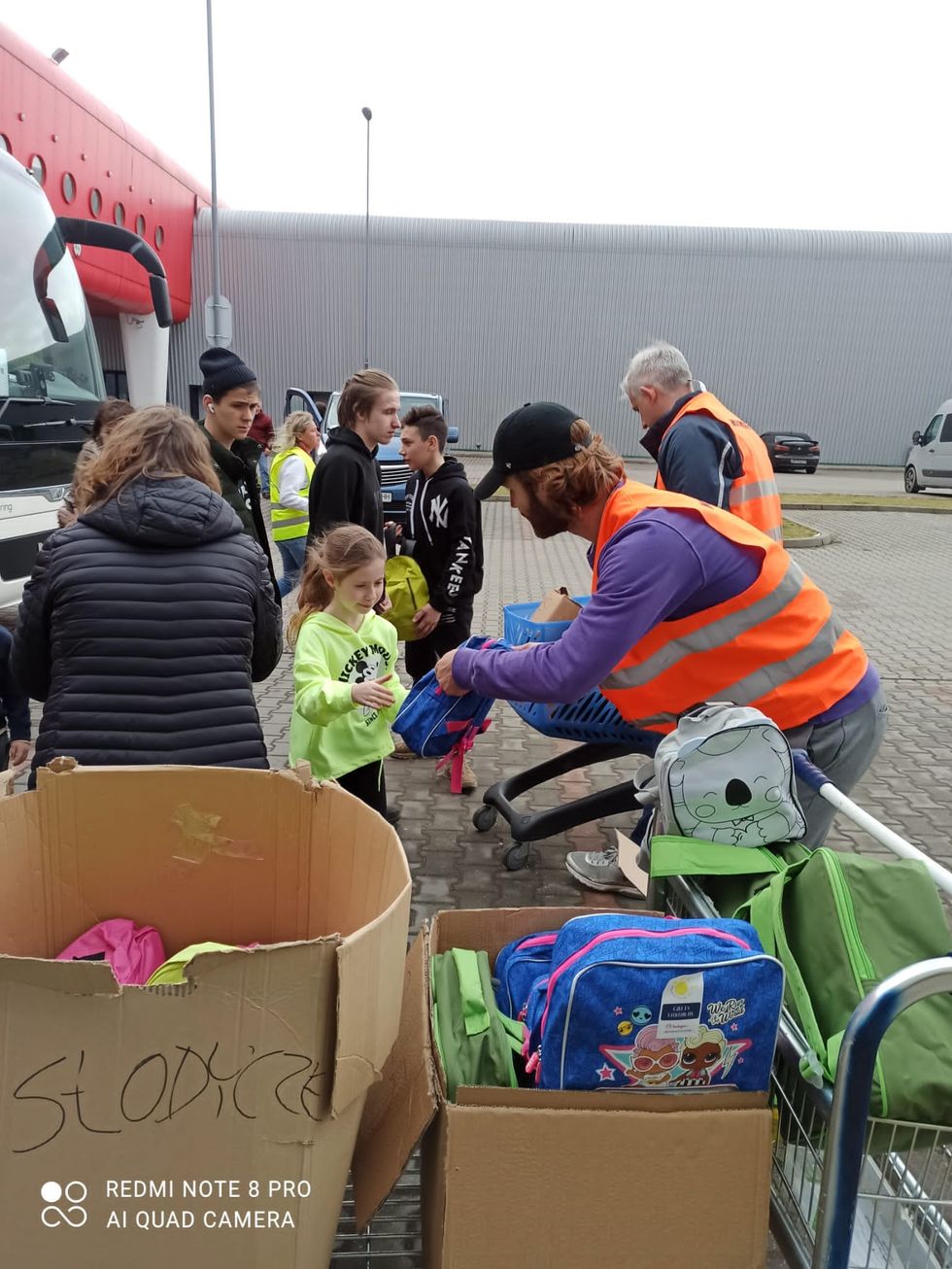 Two British friends have raised more than £4,000 to fund “kindness backpacks” given out to Ukrainian refugee children in Poland.

Stuart Thomas, 43, and Neil Spalding, 30, travelled earlier this month to help out at a humanitarian aid centre set up at the Warsaw Expo Centre in Poland’s capital, where refugees stay briefly after leaving Ukraine before moving on to more permanent locations.

While there they were involved in putting together and distributing the so-called kindness backpacks, which were the brainchild of one of the women working at the centre, Marta Szyjkowska, and are designed to be both fun for the displace children as well as practical.

Neil Spalding, left, and Stuart Thomas spent a week at the centre in Warsaw (Stuart Thomas/PA)

As most of those at the centre will undertake bus journeys of up to 40 hours to their next location, the bags contain things to keep them entertained on the trip like toys and games, as well as gifts from shops including Claire’s Accessories and bars of chocolate.

The backpacks will also function as schoolbags when the children reach their next destination.

Mr Thomas, who works in business-to-business exhibitions, told the PA news agency: “Marta came up the idea that she wanted children, when they’re leaving the relocation centres, to have a couple of things.

“She wanted them to have something to do on that bus journey, and she also wants them to feel a moment of kindness – the fact that people really cared about them.”

Mr Thomas and Mr Spalding, from Clapton in east London, spent the first couple of days in Warsaw helping to put the bags together.

The backpacks were the brainchild of Marta Szyjkowska, right (Stuart Thomas)

They were then given the job of handing out bags to youngsters leaving the centre – the first time they had visited where the refugees were sleeping.

Mr Thomas, from Stansted Mountfitchet, in Essex, said: “We turned the corner and I think in my life I’ve never just frozen by being so overwhelmed with emotion, because there’s people who are just… uncontrollable tears, you know when people cry but uncontrollably?

“I’ve got two young boys, I’ve got boys that are 11 and eight, and so a couple of these boys got off the bus together and one of them, my lad plays football all the time and this lad obviously did as well, he’s got all the Adidas sports stuff on and I was like ‘that’s just my boy there’.

“So I think the first time, we found it exceptionally difficult and I’d say we’re pretty useless actually.”

During their week at the centre, Mr Thomas said the pair, who became friends through playing rugby and cricket together, helped to hand out between 400 and 500 bags.

Hundreds of backpacks have already been distributed (Stuart Thomas/PA)

But with stocks running low, they are now raising funds to be able to distribute more when they return to the centre next week.

Mr Thomas said the packs were “massively appreciated” by both the children who received them and their parents.

“We’re not changing the world and I completely get that, but it’s creating small moments of happiness,” Mr Thomas added.

Ukrainian mother and six sons given keys to their new home

Website lets you prank call Russian officials to distract them

Here's why you really shouldn't be tweeting about 'nipplegate'