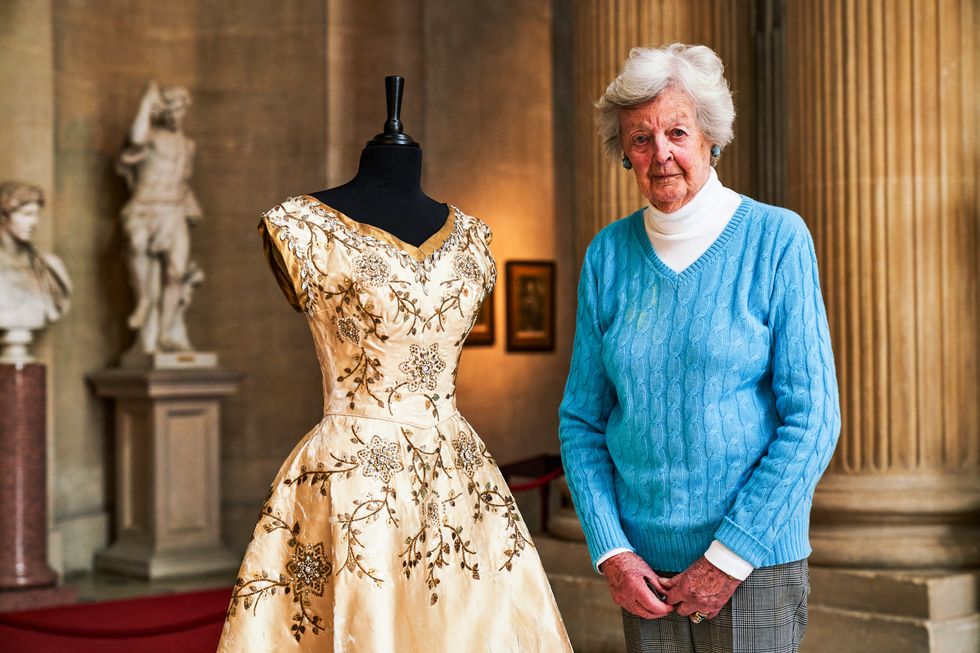 Lady Rosemary Spencer-Churchill, who was one of the Queen’s Maids of Honour at her Coronation, said she was ‘overwhelmed’ after being reunited with the dress she wore following its restoration (Quest/PA)

One of the maids of honour at the Queen’s Coronation was stunned after being reunited with her dress which had “seemed to disintegrate in one’s hands” before its restoration.

The silk gown Lady Rosemary Spencer-Churchill wore on June 2 1953 had suffered extreme sunlight exposure after years on display, causing the material to become “split and shattered”.

Designed by Sir Norman Hartnell, who held the Royal Warrant as dressmaker to the Queen Mother, the garment remains a piece of British history.

Textile conservator Emma Telford spent 400 hours making invisible repairs to the fabric in order to repair the delicate and irreplaceable dress, in scenes filmed for the new series of Nick Knowles: Heritage Rescue.

Having last worn the priceless gown in 1953, Lady Rosemary said: “I think it’s unbelievable. When I first saw it, after it had been damaged, I thought there was no hope for this.

“It seemed to disintegrate in one’s hands, and I’m just overwhelmed by what’s been done. I think it’s going to go on exhibition, and hopefully will be well looked after.”

Lady Rosemary said that seeing the dress brought back memories, recalling her duties on the day.

She said: “We’d been trained so well by the Duke of Norfolk. We had so many rehearsals, we never thought anything would go wrong, and it didn’t.”

Asked whether the Queen was nervous on Coronation Day, Lady Rosemary said: “She certainly didn’t show it.

“When we started off, the six of us, she turned around and she just said ‘Ready, girls’ and off we went – she was wonderfully relaxed.”

Ms Telford said: “I felt very nervous and quite anxious about today, for a few weeks. Wondering if it was actually going to be ready in time. It was lovely to see that reaction.”

The dress had suffered significant damage around the bottom and the material had begun to shred, though the front of the gown had remained in good condition and the beadwork had survived almost entirely intact.

Ms Telford used support fabric with adhesive to bond the fragile silk of the dress and stabilise the damage.

She said: “There’s really no option with an item that’s in that kind of condition.

“An adhesive support is really a last resort for textile conservators, but this is very much a last gasp for this item as it really is in such poor condition.”

Why has it taken so long for Charles to be coronated as King?