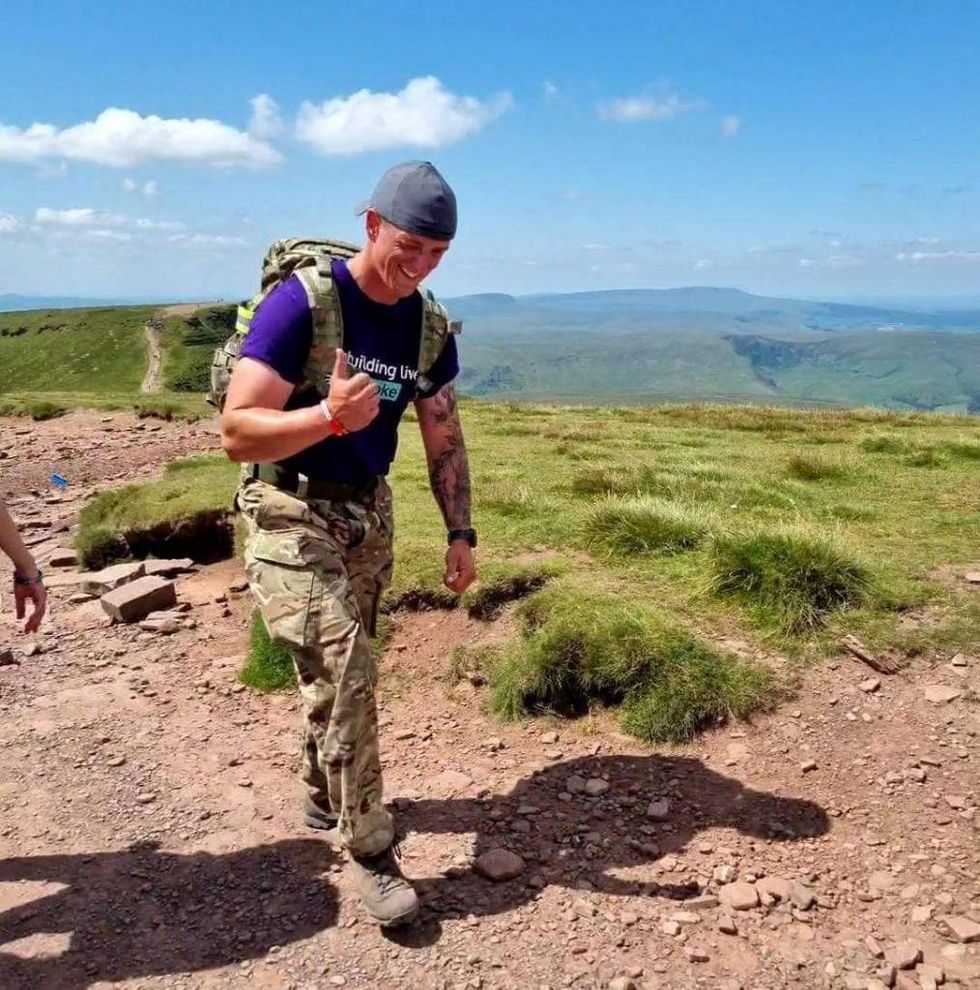 Roberson training in the Brecon Beacons with his First Fusiliers army regiment. (Handout/PA)

A soldier with post-traumatic stress disorder is to scale one of Wales’s tallest peaks with a rowing machine strapped to his back to raise money for the veterans’ mental health charity that helped him through times of crisis.

Royal Fusilier Jonathan Roberson, based at Tidworth in Wiltshire, will climb up and down Pen y Fan – the highest mountain in the Brecon Beacons – on Saturday, as many times as possible in 24 hours.

Along with the 26kg rowing machine, the 28-year-old will also be carrying a 3kg medicine ball, and each time he reaches the summit he plans to row the height of the mountain before heading back down again.

He could achieve two Guinness World Records for his efforts: most repetitions of Pen y Fan in a full day and most hikes completed carrying a rowing machine.

He told the PA news agency: “The minimum I have to do is six repetitions. So that’s up the mountain carrying the rowing machine, rowing the height of the mountain, and back down again. That’s one repetition. But I plan to do 10.

“Being in the military, Pen y Fan is like the gold standard. No matter what corps you’ve been in you’ve done the Fan and so that’s why I chose it.

“But when you’ve been up there in all weathers with an exercise kit weighing anything up to 40kg it gets a bit easy. So I thought, ‘what can I carry?’

“I was in the gym at the time and I looked down and saw the rowing machine and was like, ‘I wonder if I can carry that?'”

He has planned for 20 minutes of rest at the base in between sets, which he believes will each take two and a half hours.

Mr Roberson’s challenge is in aid of Combat Stress, which supports current and former members of the UK armed forces.

Originally from Newcastle, he joined the Army in 2013 and became a tracked armoured vehicle driver and gunner. In 2016, he qualified as an Army physical training instructor.

In 2017, due to a hole in his heart, he suffered a stroke during a strongman event and spent 13 days in hospital learning how to walk and talk again.

He spent weeks in a rehabilitation unit and in 2020 had heart surgery to close the hole in his heart.

But his years of illness had a profound effect on his mental health and he began to struggle.

“For the past five years I’ve had a lot of medical issues and it resulted in me being diagnosed with PTSD,” Mr Roberson said.

“When I first got diagnosed, I thought, ‘I don’t have that’. I had real stigma and I tried to do it myself, tried to grit it out, think to myself ‘man up’. But that just did not work.

“I was mentally ill and it was making me even more physically ill too – I wouldn’t eat, couldn’t sleep and I was moody, stuff like that. So I reached out to the Combat Stress helpline.

Jonathan Roberson at the top of Pen y Fan, carrying a log he trained with (Handout/PA)

“The first time I spoke to them I spent like three or four hours on the phone. It felt good to talk to someone. And I just kept calling back and each time I felt better. There was absolutely no judgment.

“It has helped me massively which is why I wanted to raise money for them. I have been diagnosed but they’re unsure how severe my PTSD is yet. But there are others out there suffering much worse and I want that help to be there for them.”

He said he is now able to focus on being a father to his five-year-old girl.

He added: “Along with raising money for and awareness of the charity I’m hoping I can do more and help hopefully break the stigma of mental health.”

Mr Roberson has trained by walking up the mountain carrying a 4ft, 16kg log, and has met dozens of people interested in what he is doing, and he hopes to meet more during his challenge.

For those who cannot make it to the mountain he plans to document his progress on his Instagram page: instagram.com/jonny.robo23/

His fundraising page is at justgiving.com/fundraising/Jonathan-Roberson1