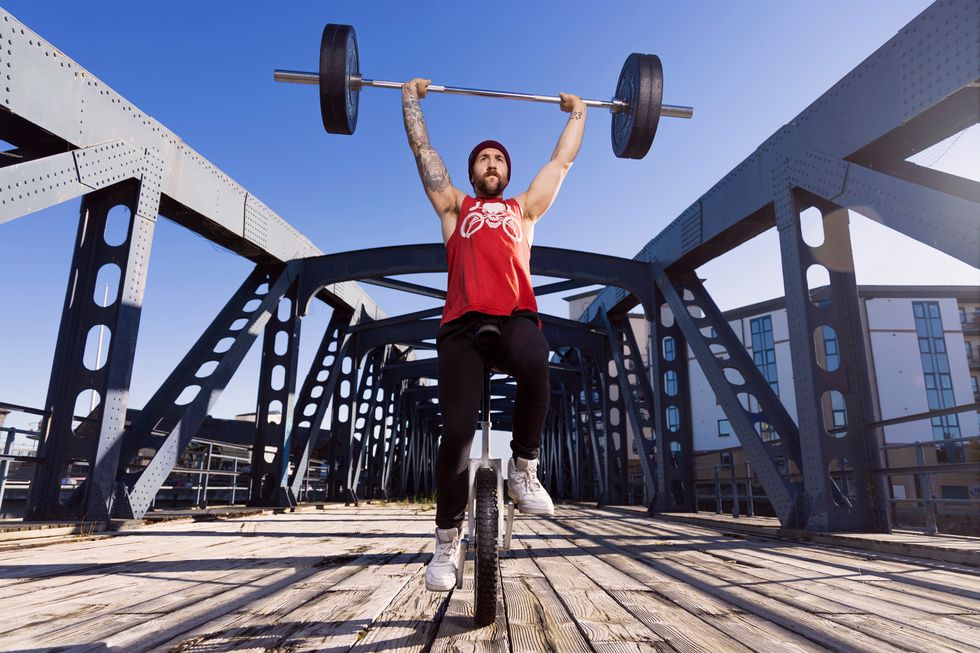 A self-professed “extreme sports superstar” with a passion for unicycling and weightlifting has said it is a “real honour” to be part of the latest Guinness World Records book for a unique act.

Jason Auld, a professional unicyclist from Edinburgh, achieved the world record for the heaviest single weight (68kg) lifted by barbell overhead press while riding a unicycle, and told the PA news agency that waiting for the “cool” news was like waiting for exam results.

“You have to send in all your evidence like photos and videos, and you need adjudicators to make sure you have done all that you need to to get the record,” the 34-year-old said.

“I remember getting an email to say I got it and it was cool. It feels so good when you finally get the news when you have been waiting for so long – I guess if people have ever waited for exam results or something like that it is quite similar.”

Mr Auld said he wanted to “try and do something different and new”, and made his attempt on April 5 last year.

“What excites me is the prospect of ‘can we do this?’ Is it possible?'” he said.

“I like to try and do things that people haven’t really thought of.”

Having unicycled for around 20 years – 15 as a professional – and lifted weights since he was a teenager, the record attempt seemed like the perfect fit for Mr Auld, who used lockdown as an opportunity to “combine the two”.

“During the pandemic, there were no events to entertain people and that kind of opened up an avenue for me in terms of just exploring something a bit different with what I do,” he said.

“I thought, why not combine an overhead press and unicycle to try and create something new.”

An eight-week training programme involved Mr Auld improving his overhead press, with his feet on the ground and using the unicycle to work his stabiliser muscles.

Mr Auld, who is also a coach for assault course TV show Ninja Warrior, said he grew up during a time when extreme sports were mainstream, including the X Games, which fuelled his desire to take on new challenges.

He also achieved a world record on March 20 2016 for the fastest 4 x 50-metre unicycle hurdle relay, with a time of one minute, 33.49 seconds, as part of Voodoo Unicycles (UK), alongside Simon Berry, Mike Taylor and Rob Terry.

He added that the approval and verification process for that challenge took a bit longer because it was a new category.

“The guys at Guinness have to look over it and make sure that it’s something worth doing, something that’s measurable and easy to replicate for future people,” he said.

He added that being selected for the 2023 Guinness World Records book was “even more meaningful”.

“The book is kind of part of the fabric of our culture, really, as I think everyone has memories of the Guinness World Records as a kid at Christmas.

“And to be a very small part of that, it feels a lot more meaningful than just breaking the record itself – that was very humbling, for one, and a real honour to be part of it.”

He said that as a child, the unconventional records stood out to him “a little bit more”.

“That would catch my eye and it probably has influenced me in some way, shape or form, and I cannot believe it is still relevant,” he said.

He hopes his story shows that “if you have an idea and if you believe your idea is possible and you’re passionate enough about it, you can get there”.

Guinness World Records 2023 is available in stores and online.

Prince Harry admits he and Meghan met on Instagram

Meghan struggled to choose between Prince Harry and William in 2015