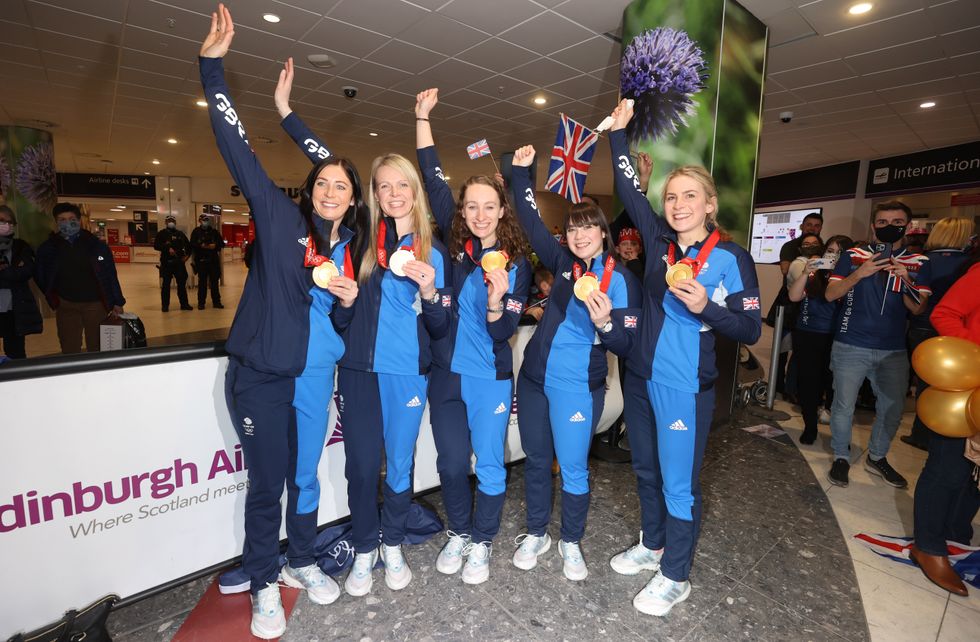 Team GB’s only Olympic medallists received a hero’s welcome after they arrived home to Scotland on Tuesday.

Winter Olympic champion Eve Muirhead and her gold medal-winning teammates arrived back in the capital just days after clinching the top prize in women’s curling when they crushed Japan 10-3.

Speaking at Edinburgh Airport during the final leg of her journey back to Stirling, the 31-year-old said she hoped the victory would leave a lasting legacy just like Rhona Martin’s famous 2002 gold in Salt Lake City.

“For us to repeat that 20 years later is really special and it’s fantastic for the sport of curling,” she said.

The gold winning athlete, who was reunited with her friends and family after not seeing them for more than a month, said the victory was “starting to sink in” after a “wild” few days.

“It’s funny because you are out there in a really tight bubble,” she said.

“We have had our phones off with different numbers and no social media, and when I landed back in London last night I put my phone on and, honestly, it’s not stopped.”

The support extended to the arrival lounge at the airport, with Union-flag clad friends and family cheering their Olympic heroes as they arrived back in Scotland.

Dodds said: “It’s such a great feeling. Obviously they weren’t able to be in Beijing, like a lot of them would have (liked to have) been there, our family especially, so it’s just really special to enjoy that moment all over again.

“It’s almost like getting the gold medal for the first time. And just seeing how proud they were, that was something really special.”

Duff’s parents, Brenda and John Duff, 22-year-old sister Jodie and pilot boyfriend James were among the crowd and on hand to meet her after she finally arrived back north of the border.

John, a long time curler himself, said it the victory had not yet sunk in and Brenda added: “I still can’t quite believe it.”

The 54-year-old, who was in the pub when he saw his daughter secure Olympic gold while away at a curling competition, said: “Because we didn’t see it in the flesh and saw it on the TV it doesn’t feel quite so real. But we’re very, very proud.”

It was her first Winter Olympics, and comes after years of dedication to the sport she loves.

John said: “She was very driven. Very determined. Any setbacks and she would just go again. Always willing to learn, always willing to listen to her coaches and learn how could she improve.”

Surrounded by other curlers keen to see his daughter win Olympic gold, he said: “It was very very emotional at the end. We’re all dads and we’ve all been curling for many years together.”

James, 26, said while watching the final was stressful the semi-final was worse, and added: “When me and Hailey first met this was her dream. To see her achieve it is very nice.”

And curling success did not stop there.

The sport secured Team GB’s only other medal of the games, with the men’s team bringing home silver after Sweden triumphed 5-4 in the final – meaning Britain’s 98-year wait for a men’s curling gold continues.

Men’s captain Bruce Mouat, 27, from Edinburgh, said the team “didn’t really realise how big (the reaction) was until we got back home”.

But that wasn’t the only thing he learnt when he got home. “My brother actually had his first child yesterday so it’s been a bit of a whirlwind so definitely going to try catch up with him and the new baby.”

He arrived back in the capital with teammates Grant Hardie, Bobby Lammie, Hammy McMillan and Ross Whyte.