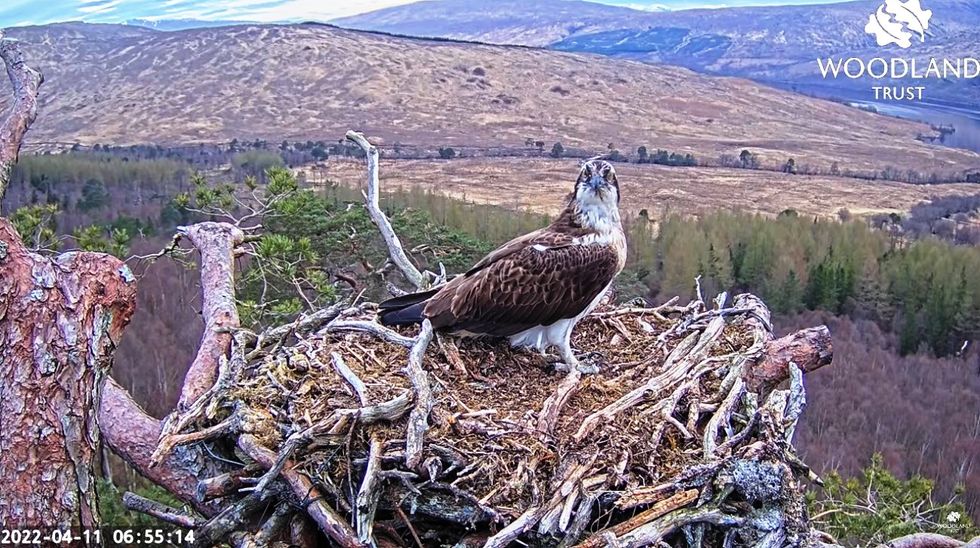 Louis the osprey returned to to Loch Arkaig Pine Forest in Lochaber at 6:49am on Monday (Woodland Trust Scotland/PA)

Lockdown sensation Louis the osprey has returned to Loch Arkaig Pine Forest in Lochaber – settling on a nest with a newly installed camera.

Woodland Trust Scotland has operated a nest camera each summer since 2017, and the footage became a hit during the first pandemic lockdown, clocking up 400,000 views.

But Louis moved to a different nest last year, leaving fans unable to follow his progress, so technicians installed another camera at his most recent home to catch his every move.

It looks like Louis the osprey has arrived at the second nest at #LochArkaig! Tune in to our #OspreyCam and follow… https://t.co/HSflIJad78
— Woodland Trust🌳 (@Woodland Trust🌳) 1649662541

Trust spokesman George Anderson said: “Louis landed on nest two this morning and has been busy excavating and rearranging sticks.

“He seems to have very definitely chosen to go with the nest he used for the first time last year. Fingers are now crossed for the return of his mate, Dorcha.”

Since a camera was first set up in 2017, funded by players of People’s Postcode Lottery, it has gained a substantial fanbase of people following the family life of ospreys Louis and Aila as they raised their six chicks.

We wanted to give ourselves the best odds of seeing a full summer of activity this year, so we fitted a second camera to Louis’ new nest

But in 2021 only Louis returned, and he eventually followed a new female to another nest in the forest. As a result, the original camera nest lay empty for most of the summer.

Mr Anderson said: “Louis and his new mate Dorcha raised two chicks, so it was a successful year for the ospreys, but a disappointing one for their internet fans.

“We wanted to give ourselves the best odds of seeing a full summer of activity this year, so we fitted a second camera to Louis’ new nest.

“It’s a few kilometres away from his original tree. Depending on osprey activity, we may revert to follow just one of the nests as the season progresses, but if we are lucky and both nests are occupied, we will keep streaming from both.”

In the hours after his return to the nest, Louis’ mate Dorcha also returned to her Loch Arkaig home.

The Trust says that Louis gifted his other half a fish upon her return.

Installing just one camera in the forest is a technical challenge, with no visitor centre nearby with wi-fi and electricity to plug into.

All of the camera kits are powered by solar panels and a signal is beamed across the loch before it enters the Locheilnet system and goes out across the world.

Please log in or register to upvote this article
AnimalsScotland

The Seinfeld AI has become self-aware

OnlyFans took 'measures' to stop Andrew Tate in his tracks