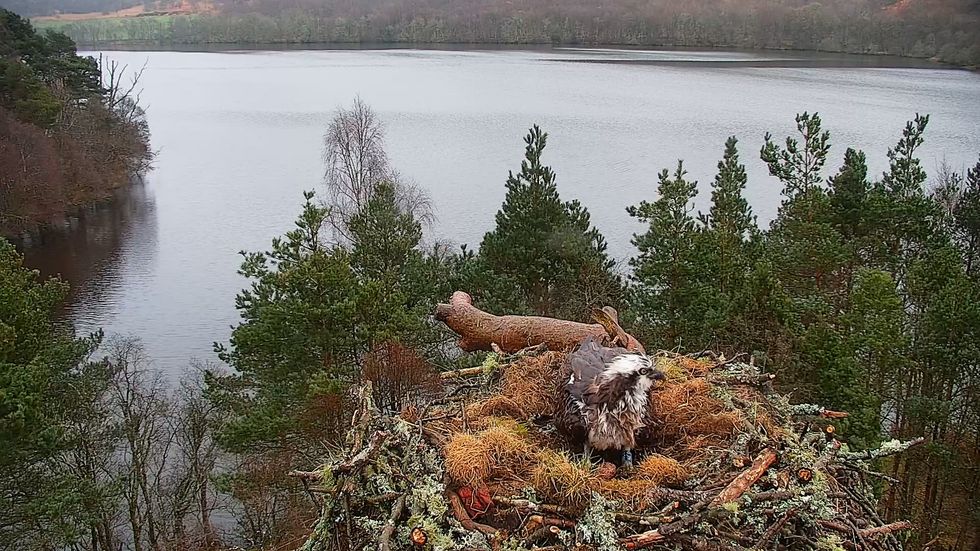 An osprey has laid her first egg of the season after returning to her nest at a nature reserve last month.

The bird, known as NC0, was reunited with her mate, the male osprey LM12, when she returning to the Scottish Wildlife Trust’s Loch of the Lowes Wildlife Reserve in Perthshire for a third season on March 23.

Views of the nest are being livestreamed on a live webcam and staff, volunteers at the reserve and viewers around the world watched as she revealed her egg at 6.34pm on Tuesday April 12.

NC0 is expected to lay more eggs in the coming days and she could be sitting on a full clutch of three eggs by Easter Monday.

The trust’s Perthshire ranger Sara Rasmussen said: “We are thrilled to see NC0 lay her first egg of the season and we’re hoping to see her lay again in the next few days.

“This is a critical point in the season when an osprey pair’s teamwork becomes really important.

“If the eggs are left uncovered they can cool quickly, reducing the chances of successful hatching.

“NC0 incubates the eggs for around 80% of the time but her mate LM12 will take over for brief periods to give her a chance to feed on the fish that he brings to the nest.”

Osprey lay their eggs around one to three days apart, and to successfully hatch these eggs need to be incubated around the clock for five to six weeks.

NC0 first bred with LM12 in 2020 and the pair have successfully raised three chicks.

Ospreys were extinct in Britain for much of the 20th Century but began to recover in the 1960s and an estimated 300 pairs of ospreys now breed in the UK each summer.

Most of these birds migrate to West Africa but some spend the winter in Spain and Portugal.

The Osprey Protection Programme at Loch of the Lowes Visitor Centre & Wildlife Reserve is supported by players of People’s Postcode Lottery.

“We’ll be glued to the reserve’s live webcam and we’re hoping to see tiny osprey chicks hatch out in a few weeks’ time.”

Please log in or register to upvote this article
BirdsOspreyPerthshire