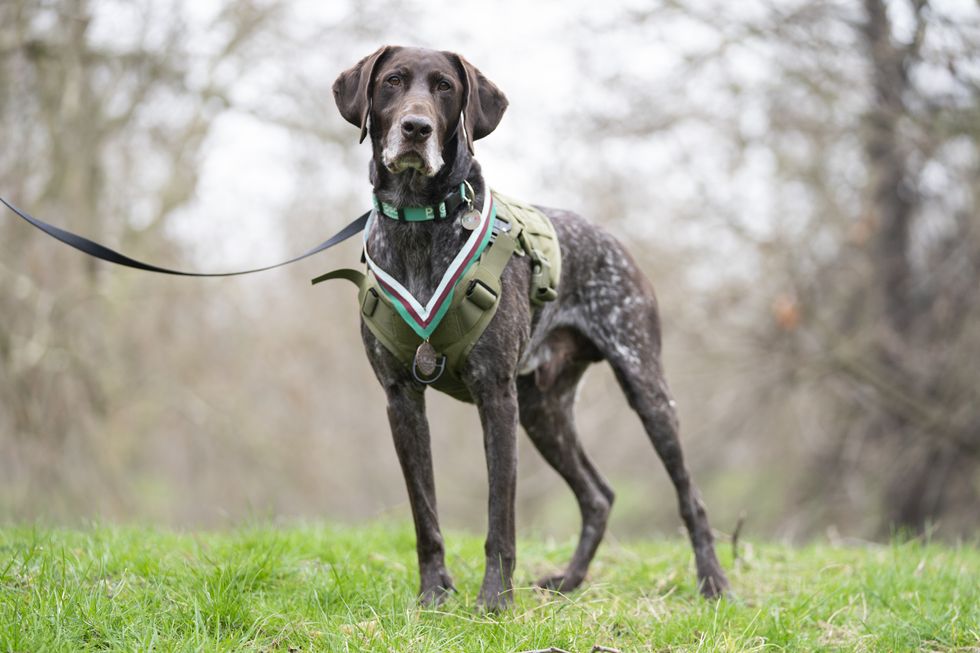 A pioneering RAF sniffer dog has been recognised for his work in Afghanistan with the animal equivalent of the Victoria Cross.

Hertz, a German shorthaired pointer, was the first – and so far only – dog in the British military to be trained to sniff out “personal electronic devices”, including mobile phones, SIM cards and GPS devices.

Now retired, he was awarded the PDSA Dickin Medal at a ceremony in London on Tuesday – the 74th animal to receive the honour.

Warrant Officer Jonathan Tanner, Hertz’s trainer and handler in Afghanistan, told the PA news agency: “In terms of British military working dogs, he is a one-off.

“He’s very much a unique animal.”

WO Tanner said he and Hertz were assigned to address the issue of mobile devices being used to “pass messages and data and details to people on the outside that might pose a threat to those on the inside of camp”.

He spent around two months training Hertz to sniff out such devices.

“It was a capability that in the British military had never been tried before,” he said.

“It was something that we’d never even considered before.”

The technique turned out to be “very successful”, WO Tanner said, with Hertz going on to find more than 100 items of contraband.

He worked in Camp Bastion and locations throughout Helmand and Kabul over a period of 13 months and is said to have saved many lives.

Hertz, born in Croatia, joined the RAF as a one-year-old puppy and was chosen for the special assignment after demonstrating exceptional skill in drug detecting.

WO Tanner said Hertz was “by far the best” dog he’s worked with, and that the pair became “best friends”.

“There were many times that one of us would be having a bad day not, enjoying ourselves as much as we possibly could, and I would take him away, put him back in his kennel at night and just sit there and have a chat like you do with your mates at the end of the day,” he said.

“He wasn’t very good at giving advice, but he said he certainly listened and I can tell you that he never gave me bad advice.”

PDSA director general Jan McLoughlin said: “Hertz is a truly remarkable animal hero and a trailblazer in his field.

“His exceptional skills undoubtedly protected troops from the ever-evolving advances in digital intelligence.

“His actions changed the course of countless missions, saving the lives of military personnel and civilians.

“For this bravery and devotion to duty, we are honoured to welcome him as the latest recipient of the PDSA Dickin Medal.”

Five dogs honoured for years of service to British public

Please log in or register to upvote this article
PDSA