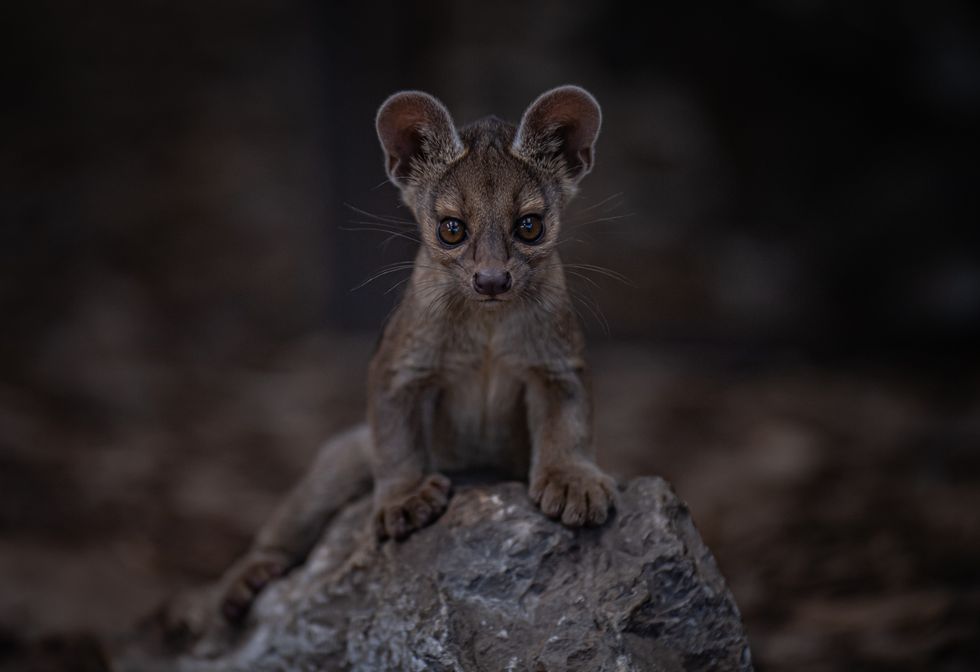 A zoo has shared rare footage of the first fossa pups to be born in its 91-year history.

The 12-week-old triplets were spotted for the first time by keepers as they emerged from their den at Chester Zoo in Cheshire.

The tiny trio, born to the zoo’s five-year-old adult fossas named Shala and Isalo in July, have been identified as one male and two females but zookeepers are yet to decide on names for the youngsters.

Zookeeper Rachael Boatwright said: “While it’s still early days, the three pups are doing great and are now full of confidence as they learn to climb trees and explore together, all under the watchful eye of mum, of course.”

Growing up to six feet long from nose to tail tip, and weighing up to 12kg, the fossa is a catlike creature and is a distant relative of the mongoose.

Their long tails help keep their balance when leaping among tree branches and the species is considered one of the world’s most elusive carnivores, so much so that conservationists have had trouble observing them.

Ms Boatwright said: “The birth of Shala’s triplets is a huge cause for celebration.

“Not only are they the first pups to ever be born at our zoo, but their arrival into the endangered species breeding programme will allow us to discover more about their behaviours – from tiny pups all the way to adults.”

Originating from the island of Madagascar in East Africa, there are only as few as 2,600 remaining fossas in the wild.

Conservationists from Chester Zoo have been helping to protect endangered habitats in Madagascar for more than 10 years.

In 2015, the Malagasy government established The Mangabe New Protected Area, co-managed by the zoo’s field partner Madagasikara Voakajy and the communities that live in the Mangabe region.

The area provides a safe haven for thousands of species living on the island, including the fossa.

Mike Jordan, director of animals and plants, said the zoo’s new additions have given conservationists “hope” amid fears the species could face extinction due to deforestation.

“These three fossa pups are incredibly important to the future of the species and the safety-net population found in conservation zoos like ours, which has become vitally important given the huge amount of deforestation in Madagascar,” Mr Jordan said.

“In the wake of such dramatic devastation on the island, these three little pups give us hope that we can protect this species from being lost altogether.”