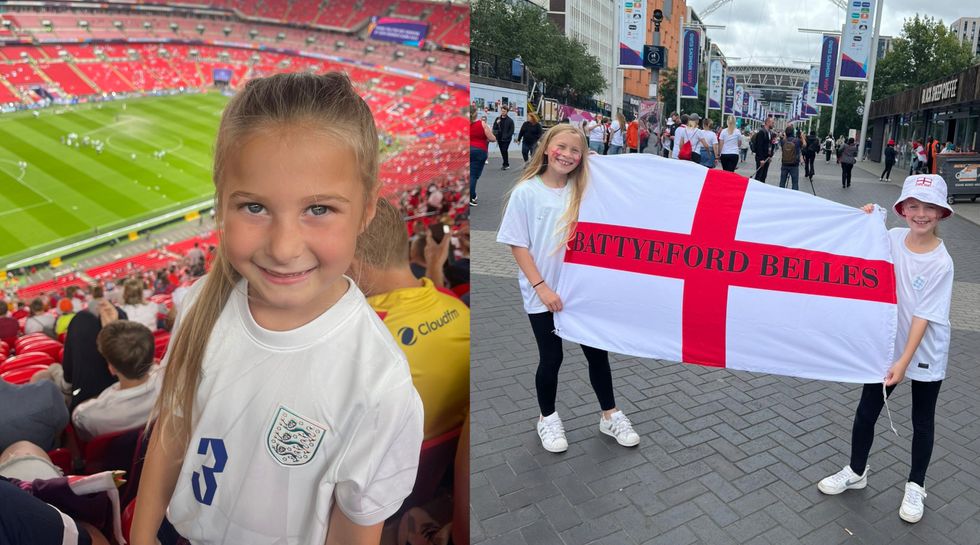 Young fans will get to be “a part of history” as families watch England take on Germany in the Euro 2022 final.

A sea of football fans from across the UK descended on Wembley Stadium on Sunday to show their support for the Lionesses.

Kerry Laville, 42, a trainee teacher, will watching the game from Wembley with her daughters Taylor, 12, and Lauren, nine, her husband Damian, 45, and son Callum, six (Kerry Laville/PA)

Kerry Laville, 42, a trainee teacher, is watching the game from the stands with her daughters Taylor, 12, and Lauren, nine, her husband Damian, 45, and son Callum, six.

Mrs Laville told the PA news agency: “If we win, the atmosphere outside Wembley and on the way home is going to be amazing.

“It’s going to be a great day no matter what but it’s that element of being a part of history, we are very lucky that we’ve got tickets.

“Obviously there is also the big inspiration aspect for the girls, that one day if they try hard enough this could be them.”

Football has played a key role in the household, with Mr and Mrs Laville being avid watchers of football matches before and after their children were born.

Mrs Laville said she hopes the Women’s Euros will “encourage more girls to realise that there are local girls’ teams”.

“Lauren’s actually going to be starting with Leeds United in September, with their emerging talent centre,” she said.

“There is a lot of interest picking up at a grassroots level, which is obviously amazing.

“Women’s football for us is so much more accessible as a family.

“We’re paying for all five of us to go watch a match for what would cost one ticket for a men’s game and, whilst we do enjoy the men’s games, this means we have a lot more chances to go as a family.”

Evie Jackson, eight, has been ‘soaking up the atmosphere’ before the big game after travelling to Wembley from her home in Leigh, near Manchester, with her father, Matt (Matt Jackson/PA)

Meanwhile, eight-year-old Evie Jackson has been “soaking up the atmosphere” before the big game after travelling to Wembley from her home in Leigh, near Manchester, with her father, Matt.

Mr Jackson, 30, appealed on Twitter to find tickets for his “football-mad” daughter but said he had nearly given up hope until a stranger contacted him to offer two tickets free of charge.

The pair travelled to London at 7am on Sunday morning and are looking forward to seeing Evie’s favourite players Mary Earps, Alessia Russo and Ella Toone.

Mr Jackson told PA: “Evie is just soaking up the atmosphere and I think she is surprised at just how many people are here.

“I’ve got my white England shirt and Evie has her orange one on.

“Ella Toone used to play for Evie’s grassroots club and so she gets really excited about seeing her.”

Evie, who is a keen goalkeeper for her local team, added: “I am going to try and cheer the loudest that I can and I will sing Sweet Caroline.”

Six-year-old Harper Mills, who travelled to Wembley with her mother, Lou, said she plans to “do a dance” if the Lionesses are triumphant.

Harper, who is an Aston Villa fan, said she is “super nervous” for the match but is “excited” to watch her favourite player Millie Bright in the final.

The Euros final is expected to draw the biggest home TV audience on record for a women’s football match, with a packed Wembley Stadium and millions more watching around the nation.