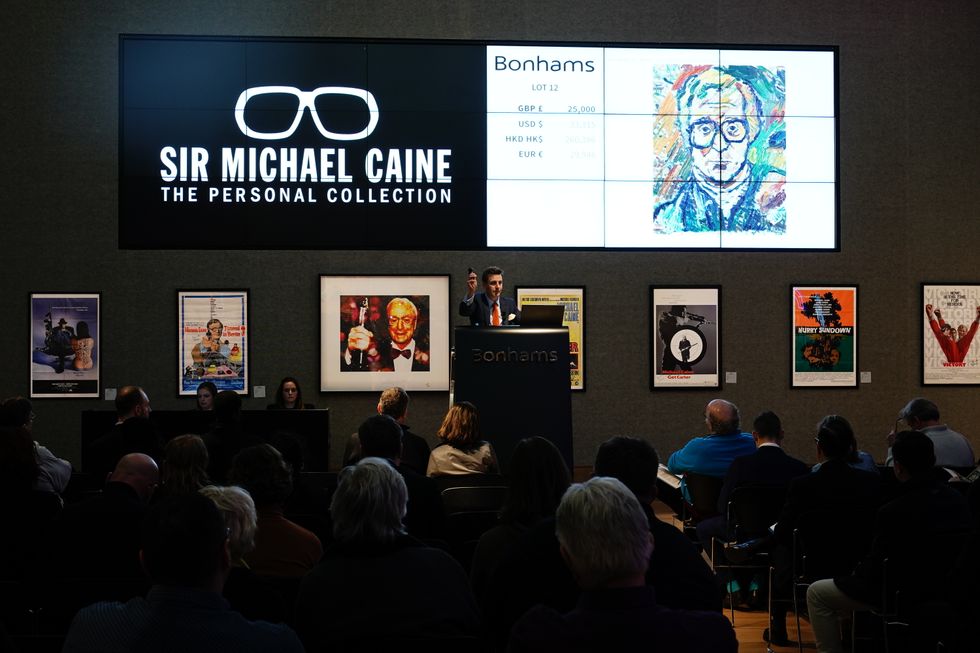 A portrait of Sir Michael Caine by artist John Bratby R.A. sells for £25,000 during the Sir Michael Caine collection sale at Bonhams in London. The sale contains a selection of items reflecting the breadth of Sir Michael’s career, ranging from movie posters, furniture including his desk, works of art and fine art (Aaron Chown/PA)
PA Wire/PA Images - Aaron Chown

An abstract portrait of Sir Michael Caine has fetched £25,000 at auction during a sale of the actor’s personal collection.

The Oscar-winning actor, 88, and his wife Shakira Caine put mementos from his film career as well as artwork, furniture and jewellery up for sale as they are downsizing into a new home.

The 1977 oil painting by John Bratby, which was expected to sell with an upper estimate of £3,000, was among the lots which went under the hammer at Bonhams auction house in London on Wednesday.

A film poster of Zulu, which sold for £11,500, was among the actor’s collection (Aaron Chown/PA)PA Wire/PA Images - Aaron Chown

Also among the collection was Sir Michael’s own Indian rosewood pedestal desk that fetched £10,000, and a poster from one of his early works, the 1964 war film Zulu, which went for £11,500.

A director’s chair from the 1971 crime film Get Carter, in which Sir Michael starred as gangster Jack Carter, had an upper estimate of £1,200 but exceeded this by selling for £5,000.

Other items from his seven-decade screen career featured in the sale included a film poster for 1966 romantic comedy Alfie, which earned him an Oscar nomination for best actor, that sold for £4,000.

Two signed posters also went under the hammer, one being of the 1969 Battle of Britain war film which saw Sir Michael act alongside Laurence Olivier (£4,500) and the other for The Italian Job where he starred as protagonist Charlie Croker (£8,500).

A number of black and white photographic prints featuring Sir Michael throughout the years, as well as two pairs of spectacles belonging to the veteran actor and his Rolex wristwatch were also part of the collection.

Another portrait of Sir Michael by Lincoln Townley went under the hammer for £15,000, with the proceeds of the sale being donated by the actor and his wife to the National Society for the Prevention of Cruelty to Children (NSPCC).

Sir Peter Wanless, chief executive of the charity, previously said: “Sir Michael Caine is a former patron and longstanding supporter of the NSPCC.

“We are touched and extremely grateful he has chosen to donate all the proceeds raised from the sale of this fantastic portrait of him to such an important cause.”

Please log in or register to upvote this article
Bonhams