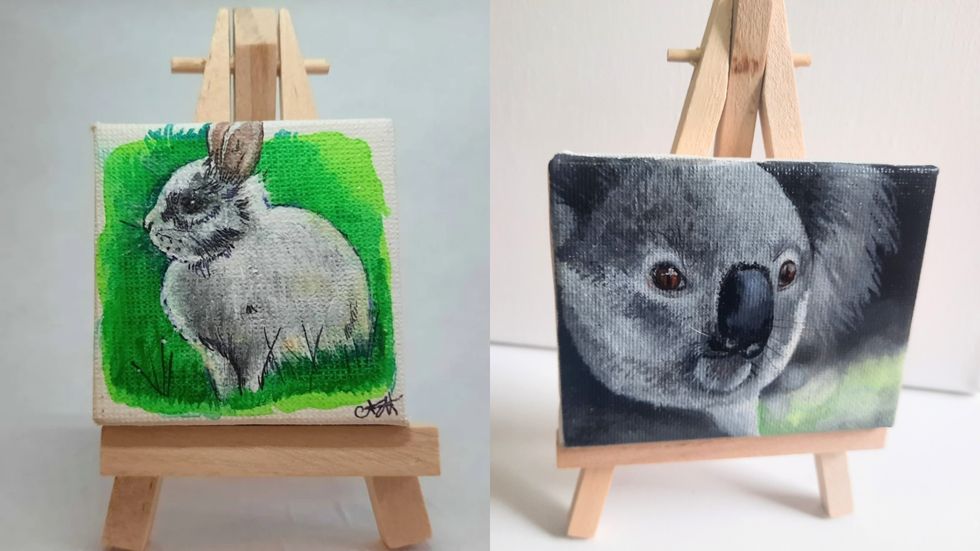 A miniature artist who had not painted in 24 years has said creating five-by-five centimetre portraits is her way “of getting art to everybody”.

Anna Howard, 49, said she is “overwhelmed” by the hundreds of reviews left for her miniature sculptures and portraits that require her to use “tiny, tiny” brushes with just five bristles, and that have gained her over 5,000 followers on Twitter.

She dropped out of Glasgow School of Art at 24, working in catering ever since, and had not picked up a paintbrush in over 20 years when the pandemic hit and she decided to revive her passion for nature-themed artwork – later being persuaded by a friend to sell her illustrations on online marketplace Etsy.

“I can’t believe it, it’s been such a lovely journey,” Ms Howard, who lives with her husband Grant and 13-year-old daughter just outside of Glasgow, told the PA news agency.

“When someone suggested to me, ‘Why don’t you try and sell what you’ve made?’ I thought, ‘Well no-one’s going to be interested.’

“And I got sales almost straight away… I was blown away.”

Ms Howard “accidentally” fell into creating miniatures of animals such as rabbits, mice, and frogs after working with small clay sculptures that required intricate paintwork.

Her love of animals and birds, in particular, spurred her on to take to small-scale projects of woodland creatures, less than two inches in height and width and paired with a tiny easel.

One portrait depicts a curled-up hedgehog with brown and white spikes against a blue background and another, an orange-eyed green frog nestled behind a bright blue plant.

Ms Howard is based near Glasgow (Anna Howard/PA)

She said that selling original art for lower prices on her Etsy shop, Earth and Sand by Anna, is part of the inspiration behind her work.

“I thought, I’m going to try miniatures because not everybody can afford large artworks – not everybody wants things on their wall,” Ms Howard said.

“And not everybody wants to pay a lot of money for that.

“So for me, it’s a way of getting art to everybody.”

Her miniatures, at just five-by-five centimetres, take over an hour and a half because of the detail and “tiny strokes”.

After setting up her shop in April 2021, Ms Howard has sold 199 pieces of work, including wall-hangings and larger portraits, after a 24-year hiatus from art.

“Nearly 200 and (I am) absolutely shocked, but so so delighted,” she said.

“It’s amazing because I literally hadn’t picked up a paintbrush since I was about 24.

“And then I just dropped tools and went on with my life.

“I didn’t even know if I could still do it.”

Ms Howard described the last 17 months as “fabulous” and said her dream is to be able to paint full-time.

“And I’ve really enjoyed that aspect of it, keeping in touch with buyers.

“Sometimes I think, ‘Have they got the wrong person? Is it somebody else they are talking about? Because it can’t be me.’

“But I’ve made so many friends online because of it.”

Ms Howard added that her daughter often helps out with the hobby: “She’s like, ‘I think the paws are too small’ – she helps.”

Please log in or register to upvote this article
AnimalsArtGlasgowUplifting

September is the most popular month to have an affair, study says