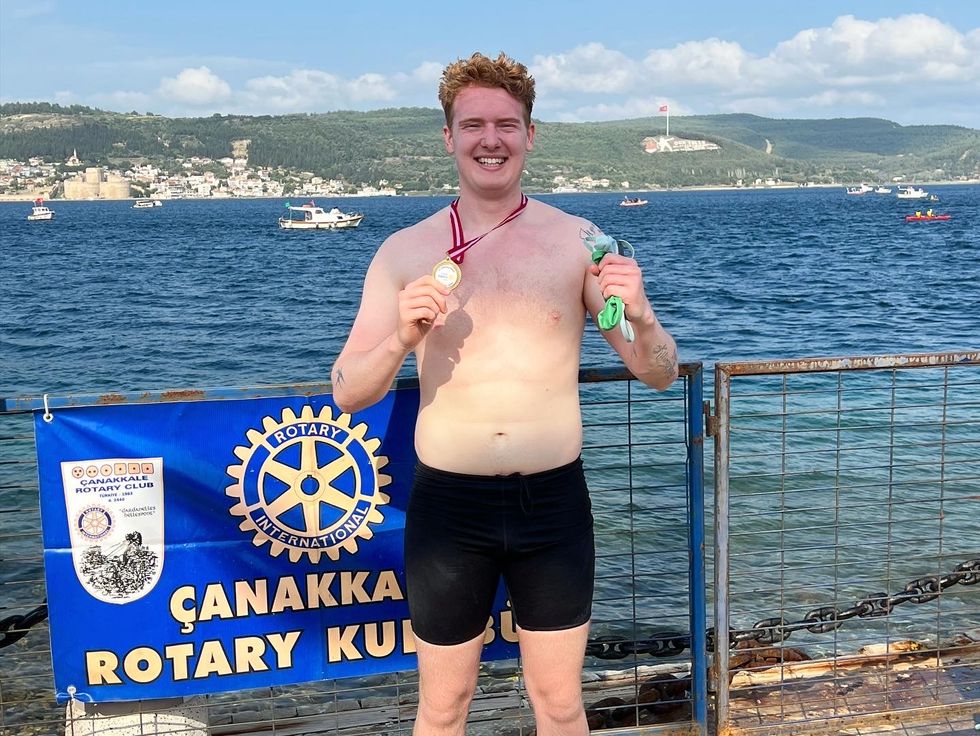 A charity fundraiser has emulated Lord Byron by swimming from Europe to Asia, and beating the poet’s time for the crossing.

Louis Alexander, 22, from London, has dedicated his life to raising money for dementia research after his grandfather died following a 17-year fight against the disease.

Now the multi-sport athlete has taken on what is said to be the oldest swimming challenge in the world, crossing the Hellespont, one of the busiest shipping lanes in the world.

Romantic poet Lord Byron (George Gordon) famously swam the strait, known as the Dardanelles, between the continents in north-west Turkey in 1810 in homage to the Greek classical myth of Hero and Leander.

Louis beat his two-hour goal by finishing the race in one hour and four minutes, faster than Lord Byron did when he completed the challenge.

He told the PA news agency: “I’m over the moon with the time and I beat Lord Byron’s time too, by six minutes.

“The swim was simply incredible. At times it felt like the longest hour of my life, and at others, just peaceful.

“The goal was to honour Lord Byron, and his incredible first. After finishing the swim, my respect has for him has only gone up.

“To complete the swim over 200 years ago with no help from briefings, support boats etc that exist today, is just phenomenal.

“It’s considered by many to be the epitome of ocean swimming because it’s the oldest swim in history.

“What’s even more special is that Lord Byron was 22 years old when he did the swim, which is the same age I was during the swim.”

Louis decided last year to dedicate his life to raising money for charity through such challenges, turning him into a full-time adventurer.

The busy shipping lane was shut for two hours during Turkish Victory Day and to honour the birth of ocean swimming, with athletes from across the world taking part in the four-and-a-half-kilometre (2.8 miles) swim.

Louis signed up to cross the Hellespont before the pandemic.

He said: “I’m so excited I finally got to do it. It’s literally one of the busiest shipping lanes in the world, which is epic, and they close it for just two hours.

“So if you don’t make it over in two hours, the safety boats will come and pick you up, because once those shipping containers and vessels start again, you can’t stop them and you can’t go around them.”

The time limit turned out to be no problem for the Londoner, as he made it across the Hellespont in just over half the allocated time.

Louis has completed three fundraising challenges this year, including running 17 marathons in 17 days.

So far, the adventurer has raised more than £25,000 for Alzheimer’s Research UK, inspired by his grandfather Rick Taylor, from Sheffield.

He said: “I was swimming for them and in honour of my grandfather, who was an adventurer and explorer himself, who sadly lost his life to dementia.

“Grandpa served in the British Army for 38 years and he had been all over the world. He was very much an adventurer and explorer in his own right.”

For the swim, Louis was accompanied by Ben Schrevel, 28, who also lost his grandfather to dementia.

It was their first swimming challenge.

For his next challenge, Louis plans to climb the highest mountain in northern Africa and run from London to Paris.

He said: “At my grandad’s funeral, I promised I would fight for a cure and only stop when we found it.”