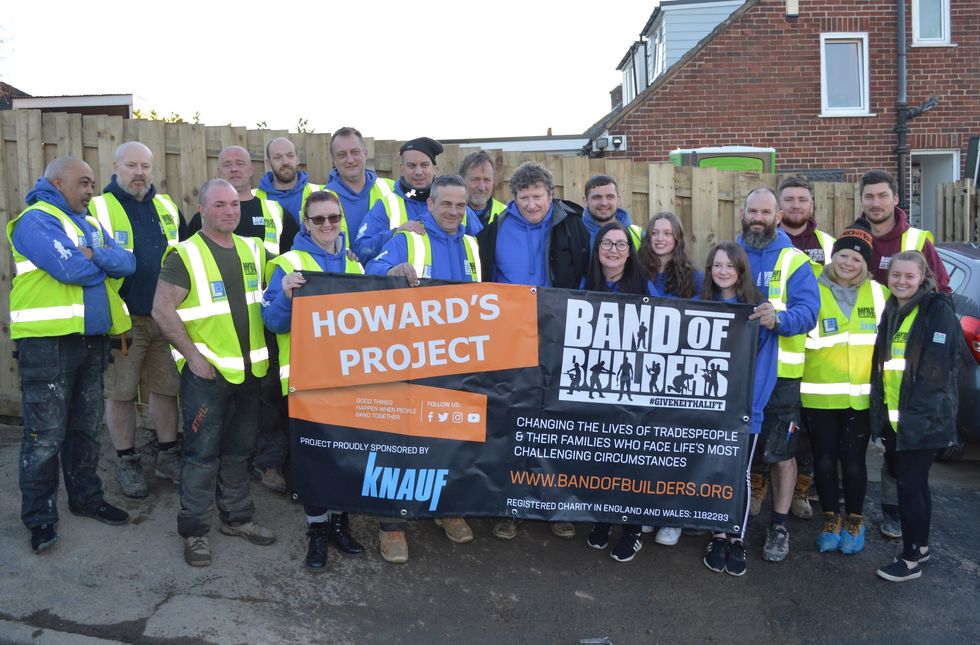 A father-of-two who had a life-changing heart attack during the Covid-19 pandemic has taken the next step on his road to recovery thanks to kind-hearted builders.

Building surveyor Howard Holden, 55, suffered unexplained heart failure in his sleep at his home in Oswaldtwistle, Lancashire, in April 2020.

His terrified wife Sam, 51, and daughters Daisy, 14 and Tilly, 12, performed chest compressions on him until paramedics arrived but he was left with severe brain damage due to a lack of oxygen.

Mr Holden was put into a medically induced coma for two weeks and has since had to relearn everything from walking and talking to eating at a residential brain injury unit in Leeds.

The charity Band of Builders heard of the former plasterer’s plight and wanted to ease his eventual full-term return home by transforming the property to suit his needs.

A team of more than 40 from across the country have spent the past three weeks building an extension, installing a wet room and erecting a new garden fence.

Band of Builders completes practical projects to help members of the UK construction industry who are battling illness or injury.

On Sunday the family had an emotional first look at their renovated home.

Mrs Holden said: “We’re blown away by the work Band of Builders have done to make our home safe for Howard. We’re impatient to get him home and this work gets us one step closer to achieving that.

“Having him there to see the changes that have been made and how much work has gone into helping us from a group of absolute strangers was a moment we’ll never forget. We still can’t believe how many people have done so much to help us, we’re just so grateful.”

Billy Thomasson, volunteer project lead from Band of Builders, said: “From the first visit to Sam and her family, we knew we could make a difference to help her, Howard and their girls.

“We’ve built an extension that provides a bedroom and dedicated wet room for Howard, as well as access to the garden that we’ve fully landscaped so it’s safe for him to access. Changes to the rooms downstairs meant that initially the girls were going to have to share a room upstairs, but we’ve managed to create them a bedroom each by splitting that in two so they have their own space after going through such a difficult time.

“Each of our volunteers, who travelled from across the UK, gave up their time for free and together we hope we’ve made a difference so that Howard and their family can look forward with hope and start to rebuild their lives without the extra stress of worrying about these changes to their home.”

Yes, you can get monkeypox and Covid at the same time

Please log in or register to upvote this article
Covid-19Lancashire