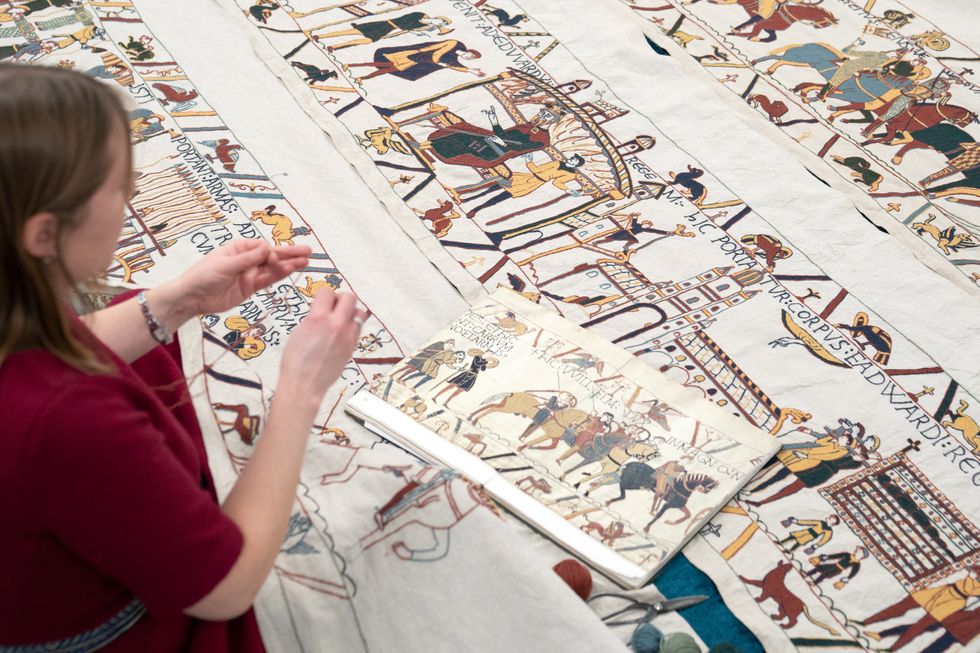 Mia Hansson, 47, of Wisbech, Cambridgeshire, with some of her full-size replica of the Bayeux Tapestry, which she is more than halfway through making. (Joe Giddens/ PA)

A trained primary school teacher said that copying mistakes in the Bayeux Tapestry is going to “turn her hair grey”, almost six years into a project to stitch a full-size replica of the medieval original.

The 47-year-old works on the tapestry “curled up on my sofa” at home in Wisbech, Cambridgeshire, and can spend up to 10 hours per day on it.

The Bayeux Tapestry tells the story of the Norman Conquest in 1066.

“If you go and view the Bayeux Tapestry you’re going to see it as a whole, but I have to dissect every single inch of it to recreate it, to draw it correctly,” said Miss Hansson.

Mia Hansson, 47, of Wisbech, Cambridgeshire, with some of her full-size replica of the Bayeux Tapestry, which she is more than halfway through making (Joe Giddens/PA)

“I find all the little details that are wrong that they did wrong from the very start and probably thought ‘doesn’t matter, nobody’s going to notice’.

“That hand that’s turned the wrong way around, one bloke, he’s got two right hands, no-one’s going to notice which side his thumb is – I did.

“They did a job and they did a marvellous job.

“Who am I to correct their work.

“I honour what they’ve done, mistakes and all.

Miss Hansson works on the replica tapestry while curled up on her sofa, and can spend up to 10 hours per day on it (Joe Giddens/PA)

“But I’m a trained primary school teacher – correcting mistakes is what I do.

“This is going to turn my hair grey.

“I’m working on a piece now where the back leg of a horse is just simply wrong, there’s everything wrong about it and I have to copy that and it’s doing my head in.

Miss Hansson started work on the replica in July 2016 and had hoped to finish within 10 years.

She said she fell behind schedule after first buying a puppy and later embarking on a home renovation project, adding: “All going well I’ll come in at 11 years rather than 10.”

The full-time carer for her disabled stepson said that she started sewing aged “four or five”.

“My nan taught me cross stitch basically to keep me quiet and stop being naughty,” she said.

Close up detail of Mia Hansson’s full-size replica of the Bayeux Tapestry in Wisbech, Cambridgeshire, which has so far taken her almost six years to stitch (Joe Giddens/PA)

She started sewing Viking re-enactment clothes in 2001, “you can’t go and buy those clothes in H&M”, and “became quite good at it”, getting orders from “friends and family, museums and schools”.

“Six years ago I didn’t have any orders coming in,” she said.

“I got bored trying to think ‘what can I make next’.

“So I thought I need a project I can’t finish in a hurry.”

Miss Hansson believes her replica will be the first to be made by one individual, rather than a group of people, in Europe (Joe Giddens/PA)

She said she heard of someone making a half-size replica of the Bayeux Tapestry and decided to do a full-size one herself.

“Because what’s the point of doing it half-size?

“If it’s a big project you might as well do all of it.”

She said that a man in Canada had previously made a full-size replica but she believes hers will be the first made by one person in Europe, rather than by a group of people.

Miss Hansson said she may sell the replica once it is completed, adding: “It’s not going to go cheap, obviously.”

She will display the unfinished replica tapestry at St Peter’s Church Hall in Wisbech on April 12.