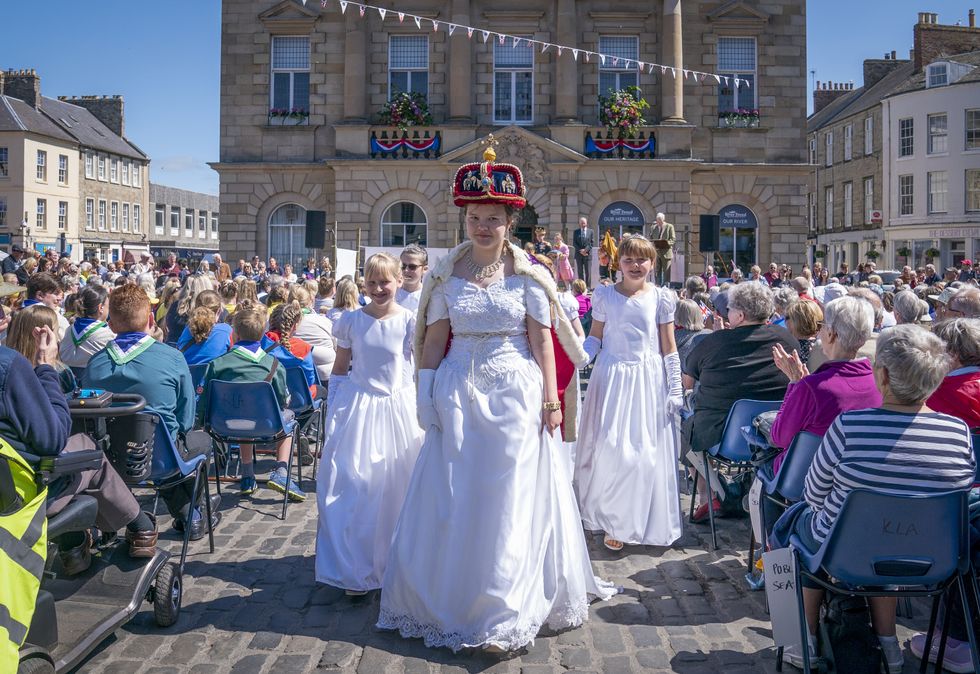 Susannah Ayling, 12, plays the part of The Queen in a re-enactment of the Queen’s coronation performed by a cast from members of the local Cubs, Scouts and Guides in the town square during Platinum Jubilee celebrations in Kelso, on day three of the Platinum Jubilee celebrations for Queen Elizabeth II (Jane Barlow/PA)
PA Wire/PA Images - Jane Barlow

Children in Kelso have commemorated the Platinum Jubilee with a re-enactment of the Queen’s 1952 coronation.

Members of the local Cubs, Scouts and Guides groups recreated the event on Saturday as part of day-three jubilee celebrations in the Scottish Borders town.

Susannah Ayling, 12, took on the role of the Queen.

She was escorted by an entourage of fellow cast members and representatives from local organisations in a parade led by Pipe Major Mark Macrae as they made their way to the town’s square.

The parade was met by crowds and a fanfare, before the ceremonial party took to the stage.

The re-enactment was narrated by Alasdair Hutton, and addresses were delivered by Deputy Lord Lieutenant John Jeffrey.

Festivities continued with entertainment, market stalls and a funfair.

The costumes and props for the re-enactment were all homemade and included an orb which was created from a ballcock which had been sprayed and decorated.

Liz Hird, one of the organisers of the event, said: “It was a wonderful day, we had a tremendous turn out. It was the most beautiful day, the sky was blue and it went really really well.

“I think the children taking part in the re-enactment were nervous at first but I think by the time they had done it and realised the reaction to them they were tremendously proud and they will remember it all their lives.

“And this is what it was all about, it was about getting children involved and all the uniformed organisations, the Cubs and the Scouts and the Brownies and the Guides they were all there, in uniform, flying the flag.

“It was a great memorable thing for them.”

Please log in or register to upvote this article
JubileePlatinum JubileeQueen