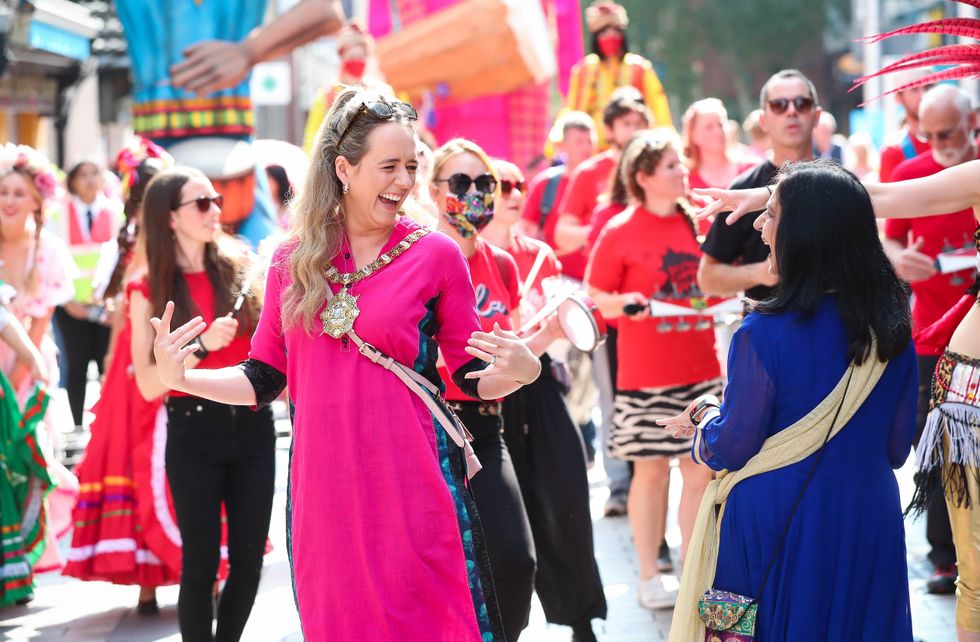 An array of colours and floats filled the streets of Belfast as Northern Ireland’s largest cultural diversity festival took place.

The Mela carnival parade wound its way through the city – bringing music, dance, art, food and celebrations back to the streets.

The Mela carnival marks the start of the festival, which will take place over the next week.

Hundreds of artists from across Northern Ireland took part in the parade, which started at Writer’s Square and made its way to City Hall.

Great to attend the launch of the Belfast Mela with Mayor of Belfast @CllrBlack Mela is our biggest multi cultural… https://t.co/obUeq0Ec7w
— Deirdre Hargey (@Deirdre Hargey) 1659542661

It is the first time the festival has taken place following a two-year break due to the Covid pandemic.

The carnival will be followed by daily Mela plus events across the city next week, leading up to the annual Mela Day extravaganza in Botanic Gardens next Sunday.

It was led by the Lord Mayor of Belfast Councillor Christina Black and Belfast Mela founder Nisha Tandon – with pulsating world music and dance and amazing sculptures.

There was also a global village at City Hall with aerial acrobatics displays by Fidget Feet and live global performances on stage, along with food and arts workshops.

The week ahead will include Neil Martin’s Connections Concert at St Anne’s Cathedral on Tuesday, which will feature 14 local musicians from across the globe now living in Northern Ireland.

On Wednesday, there will be a showing of a climate change animation film to celebrate Mela’s green credentials, while on Friday Global Ceili will bring together dancing from Scotland, Ireland, China, Indian and Mexico.

The festival will end with Mela Day at Botanic Gardens next Sunday.

Thousands of visitors are expected to visit Botanic Gardens from 12 noon to 6pm for the big Mela finale,

Ms Tandon, OBE, founder of Belfast Mela and director of ArtsEkta said: “We are delighted to be back with our first full festival since the pandemic and our most ambitious programme to date including the long-awaited return to Botanic Gardens for our festival finale.

“From outdoor spectacles, late night music, pop up food events and walking tours, to exhibitions, wellbeing days, film screenings and theatre there is really something for everyone in what is now the biggest celebration of cultural diversity on the island of Ireland.

“We are so proud to have been working with hundreds of artists, thousands of participants and are looking forward to welcoming up to 60,000 attendees to events over eight days.”

Sheffield tries to sell itself as the perfect Eurovision host