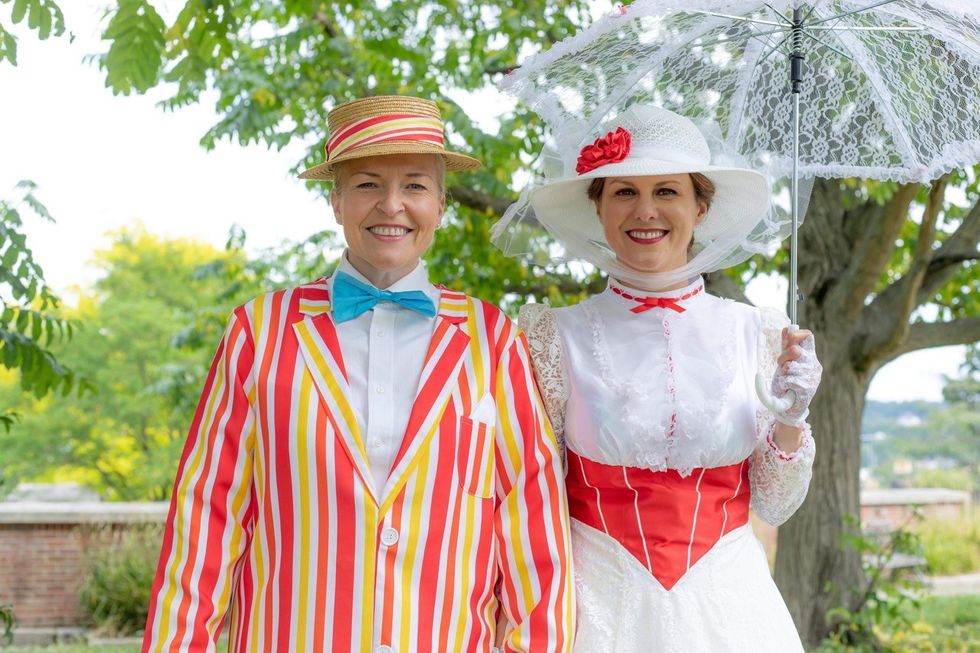 A couple have tied the knot in a Mary Poppins-themed wedding ceremony, as it is a favourite film of one of the pair.

Wheat scientist Emilie Knight, 43, dressed as the fictional nanny while 51-year-old ambulance care assistant Kerrie Smith became Bert in a striped jacket and hat when they got married in Norwich.

They walked into the registry office to Jolly Holiday, their guests serenaded them with Let’s Go Fly A Kite while waving paper kites, and the couple departed to Supercalifragilisticexpialidocious.

Among their props was an inflatable carousel horse, and the cake was adorned with two little penguins with umbrellas.

They had planned a simple ceremony with two witnesses but opted for a larger celebration when they realised it meant they could secure an earlier date.

Emilie Knight said: “I have always been a huge fan of Mary Poppins ever since I was little and when I became an adult we loved fancy dress anyway.

“We weren’t going to have a big celebration at the registry office initially, we were going to have just us two and two witnesses – they call it an early bird ceremony.

“But they couldn’t fit us in in June for that because there’s such a backlog of ceremonies because of the last couple of years.

“So then they said: ‘You can still get married that week in June but you’d have to have a bigger thing in the castle with up to 50 guests.’

“So we thought, well if we go for that then we might as well make something of it, and Kerrie suggested I could wear my Mary Poppins dress.

“I thought well, it is a white dress, and any excuse to dress up would be lovely.”

She said there were “a lot of smiles, even in the street” and they were applauded as they walked to a restaurant afterwards.

She added that the registrar said, after seeing them in fancy dress: “The song choices completely make sense now.”

Kerrie Smith said: “We wanted it to be fun, we wanted everyone to have a giggle with us.

“It was just an altogether brilliant day.

The Spixworth couple are planning to go on their honeymoon next year to the Maldives.

Divorce gets nasty when couple can't decide who gets their dog

Please log in or register to upvote this article
Mary Poppins