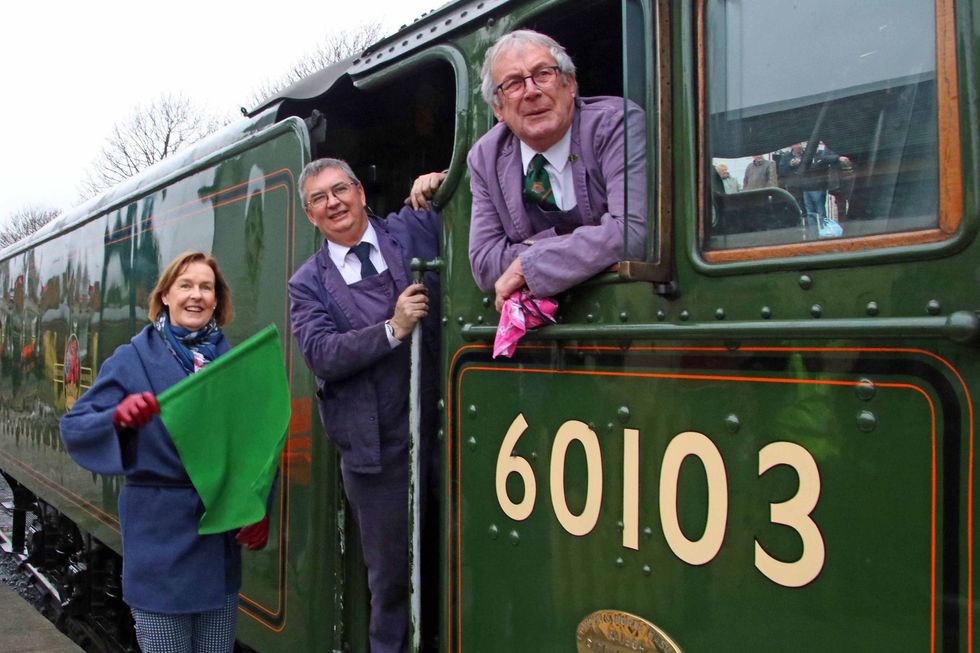 Daughter of man who saved the Flying Scotsman from scrap to visit the UK. Pictured with Swanage Railway volunteers.

The daughter of the man who saved the record-breaking Flying Scotsman from being cut up for scrap is to make a pilgrimage to the UK from her home in Portugal, to ride behind the world’s most famous steam locomotive.

The 97-tonne locomotive, owned by the National Railway Museum in York, will be hauling trains on the Swanage Railway in Dorset later this month.

Penny Pegler will be visiting the railway on Saturday October 22, to ride behind the steam locomotive that her late father, Alan Pegler, purchased from British Railways in 1963 for £3,000 with the political support of then-prime minister Harold Wilson.

Flying Scotsman was a very important part of my life as a child.

Penny will be riding in a special Pullman-style observation carriage that Swanage Railway volunteers have restored after they rescued it in 2007 from San Francisco in the United States, where it was a static bar.

Penny Pegler said: “Flying Scotsman was a very important part of my life as a child. I was nine years old when my father came up up to my room on a snowy night in January 1963 to say goodnight, and told me, with a twinkle in his eye, that he had just bought a beautiful steam locomotive to save her from being cut up in a scrapyard.

“Over the next few years, my father and I went on many wonderful trips all over the UK with ‘Scotty’, as we called Flying Scotsman.

“For me, she was lovely and a special part of my family life. On many occasions, I followed my father through Flying Scotsman’s corridor tender and sat in the fireman’s seat for a short while. There is nothing quite like it.

“My father had a passion for Flying Scotsman, ever since he saw her as a four-year-old boy in London, and wanted to keep her running and not to be just a static exhibit.

“He wanted to keep her alive for future generations to enjoy and today she is everybody’s locomotive with everyone having their own special memory of Flying Scotsman. My father would be so happy to see that.”

During a test run in 1934, the Nigel Gresley-designed Flying Scotsman was the first steam locomotive in the United Kingdom to haul a train at 100 miles an hour.

The Swanage Railway Company’s volunteer chairman, Robert Patterson, said: “We’re delighted that Penny Pegler will be visiting the Swanage Railway to ride behind the world’s most famous steam locomotive that her father saved from the scrapyard.

“It will be a wonderful and very special occasion to see Penny riding in the carriage that she rode in, as an excited teenager, across the United States in the late 1960s and early 1970s while being hauled by Flying Scotsman on a British exports publicity tour.”

Flying Scotsman will be hauling trains on the Swanage Railway for five days from October 22 and will be on static display for a few days beforehand and afterwards.

Please log in or register to upvote this article
Flying Scotsman