Roofer ‘over the moon’ after medieval cross sells at auction for £12,400 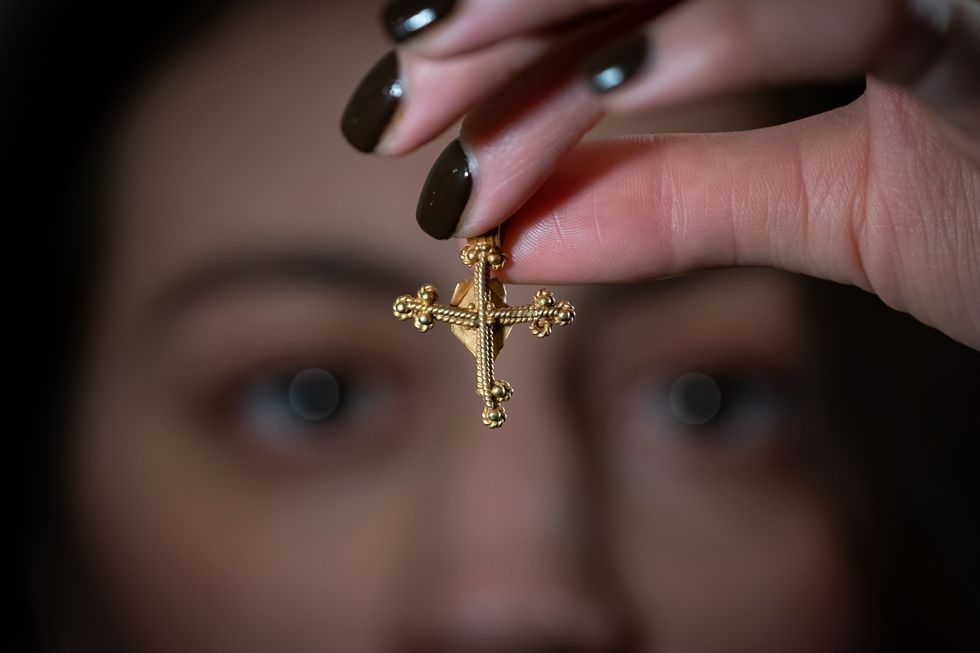 A 12th century cross, which sold at auction for £12,400, is held by a Dix Noonan Webb employee ahead of the auction (Aaron Chown/ PA)
PA Wire/PA Images - Aaron Chown

A gold cross found by a roofer in a muddy field has been sold at auction for £12,400.

Jason Willis, 38, from Norwich, found the medieval pendant, which dates from the 11th or 12th Century, a few inches into the ground at Sutton St Edmund in Lincolnshire in April 2019.

The father-of-three, who enjoys metal detecting with eight of his friends each Sunday, previously said: “My friends and I have had some good finds over the years, but when I came upon the cross and washed it off, I knew it was something special and by the shining yellow-colour, I knew it was gold.

“I handed it in to our local Finds Liaison Officer and after two years, going through the Treasure process, the cross was returned to me and I was told that I could now sell it.”

I am over the moon and as I have just moved house, the money will go towards new items for the house

The item, now known as the Throckenholt Cross and measuring 31mm in length, was sold at auction on Tuesday by Dix Noonan Webb in Mayfair in London.

Mr Willis said afterwards: “I am a roofer and I was working today, so I watched the sale over my phone while sat on a roof.

“I am over the moon and as I have just moved house, the money will go towards new items for the house.”

Frances Noble, head of the jewellery department and associate director at Dix Noonan Webb, described the pendant as of a “form associated with Medieval Greek Orthodoxy in the Eastern Baltic region” and said that a “very similar example was discovered in Denmark”.

Ms Noble said: “In the medieval period, Denmark formed part of the Hanseatic League, a commercial and defensive alliance of merchant guilds and market towns in central and northern Europe, growing from a few north German towns in the late 12th century, to over 200 towns at the height of its powers between the 13th and 15th centuries.

“At its peak, the Hanseatic League had a virtual monopoly over maritime trade in the North and Baltic seas.

“King’s Lynn, on the North Norfolk coast, just 20 miles from Sutton St Edmund, was a significant trading partner for the Hanseatic League, and this trade link may provide a possible explanation for these two very similar cross pendants”.

Nigel Mills, consultant (artefacts and antiquities) at Dix Noonan Webb, said the cross could have been linked to a hermitage and chapel, which survived until at least 1540, at Throckenholt in the parish of Sutton St Edmund.

How many of our 2022 predictions came true?

Huge mysterious object uncovered on Florida beach has been identified