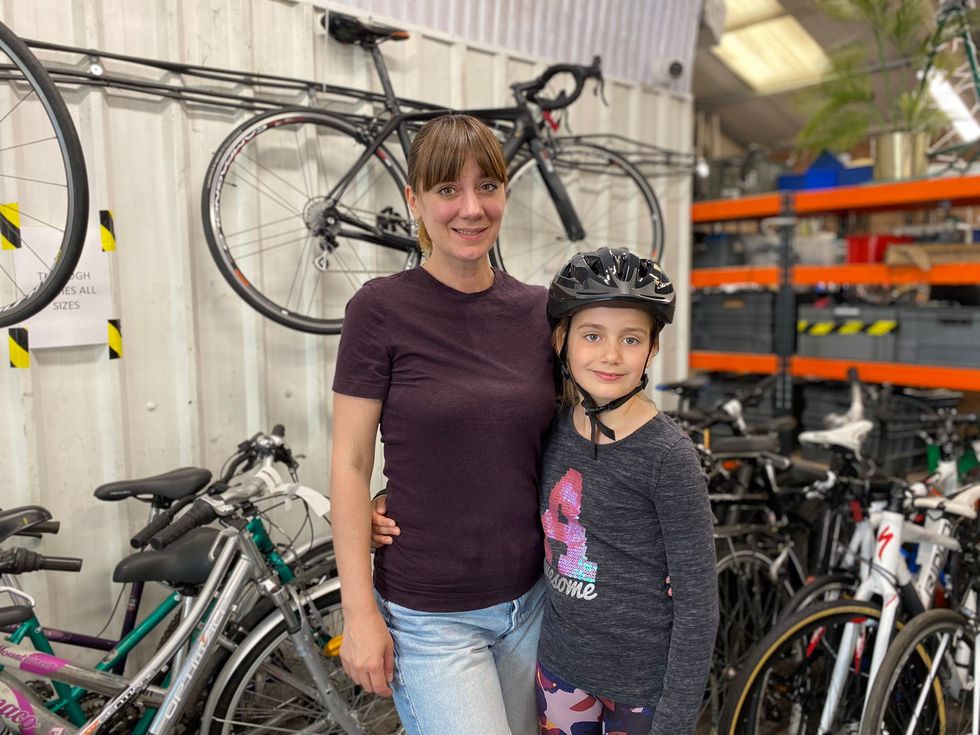 Kateryna Herych, 38, and her eight-year-old daughter Daniella Googe have both received a bike from the charity (PA)

Ukrainian refugees have said they have experienced “a taste of our previous life” because of a charity which gives refurbished second-hand bikes to those who have been displaced.

Charity The Bike Project, which was set up in 2013, takes second-hand or abandoned bikes, mends them and provides them to refugees and asylum seekers living in London and Birmingham.

Kateryna Herych, 38, fled Kyiv, Ukraine on April 26 with her eight-year-old daughter Daniella Googe and said The Bike Project has given them the chance to “have a taste of our previous life”.

“We cycled every weekend just for fun (in Ukraine) and I usually used a bike to commute to my job so when we came here we missed that time and The Bike Project gave us the opportunity to have a taste of our previous life,” Ms Herych told the PA news agency.

The pair have used their bikes to explore new places in London, with a trip to Richmond Park to see deer being cited as a highlight of their visits.

Viktoriia Korneiuk, 27, a lawyer who came to London a month ago from Ukraine, was excited to receive an orange bike from the charity, which bore a striking resemblance to a bike her mother once owned.

“I remember my mum had almost the same one – an orange bike – and when I was a child she taught me how to ride a bicycle with a similar one,” she said.

“So I have feelings and emotions for this bike. It is not just transport for me, it is almost like a friend for me.”

She added that the project is a “significantly important initiative” because it allows refugees to “integrate into society”.

“Having your bicycle you can go somewhere, you can discover the territory around without spending too much money or thinking I cannot afford this. You can meet new friends, you can see new parks,” she said.

Jem Stein, the founder and chief executive of The Bike Project, said the idea for the project began while he was at university, where he joined a befriending scheme for unaccompanied asylum seekers and met a 16-year-old called Adam who fled Darfur in Sudan.

“He applied for asylum and was given just £39 a week to live off and wasn’t allowed to work. Now, one of the big challenges of living in London is the cost of public transport … and one of the first things I did to help Adam settle in was get him a bike,” he said.

He added: “The (Bike Project’s) mission is simple – to get refugees cycling.

“Here in our workshop (is) where the magic happens. We collect old bikes, refurbish them and then people come and collect them.”

This year the charity is set to have provided 10,000 bikes to refugees.

Katherine Potsides, the events manager at Herne Hill velodrome, which has been a donation centre for The Bike Project for over a year, said: “Giving refugee families access to a working bike is a really important way of getting people settled into their lives here, settled into new jobs and we think it’s a fantastic and fun and healthy and sustainable way to get around the town.”

To find out more about The Bike Project and how to donate a bike visit https://thebikeproject.co.uk/

Please log in or register to upvote this article
BirminghamcharityLondonPA ReadyrefugeesUkraine