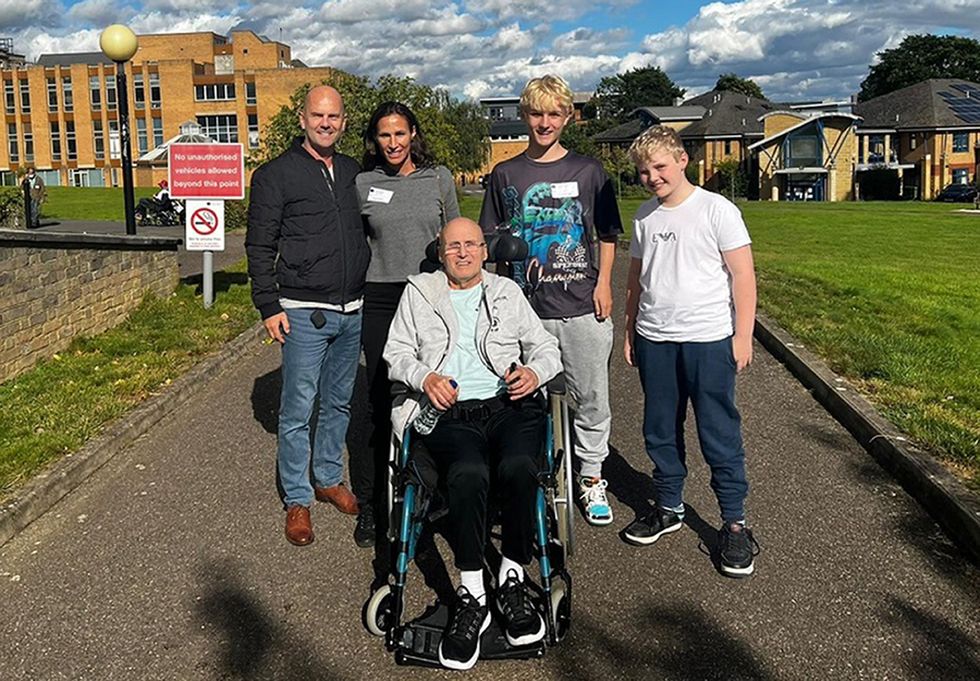 A woman is to take on the London Marathon for a second time, on behalf of a charity that she used to give gifts to every Christmas as a child thanks to her “strong” father.

Nadine Brower, 45, from Tring, Hertfordshire, first took on the London Marathon last year to raise money for the Royal Hospital for Neuro-Disability, in Putney south-west London, which helped her father Eddie Brower, 74, overcome Covid-19. He was placed in an induced coma in January 2021.

She was also inspired by her father, who works part time as a sales manager at confectionary company Joypots, this year, deciding to raise funds for Barnardo’s after frequently visiting the charity as a child because of him.

“We were very young when we first visited, I think I was five or six,” the director at construction company Kinetics Contracts Ltd told the PA news agency.

“Dad was very good like that – he made us realise that there are other kids that are really needy and how lucky we are just to be happy and healthy and it was very special.”

She recalled visiting the charity’s main site in Barkingside, Redbridge every Christmas between the ages of five and 11 as it was “right on our doorstep”.

She added that despite not being able to meet the children she was helping, she was “really pleased” when she received a letter of acknowledgment one day.

“That was really sweet. I remember receiving that letter in the post that the children got our gifts and were really happy,” she said.

Both Ms Brower and her partner Daryl Hewlett, 56 continue to support Barnardo’s each year.

Mr Hewlett has another connection to the charity as he lost a friend to lung cancer on September 4 2021. Mark Foley had spent time at Barnardo’s in his younger years.

“I’m running for him because he recently passed away and he came out of Barnardo’s and was just very thankful that he had them to guide him and bring him up as he had no one,” Ms Brower said.

She added that her partner was “extremely sad” when Mr Foley passed away and read the eulogy at his funeral on September 23 2021.

“At his funeral, the family asked for no gifts or flowers but if anyone wanted to donate to Barnardo’s,” she said.

Ms Brower added that her dad has “massively improved” since last year, when he suffered a collapsed lung and had to be put into an induced coma for three months from January 20 2021.

“He’s doing well –  it’s just very gradual because he had muscle loss and everything that goes along with laying in bed for months on end,” she said.

“He is in a wheelchair and still trying to walk, but he’s a very strong man, he’s getting there – he’s keeping up his training and physio every day.”

She added that her dad is “really proud of me”.

“He said that he’s done nothing. He doesn’t really understand how much he’s gone though to be honest,” she said.

“We watched him get put into a coma and not recognise his wife (Hazel, 75) at first. That was actually the worst time we’ve all been through as a family.

“The whole family has worked as a team, especially my sister Daliah, 47, who did a lot of the chasing up with the hospital appointments and my dad’s wife – it’s not just me. Me running is my way of raising awareness.”

Ms Brower hopes to improve on her time from the last marathon, which was five hours and six minutes.

“This year, I’m hoping to get it in four and a half hours, hopefully less, but that time would be amazing,” she said.

She has trained for three months with the help of the health spa Champneys and has said she has been “enjoying the runs”, even though she said “never again” after the last marathon.

“I could feel my body swell up – luckily I had no injuries,” she said.

However, after seeing her partner and children and having a “nice bath”, she “felt amazing” and registered for the 2022 Marathon, which is on October 2, the next day.

As the day of the famous London event gets closer, Ms Brower said she is looking forward to seeing the public come out on the day to support her and the other runners.

“It’s incredible and so lovely and I am so thankful when people donate,” she said.

“When people leave messages on my fundraising page I always reply because on the day of the marathon they help to create an incredible atmosphere.

“It really helps you along when you’re struggling as well – it gives you their energy to push through to the finishing line.”

The link to Ms Brower’s fundraising page can be accessed via this link: https://tcslondonmarathon.enthuse.com/pf/nadine-brower-d4b54

Please log in or register to upvote this article
charityFundraiserHertfordshireLondonLondon MarathonRunning