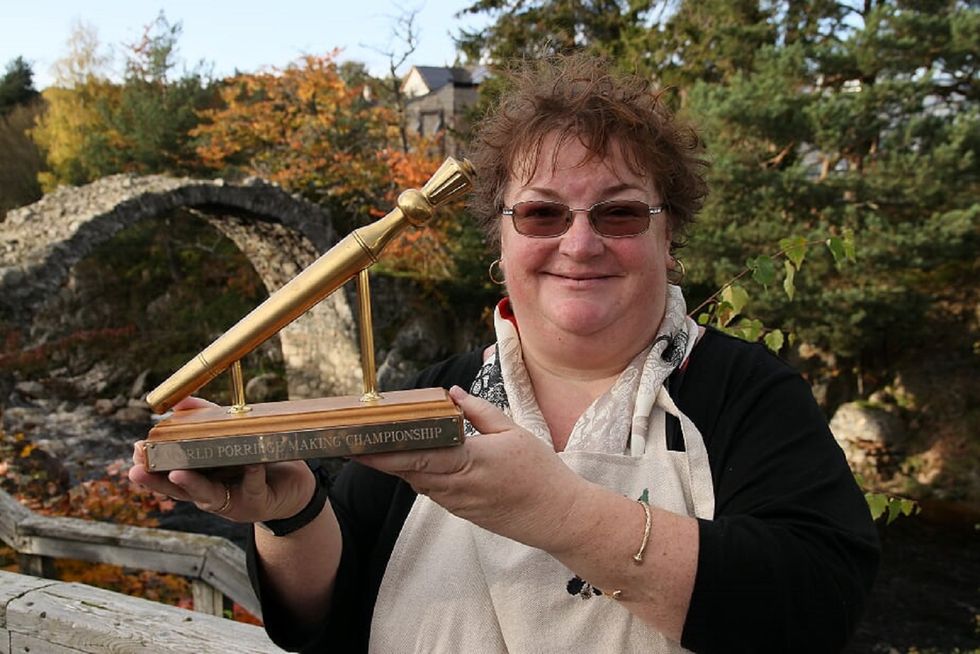 A woman who runs a cafe has proved that she knows how to make porridge taste “just right” after claiming her second victory in the World Porridge Making Championship.

Lisa Williams, who runs Stennetts Community Cafe in Trimley St Mary in Suffolk, took home the coveted Golden Spurtle Trophy for her take on the traditional breakfast dish, after a contest on Saturday in Carrbridge in the Scottish Highlands.

No stranger to proving her porridge making credentials, Ms Williams also took home the trophy in 2019.

“I can’t put into words how delighted I am,” she said.

“I came to Carrbridge thinking that I was saying goodbye to the Golden Spurtle trophy, and I can’t believe that I am taking it home with me again.

“It has been so lovely being back in the village seeing everyone.

“There’s great camaraderie amongst the competitors, and the whole event is so friendly and welcoming.”

What started very much as a small local event has grown to be a highlight of Scotland’s food and drink calendar, and it has been fantastic being able to welcome back visitors from around the world again.

All 26 competitors needed to make traditional porridge using just three ingredients – oatmeal, water and salt – with judges scrutinising everything from texture to colour and taste.

For those who wanted to be more creative with oats, the title of Speciality Porridge Champion was awarded to the competitor who made the best sweet or savoury dish which combines oatmeal with any other ingredients of their choosing.

Highlights for that category include curry porridge with naan and chicken on it; a coconut, chia seed and turmeric rendition of the popular Scottish dish; and even oats mixed with edible insects.

However, these creations were no match for the winning entry by Chris Young, owner of street food and events caterer The Rolling Stove.

He made porridge noodles in two ways, with hand-dived seared scallops and caramelised flags.

Karen Henderson, the main organiser of the competition, said: “It has been wonderful to have porridge fans, their supporters and so many visitors in a very packed Carrbridge village hall for today’s competition.

“What started very much as a small local event has grown to be a highlight of Scotland’s food and drink calendar, and it has been fantastic being able to welcome back visitors from around the world again.”

The contest, which is in its 29th year, was held in person for the first time in three years, having taken place virtually in 2020 and 2021 because of the Covid pandemic.

Alan Meikle, director of sponsors at Hamlyns of Scotland, added “we have loved seeing everyone’s passion for porridge, and the versatility of oats at this year’s championships”.

Please log in or register to upvote this article
HighlandsScotland