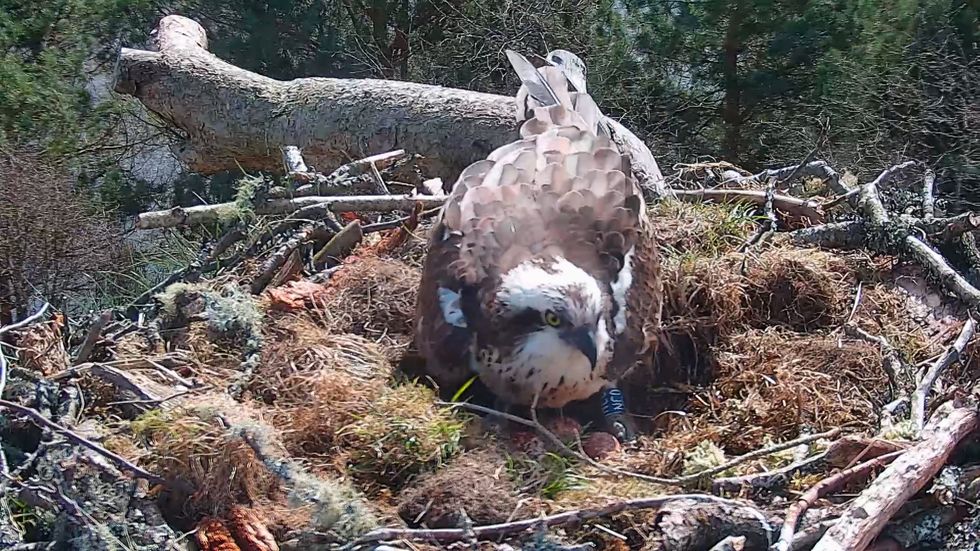 A female osprey has laid a full clutch of eggs at a Scottish wildlife reserve as the species continues its recovery from extinction in the UK.

NC0 laid her third egg at its Loch of the Lowes Visitor Centre and Wildlife Reserve, just hours after her mate LM12 was forced to defend his territory, the Scottish Wildlife Trust revealed at 12.14pm on Easter Monday.

This is a critical time in the season. These eggs need to be kept warm to ensure the survival of the chicks

The third egg was laid after a thrilling morning for osprey watchers, with a male and female osprey intruding on their nest.

The female landed on the nest twice, and visitors to the reserve witnessed spectacular chases as resident male osprey LM12 defended his territory.

Ms Rasmussen said: “This is a critical time in the season. These eggs need to be kept warm to ensure the survival of the chicks.

“We will see NC0 incubating her eggs almost constantly, except for brief periods when she takes a break to eat the fish that LM12 brings her.”

Osprey eggs are incubated for five to six weeks until they hatch, with each egg hatching around one to two days apart in the order they were laid.

For much of the 20th century ospreys were extinct from Britain, until they began to recover in the 1960s.

Around 300 pairs of ospreys now breed in the UK each summer. Most migrate to west Africa, though some spend their winter in Spain and Portugal.

Historically, ospreys were killed because they were seen as a threat to fish stocks used for food and were considered vermin because they ate trout and salmon.

After a slow start, there has been a steady increase in breeding success in the UK, from two pairs in 1967, 150 pairs in 2000, and around double that today.

Please log in or register to upvote this article
AnimalsOspreyScotland