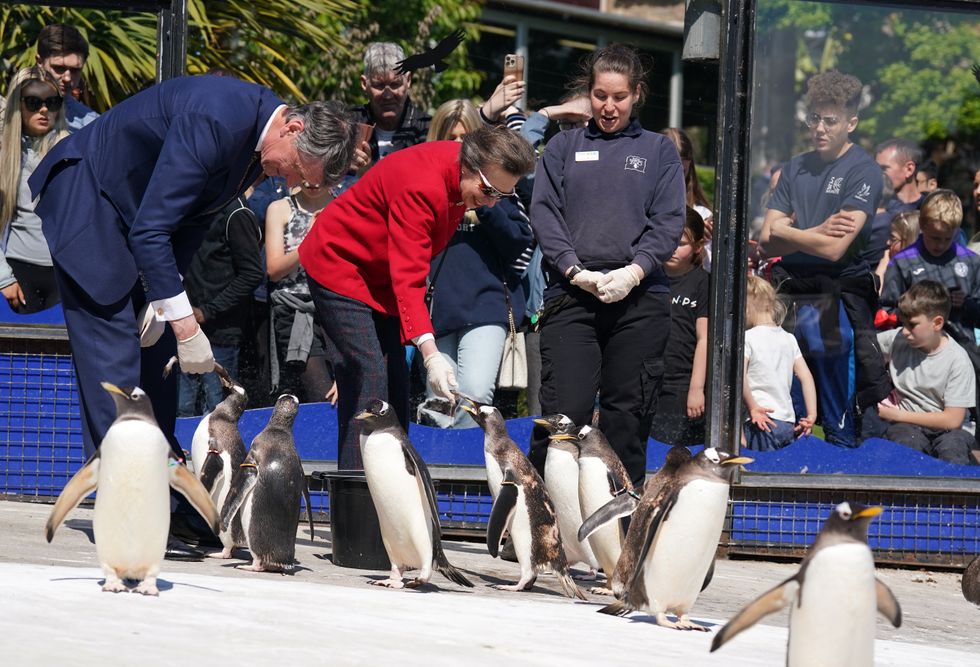 The Princess Royal has fed penguins and met young Ukrainian refugees on a visit to Edinburgh Zoo.

She and her husband Vice Admiral Sir Tim Laurence are in the Scottish capital as members of the royal family visit the nations of the UK over the long weekend to celebrate the Queen’s Platinum Jubilee.

They also boarded the amphibious assault ship HMS Albion as it was docked in Leith, where she cut a commemorative cake.

The couple visited the Penguins’ Rock enclosure – which is home to gentoo, rockhopper and king penguins – including Sir Nils Olav, a Brigadier in the Norwegian King’s Guard.

They met staff including animal keeper Lisa Girot and fed the penguins with blue whiting from a bucket.

Earlier, the princess met children from Ukrainian orphanages who were taking part in an animal handling session with a snake and an armadillo in the Rainforest Room at the zoo.

The children were rescued from the war-torn country and brought to Scotland with the help of the charity Dnipro Kids, formed by supporters of Edinburgh’s Hibernian FC.

Their visit on Friday was organised by the zoo’s community team.

Alison Amivisca, community and discovery programme manager at RZSS, said: “We were delighted to welcome HRH The Princess Royal to Edinburgh Zoo today as part of the Platinum Jubilee celebrations.

“As our wildlife conservation charity’s royal patron, it was exciting to show The Princess Royal the work we are doing to help more communities connect with nature and inspire change.

“It was also fantastic to see her feeding some of our cheekiest residents, our gentoos at Penguins’ Rock.”

Later on Friday, the Princess Royal visited HMS Albion as it was docked at Ocean Terminal in Leith next to the Royal Yacht Britannia.

Crowds greeted her as she arrived at the harbour on Friday afternoon, accompanied by her husband.

They inspected a guard of honour before she was welcomed on board by Captain Simon Kelly.

The Princess Royal launched the amphibious assault ship in 2001 and is the ship’s official sponsor.

The 18,500 tonne ship was deployed to the Arctic at the start of this year for one of the largest NATO exercises in the region for decades.

In a marquee on the flight deck, the Princess met representatives of charities the royals support across Scotland, as well as members of the ship’s crew and embarked Royal Marines.

She cut a commemorative cake which marked the platinum jubilee.

Edinburgh’s Lord Provost Robert Aldridge told the assembled guests: “We’re especially delighted ma’am, that you and Vice Admiral Sit Tim Laurence have been able to join us for this very special day, which has culminated here in this superb event here on board HMS Albion.”

The Duke and Duchess of Cambridge and the Earl and Countess of Wessex will visit Wales and Northern Ireland respectively.

William and Kate will travel to Cardiff on Saturday to meet some of Wales’s best-known performers before a Platinum Jubilee celebration concert.

They will meet the crew behind the event at Cardiff Castle, learning about the lighting, sound and visual effects for the show before helping with the final preparations.

The performances will finish at 7pm and the crowds can then watch the Platinum Party at the Palace on giant screens in the castle grounds.

Over the extended Jubilee bank holiday weekend the Earl and Countess of Wessex will carry out two engagements in Northern Ireland.

Sophie and Edward will meet children taking part in multicultural street performances, join in with art and craft sessions, and speak to people sharing their personal memories of meeting the Queen.

Greyfriars Bobby may have been a different breed of dog, book suggests