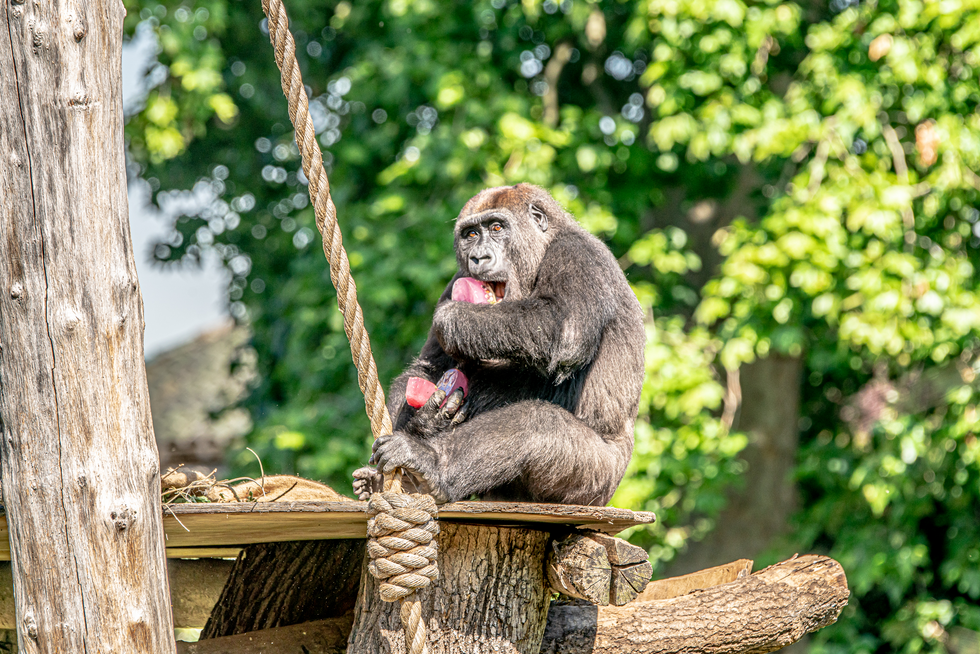 Zoos across the UK have taken extra precautions to keep their animals cool amid the soaring temperatures, with some offering icy treats and others shutting their gates to the public.

After the Met Office issued the UK’s first red extreme heat warning for Monday and Tuesday, animal parks such as Chester Zoo have closed their doors for “the safety of our staff, visitors, animals and plants”.

It’s another scorching day at the zoo! Our Animal Care Team are busy making sure our animals are keeping cool with… https://t.co/YDXdEcPACf
— Colchester Zoo (@Colchester Zoo) 1658046614

At Bristol Zoo, squirrel monkeys, kea parrots and red pandas were given ice lollies filled with vegetables, leaves or mealworms, while the seals tucked into frozen fish in ice blocks as they frolicked in their pool.

Animals at ZSL London Zoo were also given “healthy ice pops” made from “frozen sugar-free iced tea, filled with nuts and seeds”.

A spokesman said: “Primates such as the gorillas and squirrel monkeys love an ice lolly, just like us.

“When the temperatures rise, zookeepers make sure that every animal has plenty of water and cooling treats. They can choose to spend their time in their cool indoor dens, or under the cool shade of the trees in their outdoor paddock, or they can choose to sunbathe if they prefer.”

Chester Zoo said it will be closed on Monday and Tuesday, tweeting: “Due to the extreme heat forecast… we will be closed for the safety of our staff, visitors, animals and plants.”

Dr Nick Davis, assistant curator of mammals, said the zoo’s animals are finding their own ways to keep cool in their habitats.

“The likes of our greater one-horned rhinos, black rhinos and capybaras will cool off by submerging themselves in their mud wallows, while big cats such as Sumatran tigers and jaguars might beat the heat by taking a dip in their pools,” he said.

“Our keepers may deliver special fruit and vegetable ice lollies to our chimps, bears and red pandas, with animals including Asian elephants treated to refreshing showers.”

Yorkshire Wildlife Park near Doncaster also said it will be closed on Monday and Tuesday to allow rangers to “concentrate fully on caring for our animals”.

“In the Yorkshire Hive, the Hex Hotel, Wilds Cafe Bistro, Uproar Play Barn and the shops will all remain open as they are air-conditioned,” a spokesman said.

“We will be in touch with ticket holders to rebook them and will reopen on Wednesday 20th July.

“We apologise for any inconvenience caused but believe in these extraordinary conditions closing is in the best interests of our animals as well as team and visitor safety.”