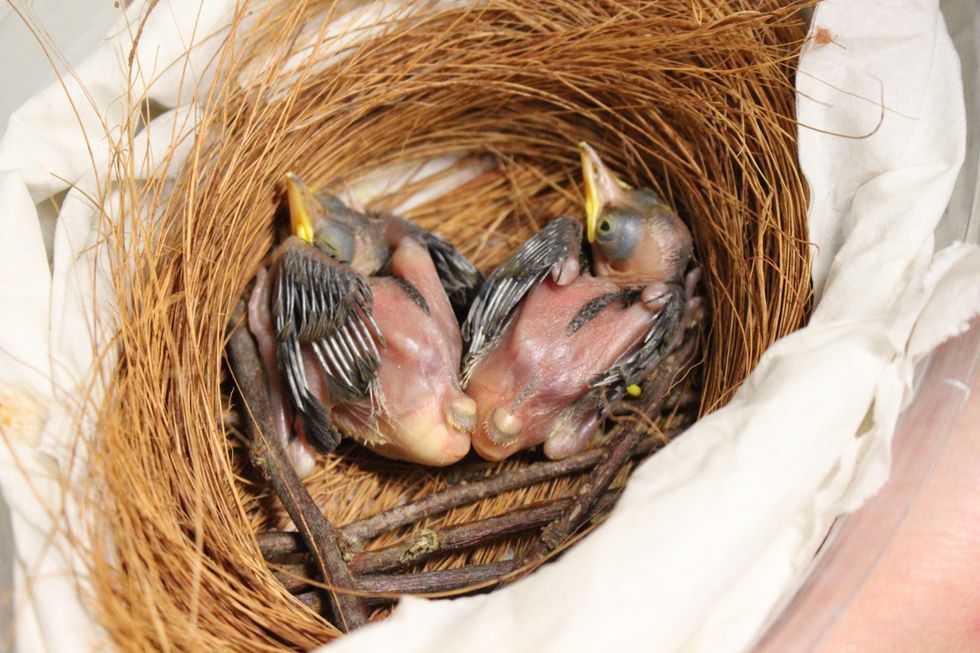 Two critically endangered baby birds have been saved by zookeepers who fed them 12 times a day after their parents abandoned them.

Keepers at ZSL Whipsnade Zoo stepped in to hand-rear the two blue-crowned laughingthrush chicks (Pterorhinus courtoisi) after they noticed the youngsters’ parents had stopped looking after their eggs.

The intense care schedule followed by the keepers simulated natural parenting patterns by turning the eggs five times a day while they were in the incubator, creating a nest for the newly-hatched chicks to grow in and feeding them 12 times a day, until the birds were able to feed themselves.

Early videos, recorded by the keepers when the chicks were just days old, showed the tiny, featherless laughingthrushes lifting their open beaks for finely chopped pieces of food, fed to them with special tweezers.

“When building the nest, for example, we had to make sure it’s cosy enough for them to huddle up together but had enough space for them to move apart a little if they get too hot.

“We made their nest with coconut fibres and astroturf, and included twigs small enough for them to get their tiny feet around, as it is vital that they develop the muscles to grip things.

“We hand-fed the chicks a pureed mixture at first, but gradually weaned them onto a mixture of fruit and insects.”

The chicks are now around four weeks old, and have begun flying around the fledgling enclosure with their full plumage.

Laughingthrushes originate from the forests and shrubland of China’s Jiangxi Province but there are now thought to be less than 250 adult blue-crowned laughingthrushes left in the wild.

The zoo’s chicks are part of a Global Species Management Plan for the rare species, classified as Critically Endangered by the IUCN Red List of Endangered Species.

As a social species, laughingthrushes usually stay with their flock throughout winter before finding mates in the summer months.

When the chicks are old enough, they will join their parents in the Zoo’s blue-crowned laughingthrush habitat.