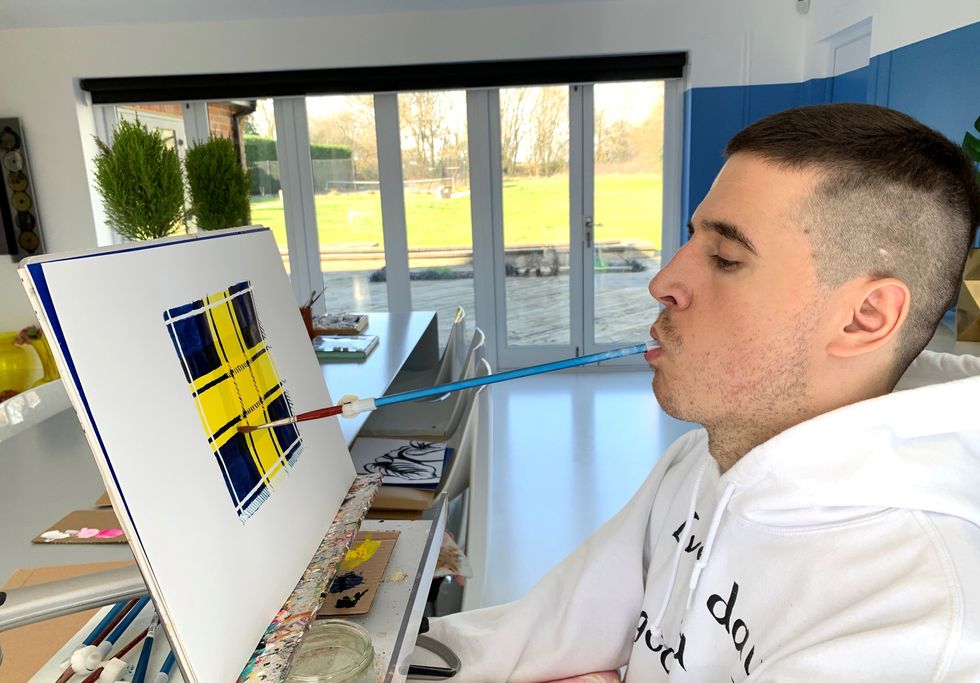 An artist who paints with his mouth after being left paralysed following a diving accident has created artwork to raise funds for the charity set up by Doddie Weir as he battles against motor neurone disease (MND).

Henry Fraser, 30, created his own take on the “Doddie 5 Tartan” to fund vital research into MND, and the piece embodies what it means to “turn life’s hardships on their head”.

The former Scotland international rugby star’s positive outlook and upbeat nature is a “huge inspiration” to Mr Fraser, who formerly played the sport for the Saracens academy.

He played rugby throughout his childhood and adolescence until he was 17, when he received life-changing injuries following a diving accident in Portugal in 2009 which left him paralysed from the shoulders down.

Mr Fraser’s love of art, which he had through his childhood, was rekindled in 2015 after he learned to paint with his mouth.

“Like Doddie, I was an active man prior to my accident. Having that taken away so suddenly was completely life changing,” he said.

“It forced me to re-evaluate and recalibrate absolutely everything and meant transforming my physical strength into mental strength.

“Doddie has done just that, and completely taken it in his stride. He is extremely happy and joyful, and that positive attitude has made such a huge impact on me.

“Although we are going through two very different things, I really look up to him as a role model. The way he approaches every day with drive and determination is amazing, and he’s inspired me to live my life the same way.”

Doddie Weir is a personal inspiration to Henry Fraser, who has produced artwork inspired by his tartan (Ian Rutherford/PA)PA Archive/PA Images - Ian Rutherford

Mr Fraser has now created hundreds of designs, showcasing everything from famous sportspeople to exotic animals and landscapes.

Prints of the tartan painting can be bought online via frameuk.net/product/henry-fraser/, with all proceeds from the sales going directly towards the My Name’5 Doddie Foundation which was set up by Doddie Weir.

Mr Fraser said: “The painting isn’t intended to be perfect.

“The lines are a bit off and it doesn’t sit perfectly straight, but that’s an honest representation of what life is like.

“This painting is a reflection of two people who have battled something life-changing. Even though Doddie and I are going through two very different things, I think the piece brings our experiences together.

“Charities like the My Name’5 Doddie Foundation are absolutely vital when it comes to supporting people going through huge life changes. If I can change just one person’s life through the funds we raise with these digital prints, then I’ll know it’s a job well done.”

Jill Douglas, chief executive of the My Name’5 Doddie Foundation, said: “We are really grateful to Henry for kindly creating this special painting for the foundation.

“Henry is an incredibly talented artist who shares the same positive outlook on life as Doddie. We really appreciate his support and it’s because of people like Henry that we can continue to fund vital research into MND and try to give people living with this terrible disease some hope.”

Please log in or register to upvote this article
charityDisabilityMND