Cinematographer Sir Roger Deakins says knighthood is not just for him 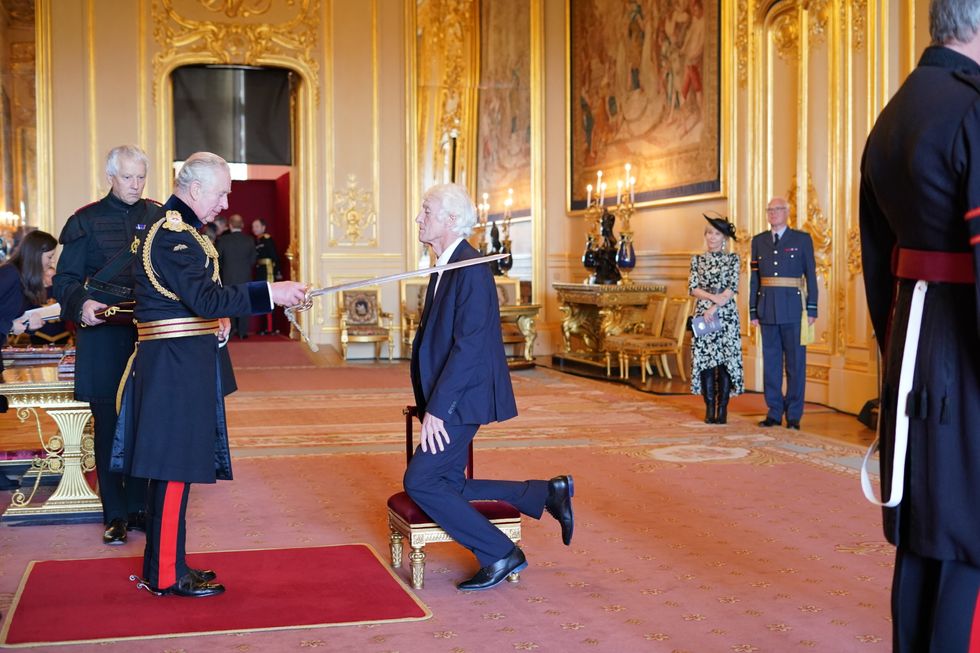 Oscar-winning cinematographer Sir Roger Deakins has said his knighthood is for everyone he has ever worked with as he received the royal honour at Windsor Castle.

The Devon-born cameraman, 72, was knighted for services to film by the Prince of Wales at an investiture on Tuesday.

Speaking to PA afterwards, he said: “These things make me very nervous but I feel a bit more relaxed now.”

“It was very touching actually, very moving. Especially seeing everybody else involved.”

Few boast a body of work like that of Sir Roger, the most decorated cinematographer in Bafta history, who counts The Shawshank Redemption, Fargo, 1917, A Beautiful Mind, Skyfall and Blade Runner 2049 among his best-known features.

Widely considered one of the most influential cinematographers of all time, his collaborations with renowned directors such as the Coen brothers and Sir Sam Mendes have won him countless awards.

Among those are five Baftas for best cinematography and two Oscars, which he collected in 2018 for Blade Runner 2049 and two years later for the First World War drama 1917.

Everybody that's getting an award or has got an award, it’s just they're a figurehead for something that's much bigger

Sir Roger stressed his knighthood, as well as his other recognitions, are for his collaborators too, crediting the “many amazing people in the film industry”.

He said: “This really is for everybody I’ve ever worked with, because you are a product of everything and everybody that has been around you your whole life.

“That’s the pity of awards and, really, everybody that’s getting an award or has got an award, it’s just they’re a figurehead for something that’s much bigger, broader, involves more people.

“So it’s like when I won an Oscar, that’s for my crew as much as for myself, because it’s a tribute to them.”

Asked what he was most proud of in his five-decade career, Sir Roger said: “I’m not really proud of things.

He said that Charles had asked him during the ceremony whether he was still enthusiastic about his job and what he was up to now.

“I’m starting to work on a film at the moment with Sam Mendes.”

Sir Roger and Sir Sam first worked together on the 2005 film Jarhead, then on Revolutionary Road and James Bond adventure Skyfall.

Their most challenging project together was 1917, which was shot as if in a few long continuous takes and of which Sir Roger has said that the “pressure was pretty extreme”.

His wife, script supervisor Isabella James Purefoy Ellis, said the investiture had been “really quite moving”.

She said: “You get greeted at the door by people who say ‘we’re so glad you’re here’.

“You go to the Oscars and they say ‘oh, you’re so lucky to be here’, so there’s such a switch.”

After college he applied for the National Film School but failed to secure a place as his photography was reportedly considered not “filmic” enough.

He spent the next year photographing the local area’s rural life and was eventually admitted.

After graduating, he worked as a cameraman on documentaries about conflicts in Africa, and as crew on a yacht for nine months to film the Whitbread Round The World Race.

During the late 1970s and early 1980s he worked on music projects, including Blue Suede Shoes, about the UK rockabilly scene.

In 1991, he began his long-term collaboration with the Coen brothers, starting with the film Barton Fink before going on to O Brother, Where Art Thou? and True Grit.

He recently published a collection of his still photos that date back to the 1970s.

Please log in or register to upvote this article
MoviesRoyalShowbiz