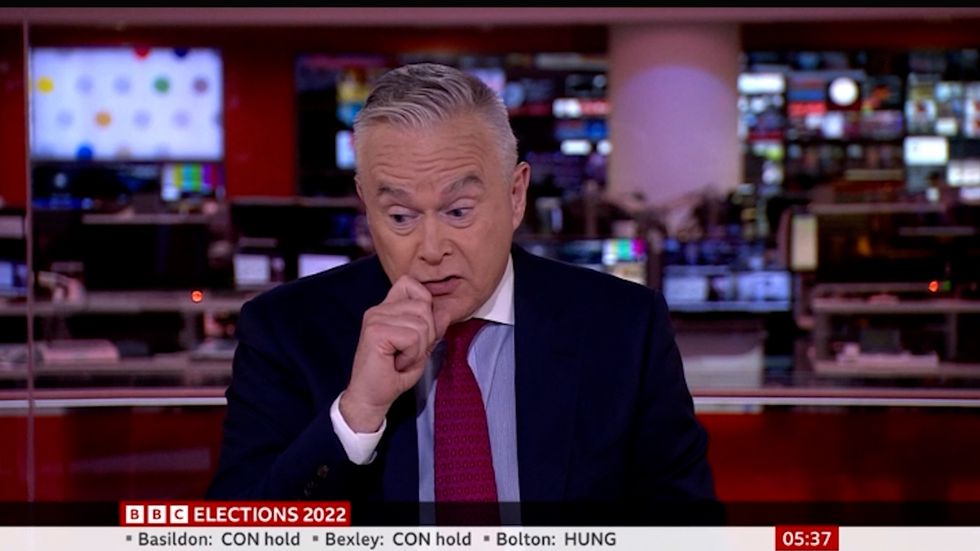 Huw Edwards admitted having had “a little bit of croissant” as he wiped his mouth and told viewers he was just finishing the pastry.

The veteran broadcaster made the on-air confession while presenting the BBC’s 2022 local election coverage.

He said: “I’m going to admit to you I’ve just had a little bit of croissant. So I’m just finishing it and I’m ashamed to say that but there you go. It’s 20 to six in the morning…”

A bleary-eyed Edwards later joked about his gaffe with political scientist Professor Sir John Curtice, who appeared on the programme to offer analysis of the results.

Introducing the veteran elections expert, Edwards said: “I’m just wondering whether Sir John Curtice has been helping himself to French patisserie this morning as he is chomping through his data.”

Sir John replied: “I was just about to say, Huw, whether you were going to send them up to us, because they have certainly not reached here yet.”

Edwards said: “I shall make a delivery at six o’clock Jonathan, no question.”

He later retweeted a video of the moment writing “Crumbs” with emojis of a croissant and French flag.

A weather presenter on The Zoe Ball Breakfast Show on BBC Radio 2 later riffed on the incident, taking a bite of a doughnut mid-broadcast.

She said: “I am going to admit to you that I have just had a little bit of doughnut. I am just finishing it. I am ashamed to say that, but there you go.”

Last year the 60-year-old Welsh journalist and presenter anchored the BBC’s coverage of the Duke of Edinburgh’s funeral in April.

In 2017 a technical fault led to him being shown sitting in silence at the start of the BBC News At Ten.

Viewers on some devices saw Edwards seemingly unaware that the cameras were rolling for a few minutes as he wrote notes and looked down at a screen.

After the broadcast, Edwards tweeted a photograph of a can of ale along with the words: “I think I’m going to enjoy this little beauty after that Ten. Iechyd da!”

Earlier this year, Good Morning Britain’s Laura Tobin showed viewers she was eating chicken nuggets for breakfast and also spilt her drink on air having overslept following a late night after the programme won a charity news quiz.

Please log in or register to upvote this article
BBCHuw Edwards