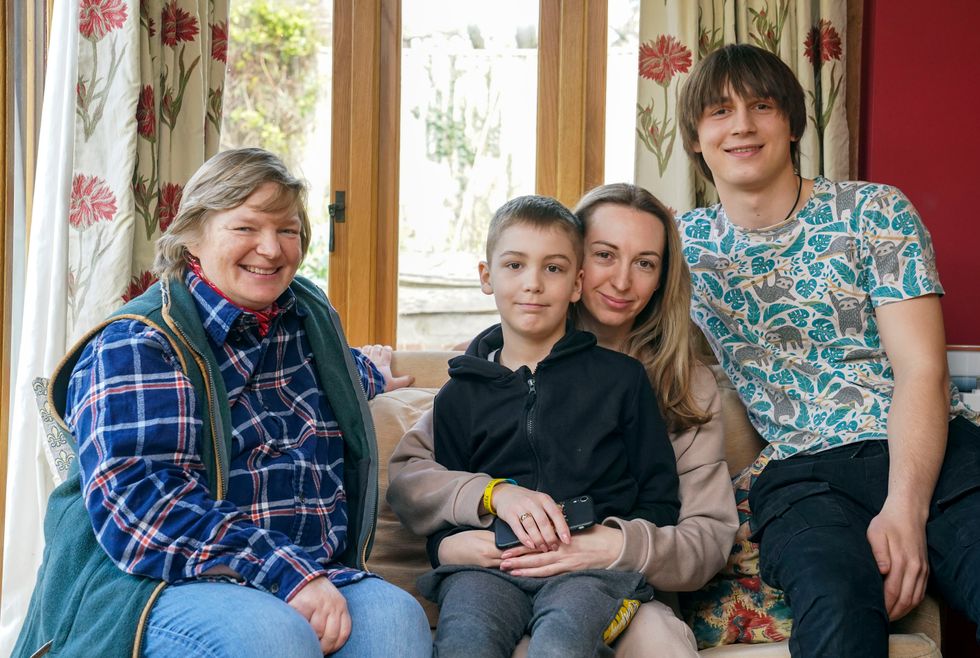 Ukrainian refugees as they settle into their new home in North Moreton, Oxfordshire (Steve Parsons/PA)

The first Ukrainian refugees to arrive in a village in Oxfordshire have said their UK hosts “don’t feel like strangers at all, more like family”.

The village of North Moreton – which is home to around 350 people – has prepared homes for 45 refugees fleeing the Russian invasion of Ukraine.

The project is being co-ordinated by experienced fundraiser Polly Vacher, 78, with the help of sponsors from 16 local households.

Irina Kryvoviaz, 39, her son Sasha Kryvoviaz, eight, and her godson Yaroslav Kryvoshyia, 17, arrived in the UK on April 7 having left their home of Cherkasy in Ukraine.

They are being hosted by Sarah Allen-Stevens, 55, and her husband Steven Rudge at their home – Mr Kryvoshyia will have his own room, while Ms Kryvoviaz and Sasha will stay in another.

“She’s very moved by the fact that Sarah and Steve were able to give us an opportunity to live here,” Mr Kryvoshyia, translating for Ms Kryvoviaz, told the PA news agency.

“It’s great for Ukrainian people to come here and feel safe,” Ms Kryvoviaz said, before adding of the conflict: “I cant imagine how this could happen in 21st century.”

Ms Kryvoviaz has had to leave family, such as her husband, behind, while Mr Kryvoshyia’s mother, father and brother remain in Ukraine.

“I worry about them every minute, I think about them, how they are,” said Ms Kryvoviaz.

“I slept this night maybe five hours because I woke up and I couldn’t sleep because I have so many thoughts in my head.”

Mr Kryvoshyia added: “My mother doesn’t want to move out yet, she said only if their situation will get worse.

“(She) decided that I should move out to some other country, I didn’t really want to. I wanted to help her.”

Ms Allen-Stevens said that when she and her husband saw the news in Ukraine, they were moved to do something, adding “we couldn’t sit back knowing that we had the space”.

She added: “I have to say that when these guys moved from where they were to start travelling I must have been like a neurotic mother.

“You form an emotional attachment very quickly with your guests.

“I’m just so glad that they’re here and they’re safe and we can start working on the next steps.”

The village hopes to host dozens of refugees so those arriving can have their own community of Ukrainians to communicate with.

Mr Kryvoshyia said he and his family were “really happy” in their new home.

“When I arrived everything felt different,” he said.

“The whole village seems very beautiful and you can see that it has some history.

“As you can see there are a lot of Ukrainian flags on other buildings so it’s really nice.”

Please log in or register to upvote this article
refugeesRussiaUKUkraine

Latest trade figures reveal just how bad Brexit has been