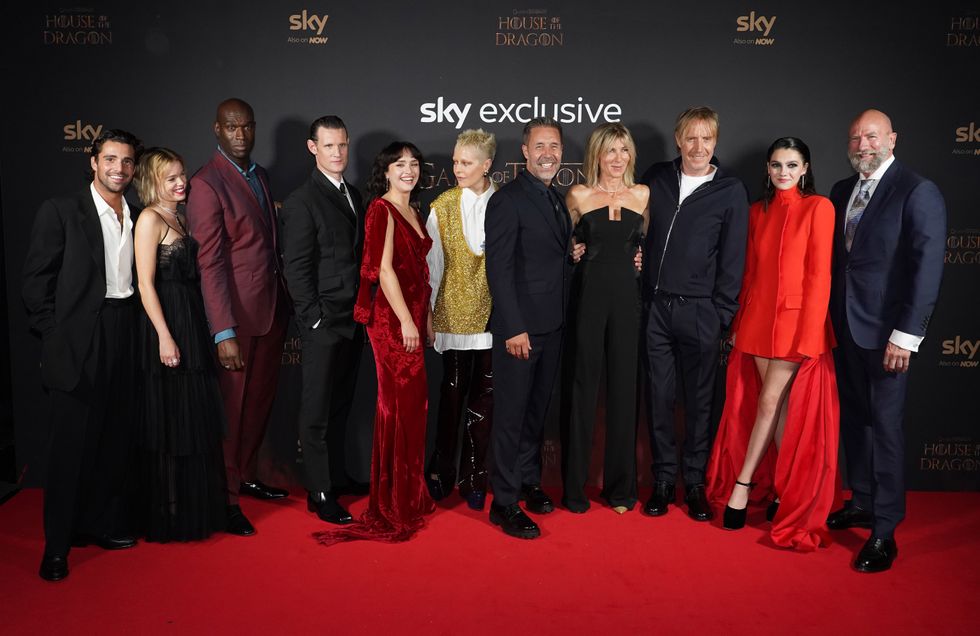 The cast of the highly anticipated Game Of Thrones prequel House Of The Dragon gathered in London’s Leicester Square on Monday evening for the premiere of the new series.

Former Time Lord Matt Smith, who plays Daemon Targaryen in the HBO series, donned a double-breasted black suit with a chunky silver chain over a black tie and sported slicked back hair while walking the red carpet ahead of the show’s launch on Sky next week.

House Of The Dragon is a fantasy tale based on author George RR Martin’s Fire And Blood, which is set 200 years before the events of Game Of Thrones.

The HBO drama chronicles the beginning of the end of House Targaryen and the events leading up to the Targaryen civil war, known as the Dance of the Dragons.

Paddy Considine, who stars as King Viserys Targaryen, the fifth king of the Targaryen dynasty to rule the Seven Kingdoms, attended the event in a navy suit, accessorised with a tie featuring a small blue skull.

Emily Carey, who portrays a young Alicent Hightower in the series, dazzled on the red carpet in an orange ensemble with smoky eye make-up and her dark hair slicked back from her face.

Rhys Ifans opted for a more casual outfit of a navy zip-up jacket and matching trousers over a white T-shirt.

The Welsh actor, known for his role in romantic comedy Notting Hill, stars as hand of the king Otto Hightower in House Of The Dragon.

Joining Ifans, 55, on the red carpet was his on-screen daughter Olivia Cooke, who plays an older Alicent Hightower.

The 28-year-old English actress stunned in a blood-red velvet gown with floral detailing, accompanied by a pair of simple long-hanging silver earrings.

Also on the red carpet was Steve Toussaint, who portrays Corlys Velaryon, a famed nautical adventurer who has built his house into a powerful and wealthy seat.

The British actor, who is of Barbadian descent, opted for a burgundy suit with a blue shirt.

The 22-year-old was given her break-out role in the series after being cast as Rhaenyra Targaryen.

D’Arcy, 30, previously starred in Wanderlust and Truth Seekers before landing the role in the show.