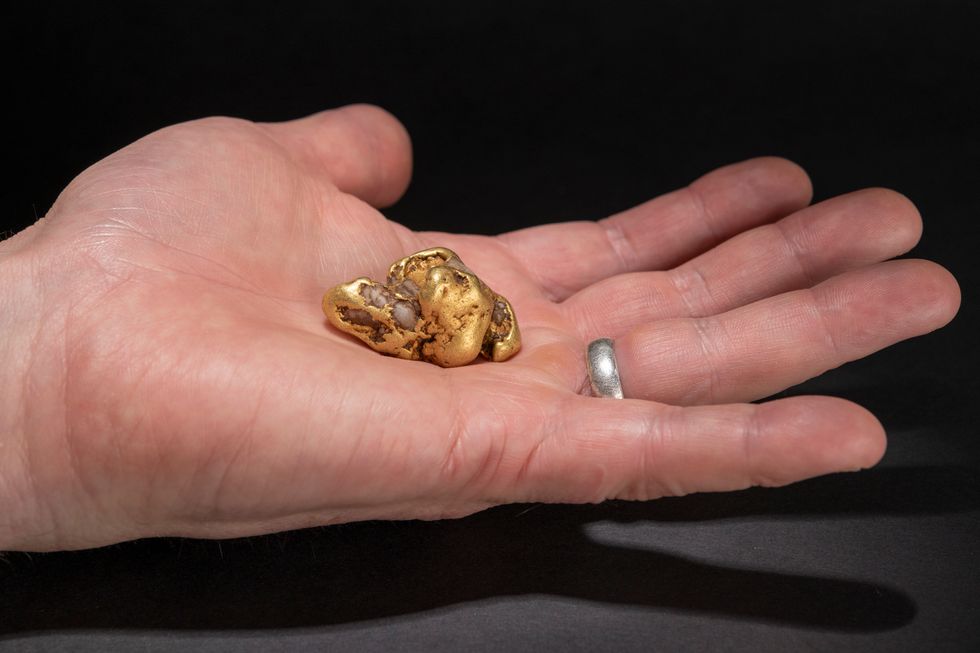 The gold nugget was found in a Scottish river (The Hunterian, University of Glasgow/PA)

The largest gold nugget found in Scotland in more than 400 years has gone on display in a public collection.

The “Douglas” gold nugget weighs 85 grams (three ounces) and was found in a river in Perthshire in 2017.

Due to its geological and cultural importance, it was felt important to preserve it in a public collection, and it is now on display at the Hunterian Museum, University of Glasgow.

The nugget is named after the finder, who otherwise wishes to remain anonymous.

Scottish gold laws date from late-medieval times and grant ownership of gold to the Scottish Crown, however, Crown Estate Scotland granted a formal transfer of the nugget to the Hunterian in Glasgow.

Most Scottish gold has been found as dust, or sand-sized flakes in river sands and gravels, eroded from much older rocks.

John Faithfull, curator of rocks and minerals at the Hunterian, said: “Big bits of gold are really scarce anywhere so this is an 85 gram nugget and, even in Alaska and Australia in gold rush places, 85 gram nuggets are pretty rare, so it’s a really interesting thing to find.”

In the 16th century, large quantities of gold dust and nuggets were found in the Scottish Borders, especially at Glengaber Burn and Crawford Moor and many of these finds were made into coinage and the Scottish royal regalia.

Most surviving large gold nuggets were found in the 19th century, but none are as big as the Douglas Nugget.

Mr Faithfull said it was interesting to see such a large nugget as gold tends to be melted down and turned into objects.

The nugget was found in Perthshire (The Hunterian, University of Glasgow/PA)

He said: “Gold doesn’t usually survive, we’ve got historical rumours of big nuggets that were found in the 16th century in Scotland, possibly up to one kilo, but they were all turned into coinage for the Scottish regalia, the honours of Scotland, the royal insignia, or into coins to issue on behalf of the state to show how wealthy the country was.

“So none of those nuggets survived at all and this is by quite some margin the largest confirmed and known surviving Scottish nugget.”

Crown Estate Scotland and its mineral agent (Wardell Armstrong) worked with the finder of the nugget, National Museums Scotland and the Hunterian to preserve it in a public collection.

The finder received some payment from the Hunterian in agreement with Crown Estates and with support from the National Fund for Acquisitions.

The new underground gold mine at Cononish, near Tyndrum, Stirlingshire, where Scotgold holds a lease of the gold and silver rights from Crown Estate Scotland, is currently producing nearly 1000 ounces (28 kilos) of gold per month.

However, the Cononish gold never forms large nuggets and most is invisibly small micro-particles in rock which require careful processing to recover.