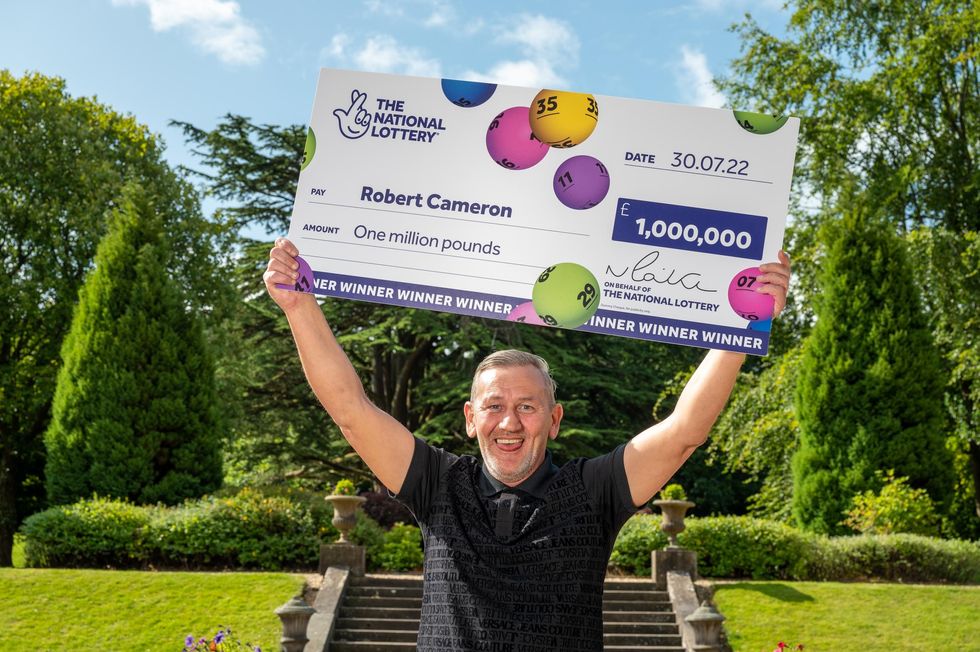 Robert Cameron, 53, won £1 million on the Lotto after he followed the advice of his late mother (National Lottery/PA)

A father-of-five is £1 million richer after he followed his late mother’s advice and snapped up two lottery tickets.

Robert Cameron, from Glasgow, matched five numbers and the bonus ball in the Lotto draw on Saturday with a lucky dip ticket he had initially forgotten to buy.

The 53-year-old bought a ticket for the lottery for the first time in about a year on Friday July 29 with the change he happened to have in his pocket when he passed the counter at his local Asda in Maryhill.

When he checked the result the next day, he had a “chuckle” to himself when he realised he had won just £3.70 – and thought that would be all he would ever win.

“She always told us if you win something, take it and put it into something else. So I decided I’d follow her advice and use my winnings to buy two lucky dips for that night’s Lotto draw.”

But Mr Cameron initially forgot to buy his tickets, and had it not been for a call from his youngest son asking if he would go and pick him up, he might not have won at all.

“I decided seeing as I was heading back out again anyway, I may as well nip into Asda and get the lucky dips. And I’m so glad I did,” he said.

Despite the lucky numbers coming out in his favour, it took him a while to realise he had won the seven-figure sum.

“I just went about my usual routine – fed the fish, got a cup of tea – and then thought I better check those tickets,” he said.

“I always check on the app and of course the same congratulations message popped up as the day before with my £3.70 win. I expected to see something similar and when I looked at first, I thought it said £1,000.

“It took a third look for me to realise I was a millionaire. I even Googled the winning numbers to double check.”

He then called the National Lottery line to verify the ticket and check that he had won the life-changing sum.

He said: “The lady I spoke to was lovely, but I had to wait a minute or so while she checked everything out. It was the longest minute. Hearing her say those words – that I had actually won £1,000,000 – was so surreal.”

The first person he told was his youngest son, but it took him some time to convince him it was true.

“I have a great relationship with my four sons but I am always joking with them, so when I told my youngest he didn’t believe me at first,” he said.

“It took me half-an-hour to convince him it was real. I couldn’t quite believe it myself. I think I’m still in shock.

“I was then worried about keeping the ticket safe and making sure I didn’t lose it, so I put it inside a picture frame behind the photo. I didn’t even want to leave the house with the ticket still sitting there.”

A new house and car will be first on the list for Mr Cameron, who said he has always wanted a Range Rover, as well as a family holiday.

“I want to be thoughtful with how I use the money and do things that will be good for my family,” he said.

“I am so grateful I followed my mum’s advice – I feel like my luck was thanks to her looking down on me.”

Please log in or register to upvote this article
GlasgowNational Lottery

Can you pass a British citizenship test? 36 per cent of people can't