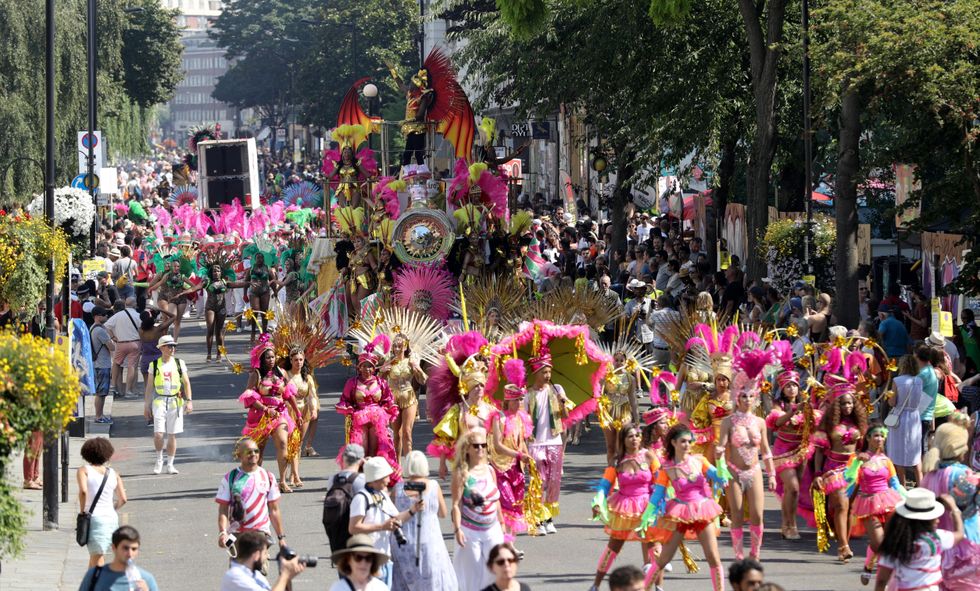 Notting Hill Carnival participants have said they are looking forward to feeling the bass of the music and seeing their creations “brought to life” as the event returns to the streets of London.

The carnival, which takes place over the last week of August every year, has been online in recent years due to the Covid-19 outbreak but is set to make its in-person comeback on August 28 and 29.

Marelle Steblecki, 29, a womenswear and carnival designer, who is currently based in Kent, has been designing costumes for this year’s event and told the PA news agency she is “excited” to finally wear a costume she planned to wear pre-pandemic.

“I’ve had my particular costume, which is rose gold, purple and teal booked with my carnival band (United Colours of Mas) since 2018, so I’ve been waiting to wear this for two years,” she said.

It's insane to see how much your little bit of help actually goes towards creating something out of this world, like stuff of fairytales

“The carnival band that I’m playing with chose their theme as Africa.

“It is good for people to see that there are true influences behind each costume.”

She said that she feels as though the carnival “chose” her as she was put in contact with South Connections, which was one of the longest-standing carnival bands within Notting Hill, by her school in year nine for work experience.

“When summer came around, I kept going and because I was there all the time, I became a reliable source of help.

“People who were doing gemming or feathering would pull me aside and take me under their wing until I expressed the desire to design costumes, and they nurtured my talent and gave me the confidence to pursue this.”

Ms Steblecki said helping to design the costumes has been the “stuff of fairytales”.

“I didn’t realise the gravity of all the work that we had been doing during summer until I actually got onto the road at Notting Hill and they were standing in their carnival costumes,” she said.

“Once you actually look at everything from a distance, it’s insane to see how much your little bit of help actually goes towards creating something out of this world, like stuff of fairytales.”

She has also been creating custom orders for people including one for a woman turning 40 who wanted to a costume to reflect her “life”.

“She wanted her costume to express femininity, beauty and her life, so I have taken her concept and the colours she would like, and interpreted that in feathers and gems and glitter,” she said.

“We always try and make it the best that the person wants to receive and go above and beyond, so that they have that ‘I’m so in love and I can’t wait to wear that’ feeling.”

Ms Steblecki is most looking forward to “walking down the roads of Notting Hill” this year.

“You start to feel the bass of the music, like it starts in the soles of your feet and slowly moves up towards your chest,” she said.

“Being on the open streets of London, where people are usually walking around with their heads in their phones to seeing the whole atmosphere change because of the event feels like a parallel universe where everyone is together and celebrating.”

Pepe Francis MBE, 79, who lives in London and is director of the Ebony Steelband Trust, who will be performing at the carnival, told PA that he is “glad the carnival is coming back”, even though preparation has been “madness”.

“A lot of people have been waiting for it to come back,” he said.

“If the pre-carnival event is anything to go by this year, it’s going to be absolutely chocker.”

The steel band which has been at the carnival since its “inception”- for over 50 years – is set to participate at the event again this year and are like a family, despite members leaving and joining over the years.

“Since the band has started, I’m on my fifth generation of people and there’s been a lot of changes,” he said.

“But our members look forward to carnival every year and practice takes place regularly from year to year.”

He added that his fondest memories were from “back in the day”, when “we could roam through every street in Notting Hill”.

His love of carnivals extends further than just Notting Hill.

“I think my best memories are growing up in Trinidad, but I go to carnivals all over the world, in New York and Miami,” he said.

“I love all carnivals, maybe the international ones even more because I don’t have to work as part of them,” he joked.

Despite stepping down as an organiser around three to four years ago, he said he will “always be involved in one capacity or another”.

“I was involved in running the carnival for the best part of 40 years and even though the board and committee will change over the years, I will always be involved and connected to it.”