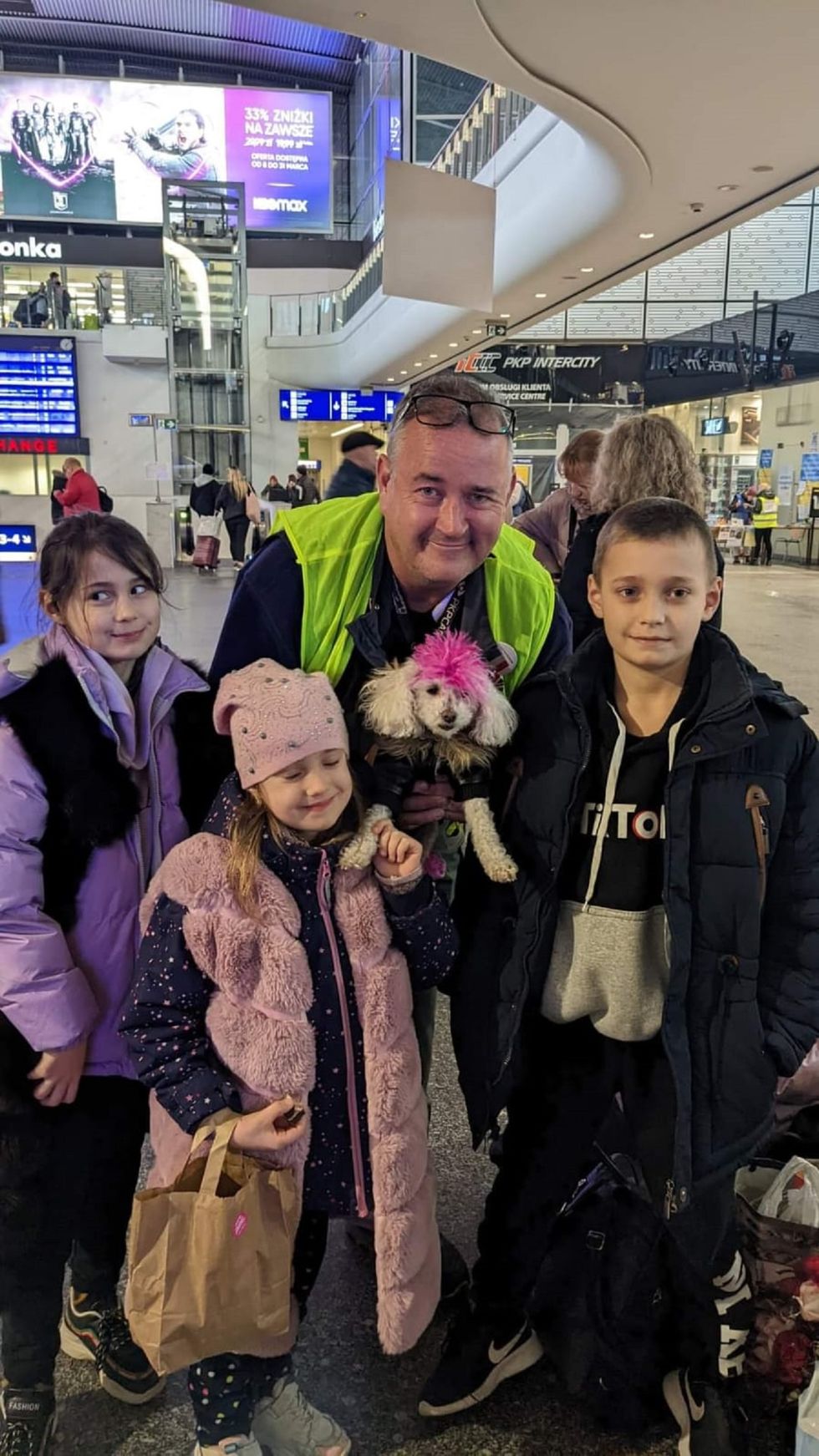 A toy poodle with a pink mohawk, described as a “punk rocker” by her owner, has been putting smiles on the faces of young Ukrainian refugees in Poland.

The former ship’s captain, 48, from the US, said Juno has been to more than 30 countries but has never been in a situation like the one in Poland right now.

But she has quickly become a favourite among refugees fleeing the war in Ukraine since she arrived with Mr Whelan in early April.

He told the PA news agency: “She’ll sit there and let a little kid hold her and pet her. It really makes a big difference to them.

“They don’t know what anyone’s saying because they speak Ukrainian and people are speaking Polish or whatever.

“And they’re kind of zombified. You know, they have a blank expression on their face.

“Juno’s really good at lighting these kids up and getting them to smile and have a little bit of gleam in their eyes.”

Mr Whelan, who grew up in Boston but now lives in Hollywood, has travelled the world with Juno, including a tour of the UK.

The pair headed to Poland to help refugees leaving Ukraine, with the option of dropping Juno off with friends in Europe if she was unhappy about being in the thick of it.

But any concerns were quickly dismissed and Juno is enjoying her role alongside Mr Whelan, who is a co-ordinator and supervisor at the station.

Mr Whelan said: “I was on the phone all day (on Wednesday) morning and she got annoyed and started pawing my face.

“I’m like ‘what do you want?’ It wasn’t water… she wanted to go see the kids.

“So we made a round and then she was okay. She was looking forward to doing a little work.

“With the kids in the station, it’s great. I just get down on their level and reach out… even though they don’t speak I’ll make the petting motion.

“They’ll do a little petting of Juno or we’ll let them hold her if it looks like the kids have it together.

“You could have a four-year-old in the middle of a full-blown temper tantrum, (Juno) can flip them out in 10 seconds and he’s smiling and giggling.”

Asked how Juno’s pink hairdo came about, Mr Whelan said: “I had a toy poodle with my previous girlfriend and she didn’t like me to give the dog a mohawk.

“So when I got Juno on my own, I’m like, she’s going to have whatever I want. She’s a little bit of a punk rocker.”

The pair will continue to offer assistance in the area until mid-May, as the Russian invasion of Ukraine nears the two-month mark.

Mr Whelan said he hopes people can see that many volunteers are attempting to make the situation better.

“I like that Mr Rogers quote, you know – when something terrible happens, look for the people who are trying to do good and help,” he said.

“You can see a lot of good in the world when you see how many people have really made an effort to come here, donate or work remotely to help these people.

“I just like to put that out there, that there’s a lot of people making an effort to help these people and do what they can to make their situation better.”

Please log in or register to upvote this article
DogPolandrefugeesUkraine