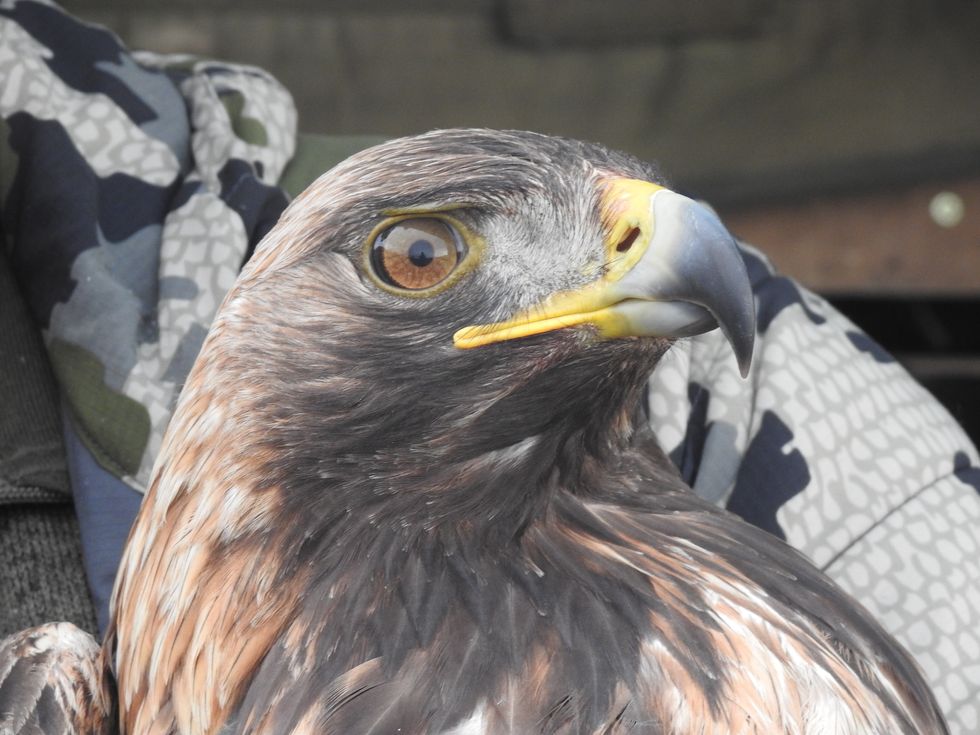 A golden eagle initiative in Scotland has been given a prestigious ecology award for its progress on boosting population numbers.

The award celebrates “outstanding work of ecologists and environmental managers” and is given to “exceptional projects that set an overall impressively high standard”.

Michael Clark, chairman of the charity

Earlier this year, SSGEP was noted as the first in the UK to successfully translocate free-flying young golden eagles – aged between six months and three years – to improve numbers.

These new additions brought the total number of golden eagles in the south of Scotland to around 33 which the team claim is the highest number recorded in the region in the last three centuries.

The released eagles have all settled in the area, with frequent sightings of interactions including with other native eagles.

Speaking of the award, Michael Clark, chairman of the SSGEP board said: “This is testament to the hard work of our pioneering project team and the support of all our partners – from ecologists, raptor experts, vets, funders, landowners and land managers to 14,000 plus community volunteers and special project participants.

“From taking the local population of golden eagles to the highest number recorded here since the early 19th century to creating the UK’s first Golden Eagle Town and Festival in Moffat and opening the first mainland Eagle Information Point in Philiphaugh, the work of the South of Scotland Golden Eagle Project team really is exemplary and has become a beacon for wider support for sustainable conservation management in rural communities.”

Before the initiative began, the team at the SSGEP said there were between two and four pairs of golden eagles across Dumfries and Galloway and the Scottish Borders.

But a supporting study by NatureScot showed that the local habitat is suitable for up to 16 pairs.

Since 2018, the project has successfully translocated 12 golden eagles juveniles collected at about six to eight weeks of age from the Scottish Highlands to the south of Scotland and seven sub adult golden eagles – aged between six months and three years.

The team said the first 12 birds have settled into their new habitats and are fending for themselves.

Covid-19 restrictions prevented the translocation of eagle chicks in 2020, but during the first lockdown, Beaky was the first of the project’s eagles to venture south of the border and visit the North Pennines area, where there have been no breeding pairs of eagles for many years.

She was also later seen demonstrating potential courtship behaviour with Skan, one of the male eagles who had been translocated to the area SSGEP.

Announcing the award, Jason Reeves, of CIEEM, said: “Our vision at CIEEM is to create a healthy natural environment for the benefit of current and future generations, and the South of Scotland Golden Eagle Project is a fantastic example of this.”

Great news! The South of Scotland Golden Eagle Project are the first in the UK to translocate free-flying young gol… https://t.co/fTnEf034yM
— NatureScot (@NatureScot) 1646299789

“NatureScot’s role is to protect and restore nature across Scotland.

“So we’re passionate about returning golden eagles, a vital part of Scotland’s wildlife, to places where they used to thrive.

“This ground-breaking project has accomplished so much over just a few years, bringing a viable population of golden eagles back to south Scotland and inspiring other similar initiatives around the world.”

SSGEP was also considered for the award as winner of the institute’s Best Practice in Stakeholder Engagement title.

The project is supported by Scottish Land & Estates, RSPB Scotland, Scottish Forestry, NatureScot, and The Southern Uplands Partnership and is funded by £1.5 million from The National Lottery through the Heritage Lottery Fund, the Scottish Government and Scottish Power Renewables.

The late professor Tony Bradshaw, who the award is named after, played an instrumental role in founding CIEEM and served as the president of the institute from 1991 to 1994.

Please log in or register to upvote this article
EnvironmentScotland