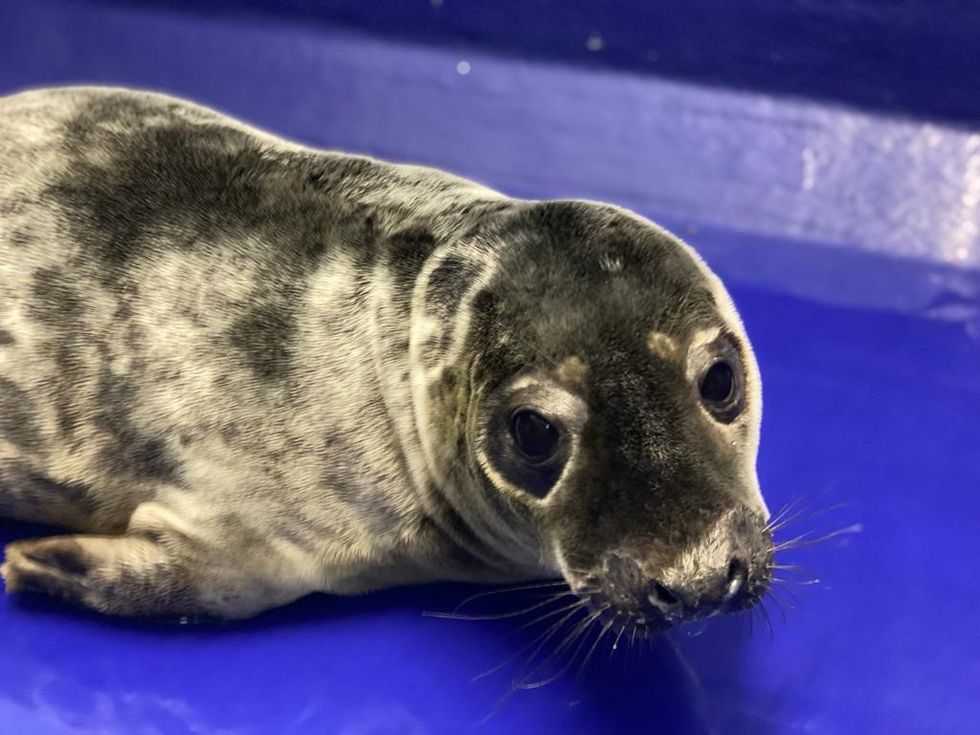 A grey seal pup was found injured and starving on a beach, with a heart drawn around him in the sand.

The pup, named Curry, was taken to the Cornish Seal Sanctuary after being rescued from the beach in west Cornwall last month.

Curry, who has since been successfully released back into the wild, was found with a heart drawn around him in the sand – demonstrating how close members of the public had come to him.

Wildlife experts are now urging the public to keep their distance if they spot a pup on the beach.

Tamara Cooper, curator for the Cornish Seal Sanctuary, said: “Getting too close to a pup on the beach can result in abandonment by the mother, who may be watching from the water, and can be fatal to the pup.

Caring for these incredible animals is our core mission, alongside supporting our year-round residents. It will no doubt be a busy season ahead, so any help we can get to buy pup supplies will be much appreciated

“Pups also need time to rest and conserve energy, so getting too close can result in them being frightened back into the water, which can cause them to waste precious energy and be injured – particularly if they are startled off rocks.

“That’s why it’s incredibly important that, if a pup or seal is spotted, dogs are immediately put on a lead and everyone stays as far away as possible.

“While we don’t believe this was the case for Curry, we do ask that, even if a pup looks like it needs help, people continue to give them space.”

Curry, who was just three weeks old when rescued, was taken to the vet and found to be malnourished and dehydrated, with a high temperature.

He had ulcers in his mouth, an injury to his right flank and a large swelling on one of his joints.

After receiving treatment from staff at the sanctuary, and their vets Head & Head in Helston, Curry made a quick recovery.

He left the charity at a healthy weight of 34.5kg on October 25, marking its first release of the season.

“We are so pleased to see our first successful release of the new season, and, as with every release, it’s always a proud moment for our team,” Ms Cooper added.

“Caring for these incredible animals is our core mission, alongside supporting our year-round residents. It will no doubt be a busy season ahead, so any help we can get to buy pup supplies will be much appreciated.”

People who find a pup on the beach are advised to keep dogs on leads and children away, and not to approach or chase the seal back into the sea.

If the pup appears to be in distress or requiring medical attention, they can contact the Cornish Seal Sanctuary or the BDMLR for advice.

The Cornish Seal Sanctuary works to save grey seal pups from around the Cornish coastline, seeing around 80 pups from September to March each year.

Please log in or register to upvote this article
AnimalsCornwall