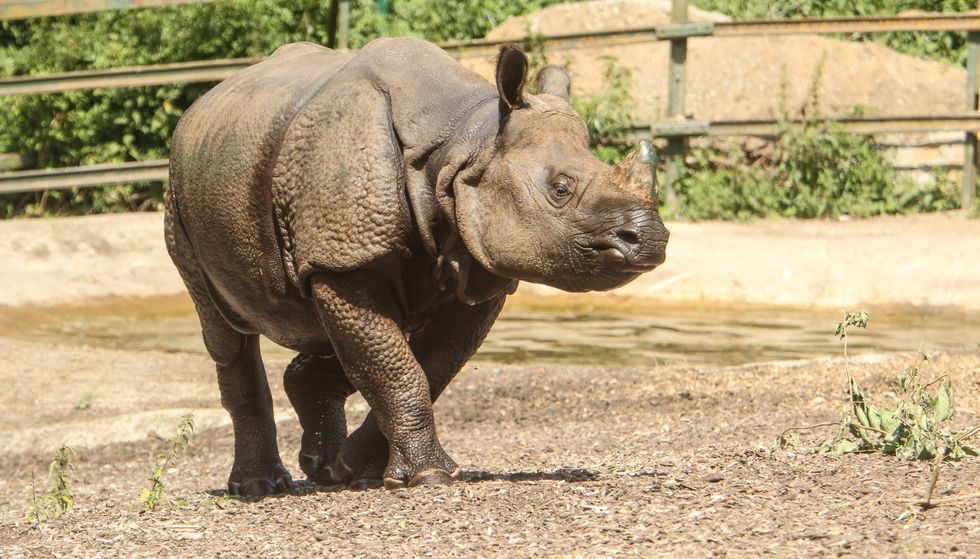 A Kent safari park is the first in Europe where visitors can meet and even feed three species of rhino in one visit.

Orys joins the southern white and eastern black rhinos already in residence at the park, meaning the reserve is now home to 17 rhinos from three of the five rhino species.

Orys the Indian rhino is expected to grow to 2.5 tonnes in weight (PA)

“He was incredibly calm during the move, has settled in amazingly quickly and is already out in the paddock, keenly exploring his new environment.”

Orys has settled into his new paddock on the reserve’s safari route, close to the spectacled bears, so all visitors have a chance to see him.

Orys’s diet consists of straw, leaves and branches harvested from around the Port Lympne estate.

He is capable of easily munching through more than 276lb (125kg) of plant matter every week.

Despite his impressive size, the 1.8-tonne new arrival is still growing. Keepers expect Orys to reach 2.5 tonnes – around the same as two Mini Coopers.

Wildlife fans hoping to get up close to Orys and the other rhinos at the park can book a new “Meet the rhinos” experience, and could even get the opportunity to feed them if they are hungry.

The experience, priced at £100 per person, runs on Mondays and Tuesdays and rhino keepers will be on hand to answer questions about the animals.

This experience is unique to Port Lympne, which is now the only place in Europe where animal-lovers can come face to face with three species of rhino.

Orys’s diet consists of straw, leaves and branches harvested from around the Port Lympne estate (PA)

Indian rhinos, also known as greater one-horned rhinos, are extremely endangered in the wild, and are killed in very large numbers for their single horns.

They are currently classed as vulnerable on the IUCN Red List, with 3,700 individuals worldwide.

Due to international conservation efforts, this once near-extinct species has seen a population rebound, according to the International Rhino Foundation.

Currently found only in the subtropical grasslands and riverine forests of India and Nepal, the species is one of the heaviest land mammals.

They are distinctive for their armour-like folds of skin and are megaherbivores, with a diet consisting almost entirely of grasses, leaves, branches and aquatic plants.

Please log in or register to upvote this article
AnimalsConservationKent

Man gives snake its 'legs' back by building it 'robotic limbs'