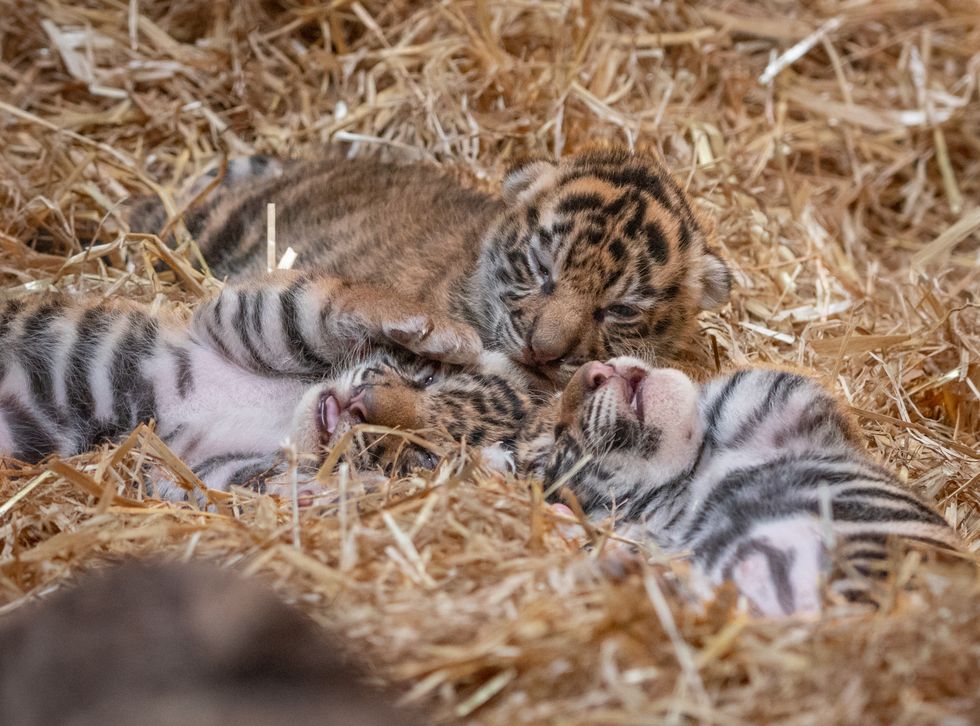 Born in June, the first few weeks of the cubs lives were spent inside the cubbing den of their Tiger Territory enclosure with their mother, Gaysha.

The youngster’s were spotted by keepers when the July heatwave prompted Gaysha to bring the tiny trio outside.

The Sumatran tiger, whose habitat is the forests and jungles of Sumatra, Indonesia, are now classified as critically endangered on the IUCN Red List of Threatened Animals.

There were estimated to be 1,000 Sumatran tigers in the wild in the 1970s but today’s figures show that there are just 300 left.

This means the species faces the very real threat of extinction within the next decade if numbers continue to decline.

There were estimated to be 1,000 Sumatran tigers in the wild in the 1970s but today’s figures show that there are just 300 left (ZSL London Zoo./PA)PA Wire/PA Images - George Cuevas/ZSL London

Zookeepers have been monitoring the three cubs since their birth to make sure they hit their key developmental milestones.

The most recent milestone being cubs opening their eyes, which were closed at birth.

The three cubs will be named after their first health check aged three months – when vets and zookeepers will also be able to determine the cubs’ sexes.

Tiger keeper Kathryn Sanders said: “The cubs are now three-weeks-old and are all doing really well. They’ve recently all opened their eyes – which are always closed at birth – and are hitting all their key developmental milestones.

“Gaysha has clearly decided it’s time for the trio to explore Tiger Territory, although she is still keeping a close eye on all three, alongside dad Asim.

“We’re delighted that visitors are now able to see the stripy cubs, and we’re looking forward to watching as they continue to grow stronger and more inquisitive over the coming months.”

London Zoo are not messing around with their crocodile exhibition