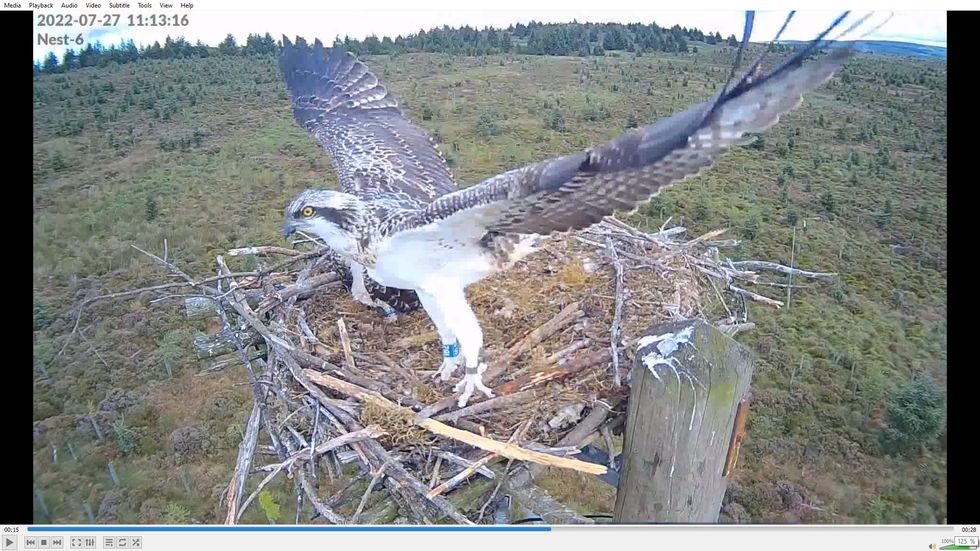 A programme to re-introduce endangered ospreys to a remote corner of England after more than two centuries has seen its 100th chick take to the air.

The milestone was reached when a chick called Fourlaws summoned up the courage to leave its nest and flew over Kielder Forest in Northumberland.

Watched by her timid sister, Fourlaws was captured on a camera over their nest making her first flight on Wednesday morning, returning 35 minutes later.

She had been beating her wings and leaping into the air for days, indicating she was preparing for her first foray out of the nest.

She became the 100th Kielder osprey chick to fly since they were introduced in 2009, when the rare birds of prey were born in Northumberland for the first time in over 200 years.

Once seen throughout the UK, ospreys were persecuted and the species became extinct as a breeding bird in England in 1847 and in Scotland in 1916.

Their recent success has delighted conservationists as Kielder has become a key location for nature recovery, acting as a bridgehead for ospreys to continue re-colonising England.

Tom Dearnley, ecologist with Forestry England, said: “To have 100 chicks successfully fledge in just 13 years and by a bird that had been absent for so long is amazing.

“This is the restoration of a population, a reservoir of animals which can spread outwards creating a huge boost to biodiversity.

“It’s full repayment for the effort invested in building nesting platforms in the years before their arrival and the work of the whole team involved in ospreys at Kielder.

He added: “The significance of this size of population is that locally born birds are now being seen at other locations across the UK, as well as returning to Northumberland to raise their own families. It just shows what can be done with well-managed habitats, foresight and collaborative working.”

Learning to hunt for themselves will be the next stage.

The young ospreys must build up body fat as within weeks they will embark on a hazardous 5,000-mile migration as far south as sub-Saharan Africa.

In two years’ time, the youngsters should make their first return trip to the UK.

Please log in or register to upvote this article
Osprey