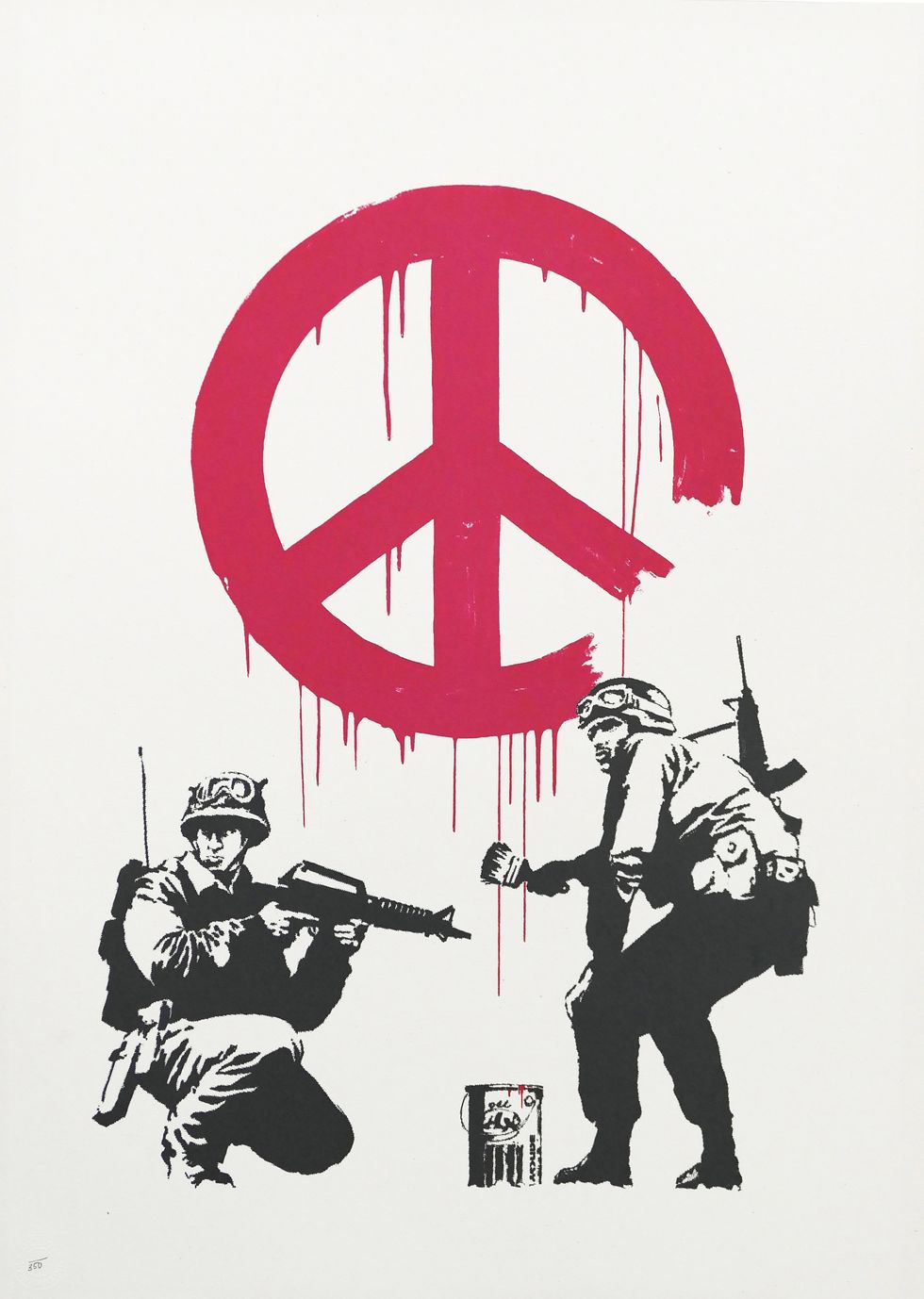 An auction of a rare piece by Bristol-based street artist Banksy to raise money for children in Ukraine is now only accepting bids above £40,000.

The 2005 work CND Soldiers, which depicts two soldiers graffitiing the symbol of the Campaign for Nuclear Disarmament on a wall, is being sold via “silent auction” on the website MyArtBroker.com.

The work was put up for sale by an anonymous donor on Friday with a starting bid of £20,000 and all the money raised will be sent directly to the Ohmatdyt Children’s Hospital in Kyiv.

We are humbled by the incredible generosity shown in a flurry of bids over the weekend, doubling the starting bid in hours

MyArtBroker said on Monday that new bids must be at least double the original starting bid.

Joey Syer, head of urban and contemporary at MyArtBroker said: “We are humbled by the incredible generosity shown in a flurry of bids over the weekend, doubling the starting bid in hours.

Ohmatdyt is the largest children’s hospital in the country and is still providing lifesaving treatment as the crisis continues, MyArtBroker said.

In a statement on its website, the auction house described the continued functioning of the hospital as “a matter of national security” for Ukraine.

As well as treating critically ill children, it is admitting people of all ages injured in Russian attacks.

Elsewhere in Bristol on Monday, a small fleet of boats staged a flotilla on the harbour with the vessels decked out in the blue and yellow of Ukraine’s flag, with banners welcoming refugees.

The stunt was organised by the network City of Sanctuary, which brings together community and faith groups, schools and charities who work to welcome those fleeing war and persecution.

Later, a number of people gave speeches on College Green about their experiences of war.

Krystina Hynda, a 20-year-old Ukrainian who moved to the UK at the age of nine, said she lived in constant fear of news that her family may have been killed.

The neuroscience student said her wider family lived in the western province of Lviv, and only her parents were in Britain.

Many of the speakers at the event criticised the “two-tier” system for refugees fleeing Africa and the Middle East compared to those from Ukraine.

They called for the Nationality and Borders Bill to be scrapped.

Baher Al Abd, 20, fled the war in Syria and moved to the UK in 2019 after spending several years in Lebanon.

Mr Al Abd, who is studying politics and international relations at the University of Bristol, said he was routinely asked by immigration authorities why he hadn’t stayed to fight, or how a refugee managed to get into university.

Some of the most controversial aspects of the Nationality and Borders Bill are measures making it a criminal offence to knowingly arrive in the UK illegally.

It also seeks to introduce life sentences for those who facilitate illegal entry into the country.

The bill is set to enter a protracted phase of “ping pong” between the House of Commons and the House of Lords after peers rejected a number of aspects earlier this month.

The Lords vote to remove clause  enabling the offshoring of asylum seekers to overseas processing centres, similar to those used by Australia.

They also removed the provision making it a criminal offence to deliberately come to the UK without permission, and demanded powers to “push back” migrants crossing the English Channel must not be used in a way that would endanger life at sea.

Please log in or register to upvote this article
BanksyBristolrefugeesUkraine