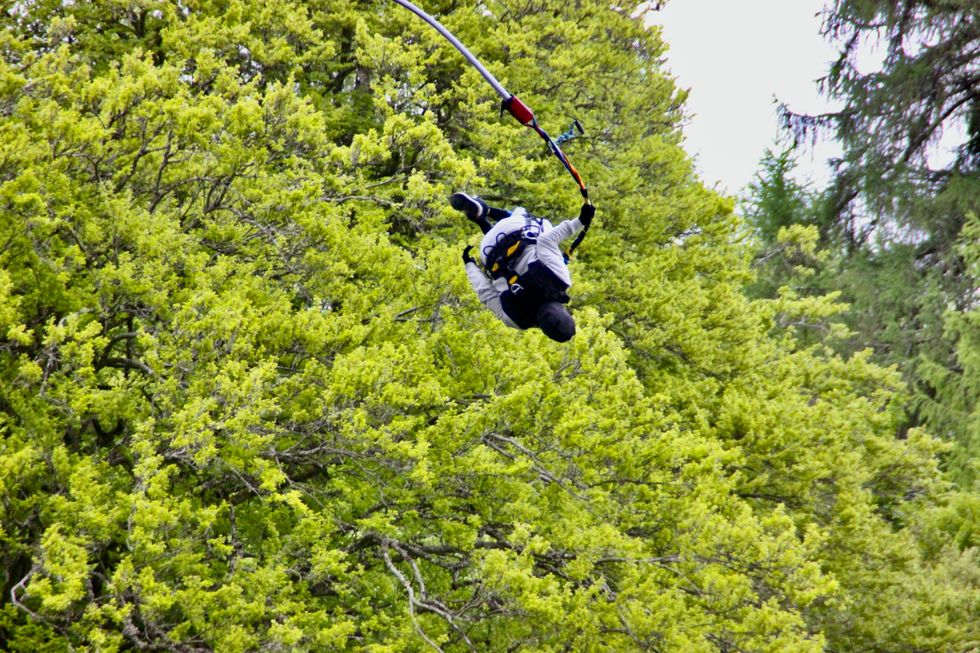 An attempt to beat the world record for the amount of bungee jumps in 24 hours is under way.

Francois-Marie Dibon is poised to break the current record of 430 bounds in one day set by New Zealander Mike Heard at Auckland Harbour Bridge in 2017.

The 44-year-old Paris-born actuary travelled to Garry Bridge in Perthshire on Tuesday morning to take on the mammoth challenge.

Plummeting 40 metres towards the picturesque River Garry below, the next 24 hours will consist of a few breaks, some power naps, but predominantly hundreds of leaps from the Highland Fling Bungee platform for the Frenchman.

With a huge smile on his face ahead of his first jump, Mr Dibon told the PA news agency: “I would be very happy to bring to Scotland a record in bungee jumping.”

He added: “My emotions are calm because I have taught my brain that.

“We can teach our brains new things all throughout our lives.”

When asked how he was feeling about the dizzying task ahead, he replied: “Happy, and in the present.”

Mr Dibon, who currently works in Employee Benefits in Stockholm, Sweden, was afraid of heights as a youngster and struggled to dive from the side of the swimming pool.

He retained this fear well into his thirties, before overcoming it with his first jump 11 years ago.

“It’s interesting to face your fears,” he said.

“And to then overcome them.

Francoise-Marie Dibon retained a deep fear of heights well into his thirties, before completing his first bungee jump 11 years ago (Katharine Hay/PA)

“It’s good to get out of your comfort zone.”

To break the existing record, Mr Dibon will need to complete a bungee jump roughly every 200 seconds (3 mins 20 secs).

Dressed in white and black, the extreme sportsman took his first jump at 10.10am, seconds after the song, The Wind Cries Mary by Jimi Hendrix, sounded out from the bungee platform.

He got off to a good start with smooth jumps and, despite light showers, the Scottish weather held up, breaking into intermittent sunshine.

Mr Dibon will be completing the challenge with 15 crew members from Highland Fling Bungee who are working in shifts throughout the 24-hour period.

“It’s not just an individual extreme sport, it’s an endurance sport which is collective,” he added.

“I am just the jumper.

“I am surrounded by fantastic Scottish and British people.

“We are all working together to ensure safety, jump counting, so really it is a team endeavour.”

Laurie “Loz” Thomas, jump master and operations manager, said: “We have been talking about the record for some time now and we were looking for someone who could jump.

“Francois came here a few years ago, did about 30 jumps, and we thought, ‘who is this guy?’ We knew we had our man.

“He is a great person to work with. Hopefully, as a team, we can do this.”

The marathon attempt, being scrutinised by Guinness World Record judge Joanne Brent, is scheduled to finish on Wednesday morning.

When asked why he felt compelled to take on such a challenge, Mr Dibon said: “I always thought bungee jumping was so cool and so fantastic I could do it all day, so, I decided to put that statement to the test.”