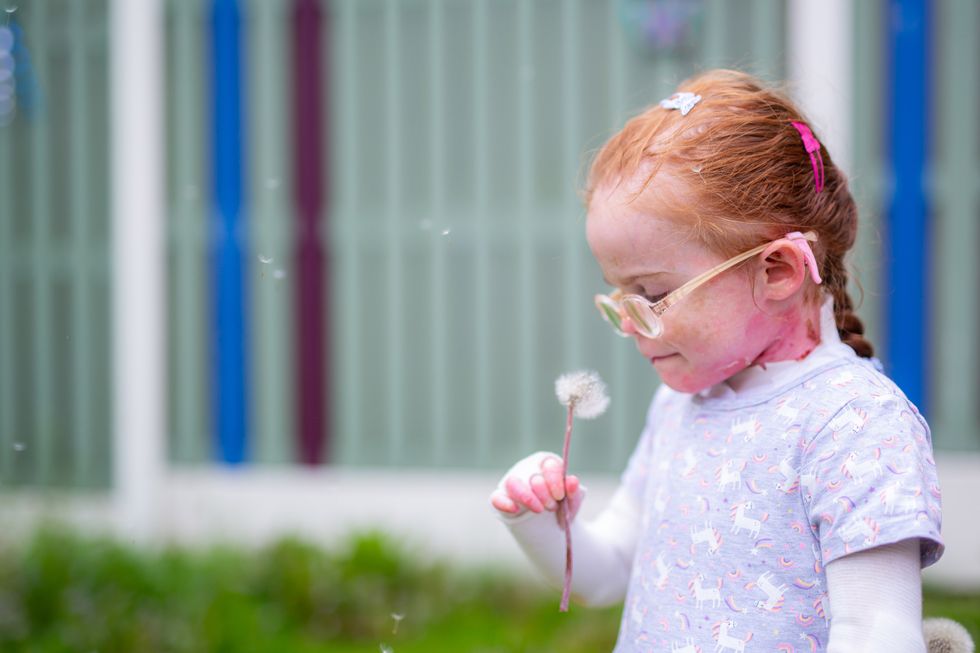 A schoolgirl who suffers from a rare skin disease has become the cover star of a new book explaining the debilitating illness to her new classmates as she starts school this week.

Maria Maciukas, from Dublin, will be waved off by her mother Gunita Spirge on her first day at a mainstream primary school on Thursday.

The seven-year-old was born with the genetic disorder epidermolysis bullosa (EB), a condition also known as Butterfly Skin due to the fragility of patients’ skin.

She needs new bandages every day to cover her blisters, which can break out at the slightest touch.

Maria spent her first year at school at the Central Remedial Clinic (CRC) in Clontarf, Dublin, where there are specially-equipped classrooms designed to help students with medical needs.

After being enrolled at Scoil Bhride Cailini, a mainstream primary school in Blanchardstown, Maria’s mother began to worry her little girl would struggle in her new surroundings.

“There was a lot of unknowns,” said Latvian-born Ms Spirge.

“Will this really work out? There are so many medical challenges with her condition. And everyone in her classroom needs to be very gentle.”

Ms Spirge contacted EB charity Debra Ireland for help and they decided to produce an illustrated guide to EB especially for staff and pupils at Maria’s school.

On the cover of the brightly-coloured book, entitled Maria’s Story, is an illustration of the schoolgirl wearing butterfly wings and her bandages.

Inside, she is described as a little girl who likes to laugh and play but because she was born with a rare disease, her fellow pupils are asked to be very careful around her during lessons and in the playground in case her skin gets damaged.

Her classmates and teachers also learn that even though Maria wears bandages every day, EB is not contagious.

Ms Spirge described the help she and her family have received from Debra Ireland since Maria’s diagnosis as “invaluable”.

It can take up to three hours a day for Ms Spirge to change her daughter’s dressings.

The charity’s family team worked for two years with Maria’s new school and medical teams in preparation for her first day at senior infants.

Debra Ireland chief executive Jimmy Fearon said: “Maria is moving from a school equipped to handle almost every medical need she has, to a school where, up to now, there was nothing in place.

“We worked with the school, connecting them with medical teams, therapists and everyone Maria needs to be safe.

“This does not happen easily.”

Photographer gets dragged out of Tory conference by security